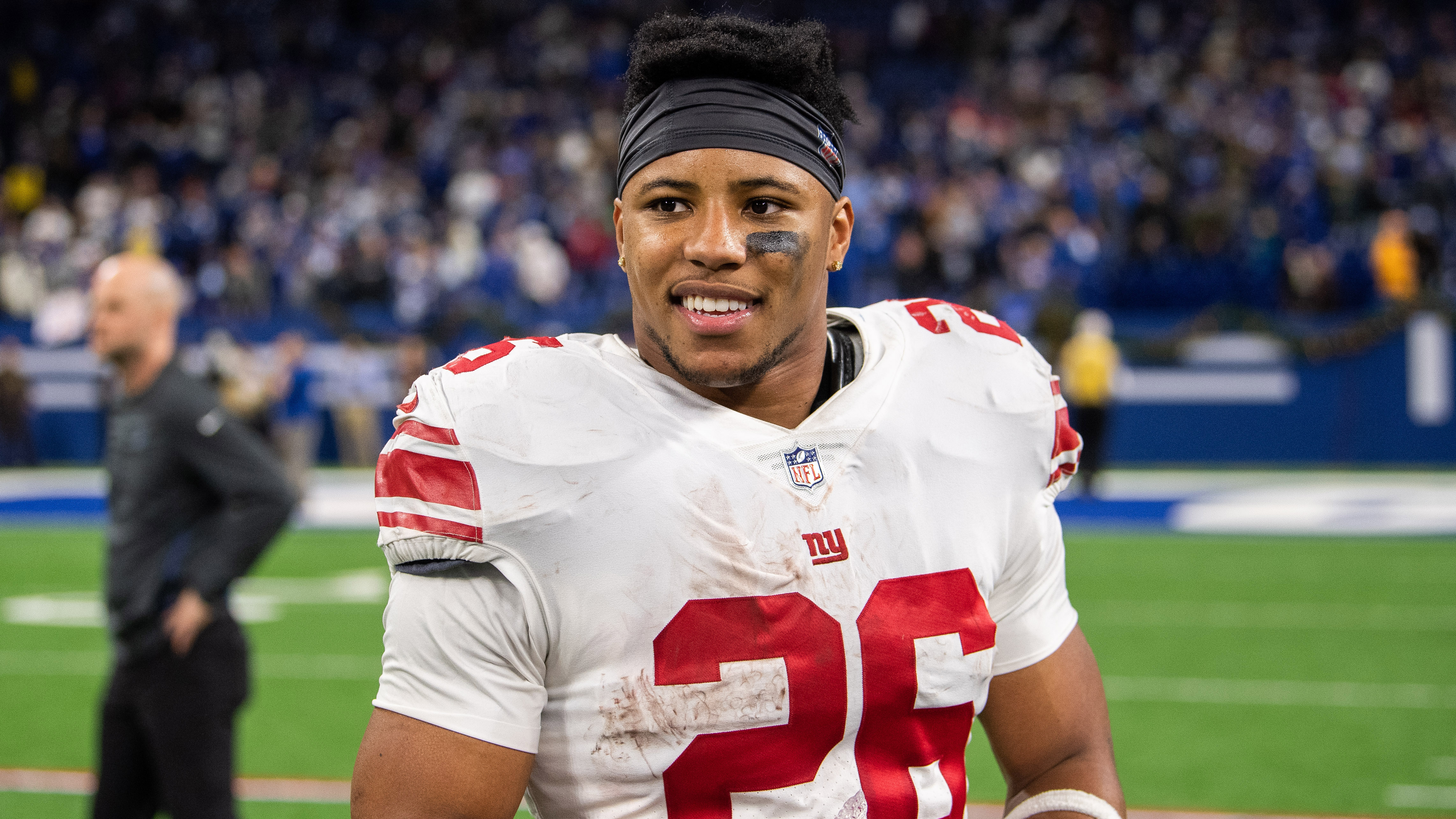 Detroit has given up 161 yards per game this season. Justin Fields burned them for 147 last week, Rhamondre Stevenson rumbled for 161 last month, and Rashaad Penny got them for 151 and two scores way back in September. One key similarity among those three players? None are Saquon Barkley.

He leads the league in rushing yards and runs of more than 15 yards, is averaging over 100 yards per game, and has accounted for 36.5% of the Giants’ total yards this season. Simply unbelievable.

The Giants had no trouble leaning on their bellcow against the Texans’ porous front for a whopping 35 carries last week. They’ll probably lean on him again, game-script willing, and let him take over the game.

His incredible season has led to big returns for investors too. Barkley’s stock is up more than 100% so far this season with his 5x Multiplier.

The saga continues. I made a promise to highlight Jones every week until you guys listen to me and take out a Short position. He hasn’t played a single snap in two weeks, two games in which the Bears trailed throughout. He’s a 25 year old rookie. He’s struggled with ball security. What else do you need to hear?

His share price has dropped 25% since being drafted and 11% in the last month. He’s still accrued no Mojo Value whatsoever during his brief time in the league and his future value is comparable to Keenan Allen. Now, I know Allen is trending in the wrong direction but he might have more catches in his first game back than Jones will get the rest of his career.

I wish I was kidding.

‘Hollywood’ Brown could make his return to the Arizona Cardinals Monday evening against the 49ers. This makes now the prime time to Go Long ahead of his share price inching back up once he’s officially activated.

Brown’s stock is down 14% on the year after missing the last 4 weeks with a foot injury. Yes, he has to share targets with DeAndre Hopkins and Rondale Moore, but it is not far-fetched to still expect big things from him in the second half.

The last time he played with Kyler Murray was in 2018 and Brown accounted for 27% of Oklahoma's targets. The Cardinals are floundering and need a big boost, Brown could be that boost.

Don’t forget to take advantage of the available 5x Multiplier to really boost your investment.

Baker Mayfield starting at QB for the Panthers makes Moore worth Shorting before Week 11, especially with his 10x Multiplier.

Moore has averaged just a 44% catch rate with Mayfield under center and the Ravens’ defense has allowed just one TD to a WR in the last three weeks.

Moore is currently the 22nd highest priced receiver on Mojo in his 5th-year with just under $8 in banked value. Going Short is the best option until we see him demonstrate a better connection with Mayfield or leave the disjointed Panthers’ offense.

Cooper Kupp is obviously out with injury, and might be done for the year. While Skowronek might not be the big name "next man up" everyone is looking for, I have a feeling he's going to get the job done.

He’s been a pleasant surprise for the Rams who were expecting big things from Allen Robinson. Skowronek’s presence has decreased a bit since Van Jefferson has returned from injury, but he sneakily saw seven targets last week.

His floor is high with Kupp out and his cheap share price means any legitimate production could lead to huge gains.

With the exception of the Week 4 game against Tampa Bay, Edwards-Helaire has not had more than 10 rushes in a game this season. He had a season-low four rush attempts last week and seems to have been passed by rookie Isiah Pacheco on their depth chart.

Edwards-Helaire’s stock has gone down 7.3% over the last week (that’s 73% with his 10x Short Multiplier), while Pacheco’s is up 4.8% (13% with 3x Multiplier.) If a user went Short on Edwards-Helaire with $800 before last Sunday’s game that investment would be worth almost $1,400 right now!

London has superstar written all over him. Similarly to his teammate Kyle Pitts, London has seen a HUGE target share this season with little results to show for it.

At 26.8%, his target share is 12th highest in the NFL. That’s higher than other elite WRs Ja’Marr Chase and Deebo Samuel.

Now is the time to Go Long on London. This Falcons team isn’t passing the ball much with Marcus Mariota at the helm, but London’s outlook will improve astronomically when they finally find a franchise QB.

He has the talent, he just needs the opportunity.

Listen, it’s tough to fade players who have had such a successful career, but it’s time to say goodbye to the Robinson we once knew.

The star WR we fell in love with in Chicago just isn’t himself anymore.

We’re all guilty of brushing off his poor 2021 with the Bears in the hopes of being rejuvenated by Sean McVay and the defending champion Rams.

However, things have somehow gotten worse. Robinson is currently 165th in yards per route run, behind receivers like Dante Pettis, Quez Watkins, and DeAndre Carter.

His career appears to be on the brink, yet the market still expects him to earn $2.89 in Future Value, or more than two average seasons worth of production. Use his opportunity to Go Short.

Prices are current as of 11/18/22 at 11:00 AM EST
All trades you make are with Mojo, which sets the lines as the “house”. Recommendations are for entertainment purposes only. Please use your own judgment and data to make trades. 21+. Must be in NJ to trade. Gambling Problem? 1-800-GAMBLER
About the Author: