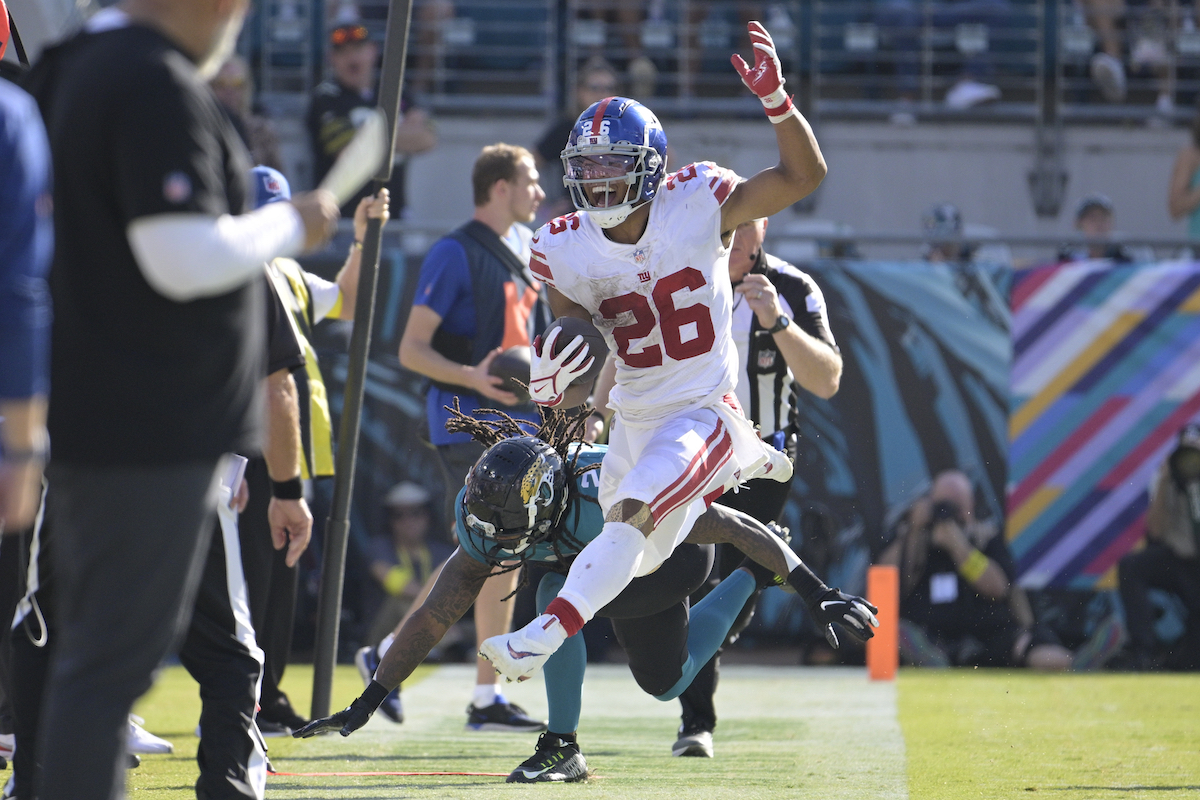 The Giants are back in action this week after their bye and welcome the Texans to East Rutherford. Houston has allowed an unthinkable 180 yards per game on the ground! That is by far the worst in the league with the Lions checking in next at 149 yards per game.

Barkley has tormented far better defensive units and should have his way with them on Sunday. Tack on his Multiplier to supercharge your gains!

I made a commitment to you guys to highlight Jones as my short until each and every Mojo user opened a position. He did not play a single snap on Sunday in a game where the Bears trailed for 53 total minutes. Dante Pettis, N’Keal Harry, and newcomer Chase Claypool have passed him on the depth chart. He has just three receptions as a 25 year old rookie and fumbled multiple times after being relegated to return duty.

Yet, his $4 in Future Value is comparable to Romeo Doubs and Josh Palmer! Jones could be out of the league within two seasons with less than 20 career receptions. There is almost a 0% chance he earns this value.

Hallo! The Tampa Bay Buccaneers are taking on the Seahawks in Germany this weekend and it is time for Chris Godwin to have a day.

With no touchdowns so far this season, it’s easy to dismiss Godwin, but it is hard to ignore his 46 targets since Week 6. Last week’s 7 catches for 36 yards against the Rams are nothing to run home and brag about, despite Tom Brady’s game-winning drive seeming to have switch the mojo of the Bucs offense (wink, wink).

That Seattle defense has given up over 1,100 yards to wide receivers through Week 9. Realistically, Brady will be equally targeting Mike Evans and Godwin this Sunday, but with a FREE 15x Long Multiplier available on Godwin the ceiling is too high.

Now it’s time to be extremely hypocritical. Yes, Chris Godwin without a touchdown through Week 10 still inspires confidence. However, Michael Pittman Jr. not scoring since Week 1 is going to be an automatic Short.

Indianapolis had one of the worst offensive performances in franchise history last week which led to the firing of head coach Frank Reich. The general feeling surrounding the Colts after hiring Hall of Fame center and HS coach Jeff Saturday is chaotic which makes this the perfect time to profit off of their downfall.

Pittman is already down 3% on the week while QB Sam Ehlinger is down over 16%. And yet, Saturday stated that he will be his QB moving forward.

Through two games with Ehlinger, Pittman has seen just 15 targets for 10 catches and 75 yards. It would be to see Saturday turn this team around on Sunday (ba dum tss), I just wouldn’t count on it.

Palmer should have been a Go Long buy last week. Since Mike Williams and Keenan Allen's injuries, he’s been a safety blanket for Justin Herbert and the Chargers offense.

Last week, Palmer had eight receptions on 10 targets and broke 100 yards. He also averaged 10.6 yards per target, showing that Herbert wasn’t shy about looking his way down the field.

Palmer has more banked value at $1.20 than fellow 2021 draft class member Nico Collins ($1.13), who's also been a reliable target for Davis Mills and the Texans. Their future values only differ by $0.11, with Palmer coming in at $4.93 right now.

The injuries to Allen and Williams are rough for the team, Palmer has solidified his spot on the offense. Our Mojo team even predicted that Palmer would break out this year back in July.

I expect the Palmer-Herbert connection to have a spark Sunday night, even against the 49ers tough defense.

Back in October, Harris was averaging fewer yards after contact per attempt than Mark Ingram, DeeJay Dallas, and Jaylen Wallen. Plus, we can’t forget that one play where Harris gained 0 yards with plenty of green grass in front of him. He’s broken.

Even though he has more banked value ($3.42) than someone like Rhamondre Stevenson ($2.64), their future value difference is only $2.20. Stevenson could definitely be a guy who creeps up to Harris’ level.

Going short on Harris right now looks like a layup. He is not performing at all.

Prices are current as of 11/11/22 at 1:00 PM
All trades you make are with Mojo, which sets the lines as the “house”. Recommendations are for entertainment purposes only. Please use your own judgment and data to make trades. 21+. Must be in NJ to trade. Gambling Problem? 1-800-GAMBLER
About the Author: