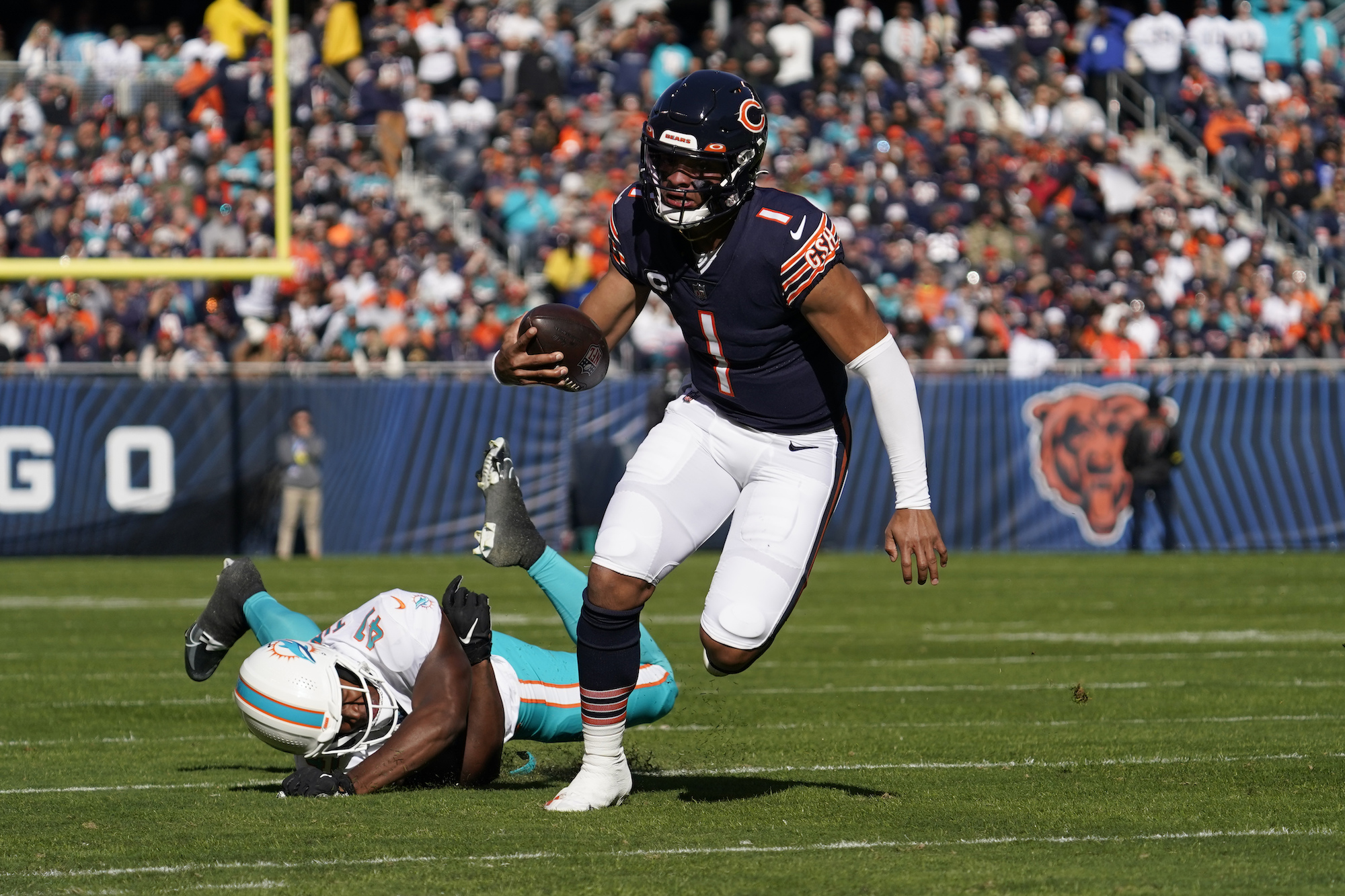 Are we witnessing the birth…of a star? I don’t want to get ahead of myself, but Fields looked great on Sunday. He became the first QB in NFL history to throw three touchdowns and run for more than 150 yards. Head coach Mike MacDaniel was getting tired of Fields’ flash.

This game put an exclamation point on the best month of Fields’ career. Over his last four games, he’s completed 61% of his passes with seven TD versus just two interceptions plus over 400 rushing yards.

Not one, not two, not three, not four, but FIVE touchdowns for Mixon on Sunday. He was just the sixth running back since 2000 to reach that mark joining Jonathan Taylor, Alvin Kamara, Jamaal Charles, Clinton Portis, and Shaun Alexander.

Mixon had a 15x Multiplier available on Sunday. So, users who invested with that Multiplier would have seen an 80% rise in their initial investment from this game alone. If you have conviction in a player, Multipliers are how you make money on Mojo in a short period of time.

Penny stock SZN. Marshall seemed to be an afterthought after not seeing more than two targets in any single game after Week 5 of his rookie season and then being inactive for seven of his next 16 contests.

Suddenly he’s being featured in this offense after Matt Rhule and Robbie Anderson were ousted. He’s seen a snap share over 85% for three straight weeks. His target share has climbed over 20% in back to back games with 15 coming in total, his most ever in a two week span.

Now, his price has more than doubled over the past month and is up 141% overall! Users that invested with his 2x Multiplier would be up 282%, so a $500 investment would be worth more than $1,400 right now!

Dragon-slayer: Daniels and LSU shocked the world Saturday night, defeating their bitter rival Alabama. He completed 69% of his passes for 180 yards and two scores along with another 95 yards and TD on the ground. No plays were bigger than his 25 yard scamper to start LSU’s only overtime drive followed by a walk-off two-point conversion.

Daniels entered this season as an NFL afterthought despite great athletic tools. His strong season has sent his stock up 37% to $4.83, higher than Sam Howell who was a fifth round pick last spring. So, our market feels Daniels very well could be a Day 3 pick in this upcoming draft.

Like all college QBs, Daniels has a 3x Multiplier available. So, users who knew he would break out after transferring to LSU could have already doubled their money this season!

More college news here as Nix continued his spectacular season with 4 more TD and 290 total yards on Saturday. He completed better than 80% of his passes and holds the best adjusted completion percentage in the nation.

This has been a magical season for Nix who finds himself in the thick of the Heisman race and has Oregon thinking about the College Football Playoff. His stock is up 35% over the past month and a $500 investment in Nix back then with his 3x Multiplier would be worth $875 right now.

Ehlinger could not contend with Bill Belichick’s defense and played poorly for the second consecutive game. He’s thrown for just 300 yards in two weeks without finding the endzone and may not be the Colts’ starter for much longer.

That fear along with his lack of production has sent his share price tumbling after a massive initial spike of more than 200% when he was named the starter.

To complicate matters further, Frank Reich was fired to make way for new head coach Jeff Saturday. Ehlinger does not seem like the answer in Indy and will fall more if/when he’s relegated back to the bench.

Arrowhead Stadium was not kind to Willis. He completed just five passes, none to a wide receiver, and looked like a deer in headlights when the Chiefs stormed ahead during overtime.

In two games as a starter, Willis has attempted just 26 passes and completed 11. The Titans have been working very hard to conceal his inability to pass the ball and his stock is falling as a result.

One caveat, the Titans’ receivers are also falling as a result. Robert Woods has caught just one touchdown one the season and is down 6% over the last month. Nick Westbrook-Ikhine is an afterthought in their offense and down 17% this month! Willis is dragging down their entire passing attack.

As the Texans continue to lose games, Mills’ likelihood of being their starter next year dwindles. They are currently in pole position for the number one overall pick in next spring’s draft and their choice of Bryce Young or CJ Stroud.

The shame is that Mills hasn’t even played that poorly. He is tied with Jalen Hurts for the fewest Turnover Worthy Plays in the league and has a better Big Time Throw percentage than Justin Herbert or Kyler Murray. There could be an opportunity to buy the dip on Mills when it becomes clear the Texans will move on if you still think he has a future elsewhere.

Back to the well: Valdes-Scantling has been a popular short pick by our analysts and is moving down consistently as his usage shrinks. Despite running his most routes of the season, Valdes-Scantling was targeted a season low one time on Sunday night.

The Chiefs and Patrick Mahomes faced Cover 2 more than any other team last week. That is mostly in part because they were losing most of the game and Mahomes’ prolific deep passing game. Still, it seemed as if they were just having Valdes-Scantling running cardio to clear a safety and work the ball in the intermediate zone.

Nevertheless, Skyy Moore, Justin Watson, and newcomer Kadarius Toney all worked their way onto the field as well, further muddying the waters. Valdes-Scantling still has more future value ($4.73) than banked ($4.33) and is unlikely to more than double the 2,700 yards and 14 TD he’s already amassed. This is a great opportunity to Go Short.

Another favorite of mine, Jones did not play a single snap on Sunday during a game where the Bears trailed throughout and needed to push the ball. He was behind Dante Pettis, N’Keal Harry, and newcomer Chase Claypool on the depth chart.

He could eventually be pushed out of the league with less than 20 or so career catches, yet his future value is greater than $4.00. That is comparable to recent Chargers breakout Joshua Palmer and Packers rookie Romeo Doubs. Jones is nowhere near the caliber of these players and has far less of an opportunity to produce.

Prices are current as of 11/9/22 at 12:00 PM
James Schiano is a full time employee of Mojo. All trades you make are with Mojo, which sets the lines as the “house”. Recommendations are for entertainment purposes only. Please use your own judgment and data to make trades. 21+. Must be in NJ to trade. Gambling Problem? 1-800-GAMBLER
About the Author: