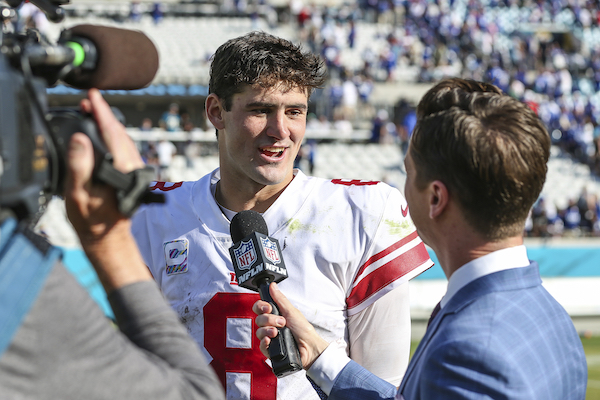 1W Price movement is based on movement with Long / Short Multipliers.‍

Are we watching the birth of a franchise QB? Jones played another stellar game on Sunday in which he ran for 100 yards (the first Giants QB to ever hit that mark), threw for 200 more, and led his league leading fifth game-winning drive of the season. Hat tip to Andrew Thomas, who has emerged as an elite blind side protector.

Jones is having a remarkable season by all accounts. He has the 11th best EPA/play among QBs and that number jumps up to sixth in the fourth quarter. Jones is also 8th in Completion Percentage Over Expected, somewhere he’s struggled in the past.

That’s not to mention his efficiency on the ground. He’s sixth in the entire league, including running backs, with 5.9 yards per carry and has 15 carries of 10 or more yards, fifth most.

There seems to be a genuine step forward being taken here and Jones could be playing himself right into a new contract with the G-Men.

Wow, WOW! This is the biggest movement we’ve seen on Mojo since launch by A LOT and it came in the form of an elevated backup QB (arguably the third string QB!). Frank Reich defiantly announced that Ehlinger would start in place of Matt Ryan for the rest of the year.

However, the question remains how good can Ehlinger be? He lit up the preseason and put himself on the radar for a move like this. All he needed was Ryan to play like he was approaching 50 years of age rather than 40 to catalyze this change.

The Colts offensive line is not great, but their weapons could be. It will be interesting to see if Ehlinger proves himself worthy of starters’ reps beyond this season.

Talk about your good ol’ fashioned double whammy: Etienne completely took over the Jaguars’ backfield Sunday with 14 out of 15 RB carries and James Robinson was traded to the Jets on Monday.

With no competition at all, Etienne should run wild. He leads all running backs in yards per touch, is second in yards per attempt, and is in the top 10 in both missed and broken tackles per attempt. He looks like a potential superstar.

A bittersweet riser since the offensive scheme is likely changing, Campbell finally broke out after three long years of injuries and poor production.

Campbell has been targeted 23 times over the last two weeks. His previous SEASON high was 24 during 29. Those targets have turned into 17 catches, 127 yards, and two TDs.

He is playing ahead of supposed WR2 Alec Pierce and the Colts coaches seem committed to getting the ball in his hands. It will be interesting to see his usage with Ehlinger under center.

Fields…looked…great on Monday night? No really, he did. That stats still don’t pop, but Fields made multiple plays off-schedule, outside the pocket, and in the face of pressure en route to steam rolling Bill Bellichick’s vaunted defense.

There were some clear usage trends to note that could signal more good play from Fields. Bears’ coaches called 11 designed runs for Fields, his previous career high was just five. This was also his fourth straight game with at least 20 passing attempts and the Bears spent most of the second half winning by multiple scores.

This finally looked like the explosive QB we saw at Ohio State and I’m bullish on Fields if these schematic changes stick.

No way to sugar-coat this, injuries suck. Hall tore his ACL and will be out for the season: a disaster in every sense of the word. His future value is still among the top five RBs, but losing a year of production in which he looked like one of the league’s best offensive players is brutal.

Williams and Metcalf’s injuries are less serious, they are each expected to miss multiple weeks with ankle and knee injuries, respectively.

Easy one: Christian McCaffrey being traded to San Francisco means that Mitchell is no longer considered a potential RB1. Instead, he will have to compete with Jeff Wilson Jr. upon return.

Now he’s just a late round, slightly undersized, oft-injured running back with talent and big-play ability. His future value dropped below players like Jamaal Williams, Alexander Mattison, Michael Carter, and Kenneth Gainwell, among others.

I highlighted Jones’ shockingly high share price during my Monday Night Football preview and will hammer that point home.

He is a 25-year-old rookie, has seen just two targets in seven games, has struggled as a returner, and plays in one of the most conservative offenses in the league. It is highly unlikely he ever returns positive value.

Interestingly enough, Ryan’s stock still has plenty of room to fall. The Colts’ definitively said that Ehlinger would have the opportunity to start for the rest of the season, but the market still expects $3.72 in Future Value for Ryan.

That is assuming he will play next year and that’s a fair assumption given his $35 million cap hit in 2023 with $18 million in dead cap. Still, the language used by the Colts this week makes me think Ryan will not be back. And his play tells me no one would trade for him next offseason, either. So, we’re looking at a very expensive back-up QB I’d love to Go Short on.

Harris returned on Monday and was very clearly outplayed by Rhamondre Stevenson. Game script leaned towards Stevenson, a better receiver, but Harris did not even see the normal share of his early down or goal line work. It seems like there’s been a changing of the guard.

Prices are current as of 10/26/22 at 2:00 PM EST
James Schiano is a full time employee of Mojo. All trades you make are with Mojo, which sets the lines as the “house”. Recommendations are for entertainment purposes only. Please use your own judgment and data to make trades. 21+. Must be in NJ to trade. Gambling Problem? 1-800-GAMBLER
About the Author: