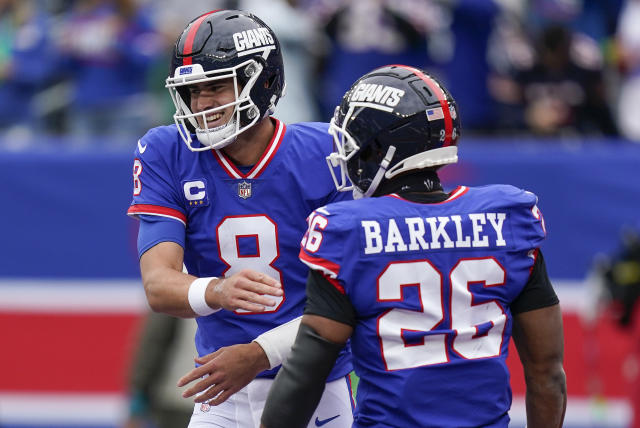 Sometimes a QB plays himself into a second contract by simply winning, because he ensures that his team won’t have the draft capital to replace him from the college ranks.

That’s the path that Daniel Jones ($25.88) is on in 2022. Right now, according to Tankathon, the Giants would pick 27th if the season ended today. That’s not nearly high enough to draft one of the top three prospects in the upcoming draft: C.J. Stroud, Bryce Young, Will Levis. (Side note: VERY soon you can invest in the pro careers of those college QBs!) The Giants also will not be able to put a trade package together to get in to the top five if they are anywhere near the 27th pick, unless they sacrifice first-round picks in multiple years.

While Jones this year is basically average (14th in QBR, 18th in EPA per drop back), look at his mediocre supporting cast. Here are his top targeted WRs (in order of targets):

So he’s mostly throwing to the type of receivers you’d expect to be running in the preseason, not the regular season. These guys are backups, with the possible exception of Slayton, who the Giants have treated like a backup.

Jones is supported by excellent coaching by new headman Brian Daboll and offensive coordinator Mike Kafka. But you can only be so good with this level of WR play.

To illustrate the point, let’s look at defending two-time MVP Aaron Rodgers, playing with a receiving corps that is arguably in the class with the Giants (I think the Packers receivers are better, but it's fairly close). Rodgers’ QBR right now is actually BELOW Jones — 44.6 (20th) compared to Jones’ 52.0 (14th). If you use passer rating, Rodgers has an edge but not a massive one (95.8 to 85.7). Last year, with a top WR in Davante Adams, Rodgers was 74.1 in QBR and 111.9 in rating. I’m not saying the Giants will add a Davante Adams, but it does illustrate how big of a deal it would be if the Giants can upgrade at the position for Jones. (Maybe that's Wan'Dale Robinson or Kadarius Toney, but don't hold your breath!)

It’s not all perfect. Jones' sack rate is terrible: dumped on 8.9% of drop backs, fourth worst rate in the NFL, according to TruMedia. The Giants do not pass block well — 20th in pass block win rate. (Note the Giants run block win rate ranks 27th so the line is still a problem as it’s been throughout Jones’ tenure.) And the Giants receivers can’t win at all, never mind quickly, which also causes sacks. The key to efficient, quick passing is forcing teams to play zone defense. Opponents have played man against the Giants on 81 of 168 drop backs, 48.2%. That’s about the league average rate, but Jones has been dumped on these plays 10 times (12.3% nearly twice the league average).

Jones is a plus athlete. QBs who can run tend to get sacked at a higher than league-average rate because they think they can run themselves out of sacks instead of just throwing the ball away. But the good news is he can make plays with his legs at an elite level: he’s second among QBs in rushing first downs with 21. Jalen hurts has 22. (Nick Chubb leads league with 27.)

The biggest question is whether he's improved, even with the bad hand he’s been dealt for his career and the poor supporting cast he has in 2022 from a passing standpoint. Well he’s much better than last year (47.5 QBR then 52.0 now). But for better context let’s look at league QBR by year during Jones’ career, according to ESPN:

So Jones has improved even more than the 2021 to 2022 number suggests with his new coaching because passing is down this year overall.

When you look at the entire picture, the Giants are probably going to be forced to stick with Jones long-term. The coaching infrastructure is there. Big Blue now has to support him with better protection and, especially, much better receiving talent. If the Giants do, the data suggests he can move from middle of the pack to a borderline franchise QB somewhere in the top 10.

If the Giants keep winning, he will be a great player to choose to Go Long on Mojo since a) his price has dropped so much since everyone assumes he's a goner next year and b) his future expectations basically assume he transitions to be a career backup after this season. With his free 10x Multiplier, even a modest 5% gain this season would yield a 50% profit.

Prices are current as of 10/12/22 at 3:00 pm EST
Michael Salfino is a Contributing Writer at Mojo. All trades you make are with Mojo, which sets the lines as the “house”. Recommendations are for entertainment purposes only. Please use your own judgment and data to make trades. 21+. Must be in NJ to trade. Gambling Problem? 1-800-GAMBLER
About the Author: