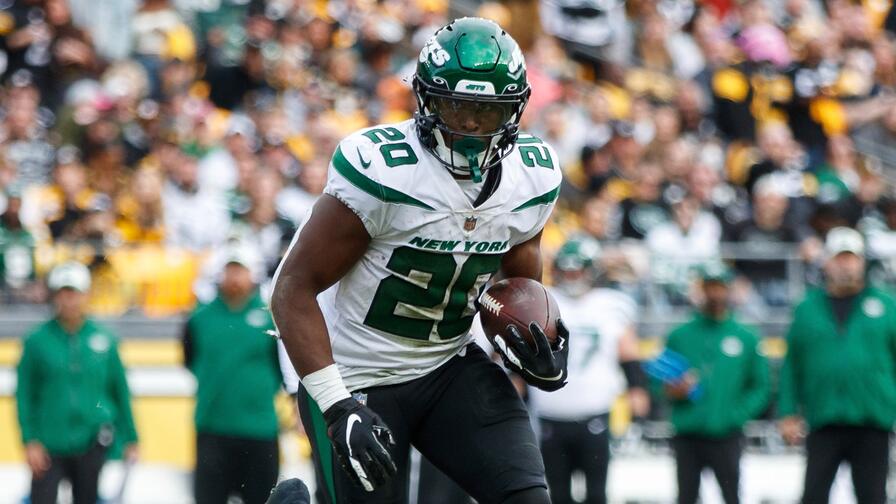 The NFL season is an inherently small sample size, but we have enough data to start to make reasonable predictions for young players. This analysis uses age, draft capital, and production through six weeks based on closest historical comparable players. By using some of these “comps”, I can start to gauge ranges of career outcomes, which can unearth undervalued assets. These are three such young running backs.

This is over elite running backs like Jonathan Taylor, LeVeon Bell, and Clinton Portis.

Hall had an elite profile coming out of college because he had early college production, with workhorse size and elite athleticism. He checked all the boxes and this early production is just the icing on the cake.

Due to his age and projected career arc, Hall should have the highest future Mojo value of any running backs. Hall is currently the 17th highest priced RB on Mojo and there’s clearly room for growth with Hall’s price.

His closest comparable player according to Player Profiler coming out of college was Jonathan Taylor. Right now Taylor is priced with a share price of $17.02 on Mojo.

I would Go Long on him with a 3x multiplier right now and expect him to reach a share price in the top 10 of all running backs by season's end.

What Brian Robinson has done has been nothing short of miraculous to be able to play a football game just months after getting shot.

But what he has actually done on the football field has been very impressive. He is one of 11 third round running backs to see 15+ carries within their first two career starts of since 2000.

Robinson has shown he’s on the fast track to becoming a workhorse right away, which is an extremely positive sign.

Past players to get this much work early on include Kareem Hunt, David Montgomery and Steve Slaton. Montgomery is priced at $11.69 and Hunt is priced at $13.25. This shows how much upside there is for Robinson for his price to go on Mojo.

That list was also littered with some busts, but some of the less productive guys like Tevin Coleman still had nice careers.

Robinson has a wide range of outcomes, but the team has shown faith in him to be their starting running back ahead of an established running back in Antonio Gibson.

Robinson likely doesn’t possess the upside to be an elite NFL running back, but similar to a player like Damien Harris ($8.45) be a startable NFL running back during his rookie contract with upside to playing in the league longer.

Robinson is a buy for me right now at his current price at Mojo. He will likely continue to climb to at least the $8ish mark the rest of the season.

Travis Etienne has actually been historic through his first six career starts. He ranks third all-time for first round RBs in yards per touch (min 60 touches) through their first six career games.

The other players in the top four include Bo Jackson, Adrian Peterson, and Saquon Barkley.

Etienne has an impressive 3.13 yards after contact per rush this season that trumps his teammate James Robinson at 2.69.

He’s still only seeing a snap share flirting with 50% over the past three weeks, but considering he’s only six games into his career and much more productive than Robinson at this point, it wouldn’t be a surprise to see Etienne start to earn more work as the season continues.

A player who is a close comparable profile wise is D’Andre Swift. Swift is currently priced at $11.87 on Mojo showing that there’s plenty of room for Etienne to grow. On the high-end of outcomes is Alvin Kamara priced at $19.91.

Etienne is likely not going to be a running back who commands 25+ touches a week, but should be efficient on his touches and due to his speed offers explosive play ability that is rewarded on Mojo.

Etienne is priced closer to his floor right now and I would be taking the opportunity to Go Long at his current price and use a 3x multiplier.

If Etienne continues this trend, he will vastly increase his price from the 34th ranked running back on Mojo.

Prices are current as of 10/17/22 at 10:00 pm EST
Dalton Kates is a full time employee of Mojo. All trades you make are with Mojo, which sets the lines as the “house”. Recommendations are for entertainment purposes only. Please use your own judgment and data to make trades. 21+. Must be in NJ to trade. Gambling Problem? 1-800-GAMBLER
About the Author: