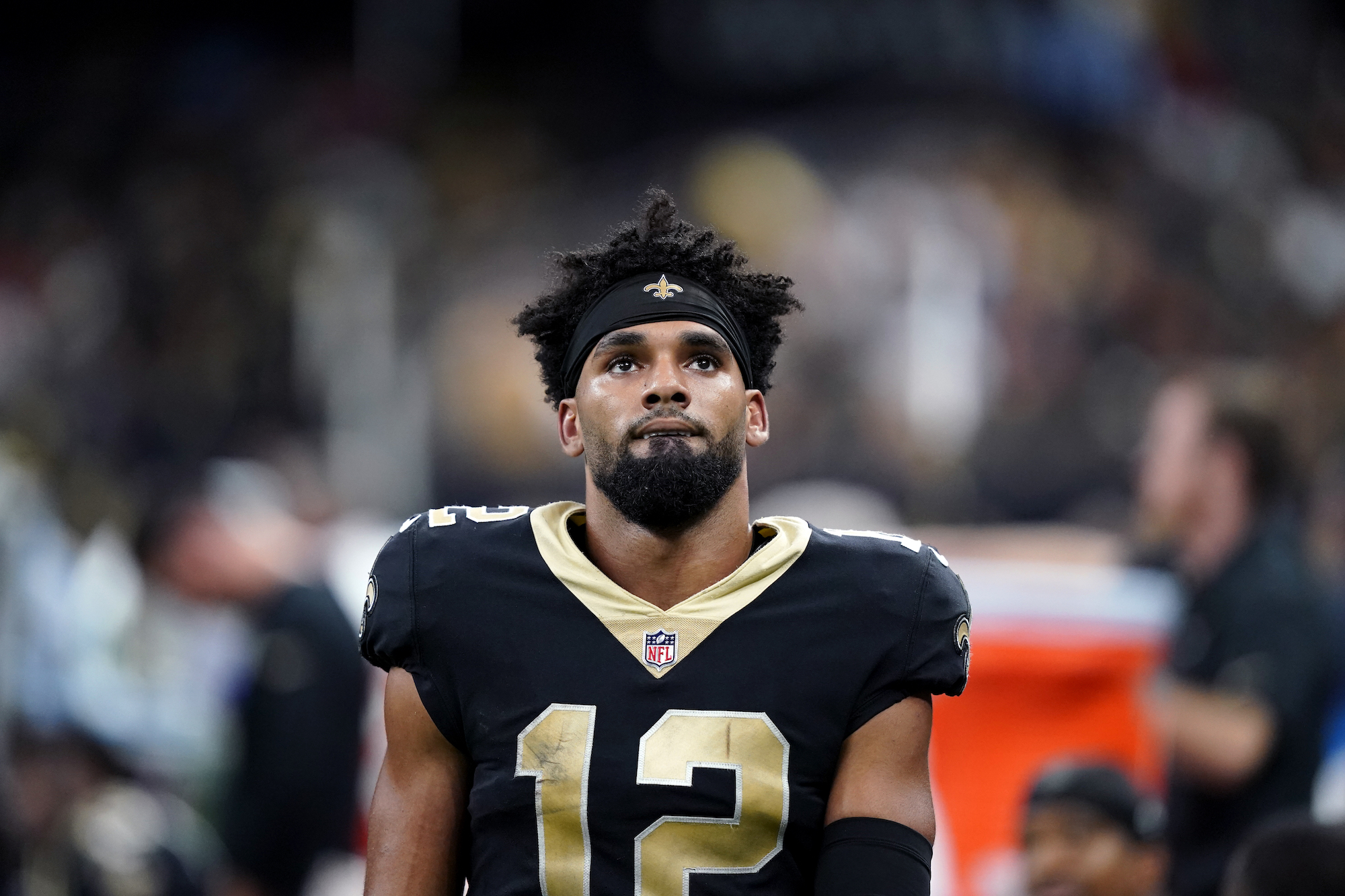 Last week was a rough one for the squad, which included a recommendation to buy Breece Hall. However, we gave some smash recommendations two weeks ago when the team told you to buy Sam Ehlinger, Kenneth Walker and Chris Olave along with shorting Matt Ryan. Ehlinger spiked +290% without a multiplier since then! Now, let’s see what this week holds.

Two weeks ago Dalton Kates told you to Long Olave at $13.45. This could be your last chance to get in on Olave before he joins the $20+ ranks at WR. It’s clear as day to me: Olave is the most likely ‘22 1st round rookie WR to become a superstar. (And I LOVE London.) The only WRs to do what he has in his first career six games are all superstars, including Justin Jefferson, the most expensive WR stock on Mojo at $26.63.

It doesn’t matter if it’s Taysom Hill, Jameis Winston or Andy Dalton: Olave will get open and put up stats. Trust the historical comparisons and Go Long on Olave with his Multiplier.

Ryan was my short pick two weeks ago and I am going back to the well. The market is currently predicting another $3.78 in future value, which is equivalent to about 60% of a peak Matt Ryan season.

If you agree with me that he never starts another game, you can make a lot of money if you choose to Go Short on Ryan with his giant Multiplier, which means even a modest 2% dip this year would mean a 20% return.

Waddle has had an up-and-down season thus far, but his highs and lows are almost perfectly in line with Tua Tagovailoa’s. He’s had fewer than 50 yards in two games this season, each without Tagovailoa under center, and hasn’t had less than 69 yards when they’ve each played a full game together.

In fact, Waddle has more receiving yards, first downs, and touchdowns with Tagovailoa under center this year than teammate Tyreek Hill! He is option 1A in this offense and the rate he’s producing at just 23 years old is incredible. This is still very early in Waddle’s career to buy stock and that 5x Multiplier makes it all the more juicy.

I will be telling you all to Go Short on Jones indefinitely. He is not part of the Bears’ offensive gameplan, not particularly talented, already 25 years old (that’s older than Tee Higgins, Justin Jefferson, and CeeDee Lamb) and has just two targets so far in his career.

Jones will need literally thousands of yards to return positive value, something that seems impossible at this point.

The move by the New York Jets to go out and acquire third-year running back James Robinson following Breece Hall’s season ending injury genuinely shocked me. The longevity of this trade seems questionable. But for the rest of this season I am loving the looks of James Robinson in your Mojo Portfolio.

Coming off an awful performance in Week 7, Robinson has the opportunity to break out now that he is not overshadowed by Travis Etienne. This Jets offense was relying on the beast that is Breece Hall and now there are some big shoes to fill.

Do I think James Robinson will waltz into New York Jersey and become the perfect replica of Breece Hall? Absolutely not. But I do think Jacksonville was not utilizing him in a way that showed how talented he actually is and Going Long on him with his 5x Multiplier should put you in the green after this weekend.

Patrick Mahomes has a new weapon in Kansas City after the Chiefs traded for Kadarius Toney. Smith-Schuster and Toney are two completely different receivers and will each hold their own role in this offense and I do not think JuJu’s share price is going to completely tank…but the 10x Short Multiplier makes this transaction entirely worth it when there will be less touches to go around.

We have not yet seen exactly what Kadarius Toney is capable of… literally I mean, he has never scored a touchdown.

Warning, this is a very high compliment to dish out, but I see some Tyreek Hill in the way Toney moves. If anyone can unlock Toney’s potential it’s Patrick Mahomes and Andy Reid. The injury concern is real, but the ceiling for him is extremely high in Kansas City and we are going to be seeing the best of Kadarius Toney… which means less of the other receivers in KC.

Sorry JuJu, but it is time to Go Short.

While Tua has had ups and downs this season, it’s no doubt that he has made a significant step up in his level of play. Currently sitting at the 24th highest priced QB, Tua has plenty of room to grow.

With arguably the best weapons in the NFL in Tyreek Hill & Jaylen Waddle, and at only 24 years old, I think Tua is my favorite cheap QB Long. Tua’s 2020 draft class peers Joe Burrow and Justin Herbert both sit above $82, well over double Tua’s current price. I believe that Tua will close that gap, as he continues to be severely underpriced.

While it was fun, Zappe hour is coming to a close in New England, and quickly. Zappe’s price shot up another 23% this week as he made an appearance on Monday Night Football. However, I believe now is the time to go Short on Zappe.

Capitalize off the surging price and get a soft entry point to Short him. Bill Belichick has already gone back to Mac Jones and Zappe’s stock is likely to plummet if Jones plays well.

Travis Etienne has been killing it for the Jags as of late, so much so that James Robinson was traded to the Jets after Breece Hall’s injury. Etienne is a young running back who will only be getting better, which is why going long on him now is the move.

This week, he ran for 114 yards vs. the Giants, the most he’s ran in one game this whole season, after rumbling for 32, 71, and 86 yards, respectively these past three weeks. Yards are going up, stock is going up, it only makes sense to buy.

Crazy enough, I was selling Kadarius Toney first. But he is now a Kansas City Chief, so you can imagine how much of Valdes-Scantling’s field time and targets are about to drop off.

His numbers were already quite low when Juju Smith-Schuster joined the offense, so with yet another wide receiver in the mix, it’s time to Go Short. Even with Toney’s injury history, the Chiefs will prioritize him as the new guy on the field, leaving MVS in the dust.

Prices are current as of 10/28/22 at 10:00 AM EST
All trades you make are with Mojo, which sets the lines as the “house”. Recommendations are for entertainment purposes only. Please use your own judgment and data to make trades. 21+. Must be in NJ to trade. Gambling Problem? 1-800-GAMBLER
About the Author: