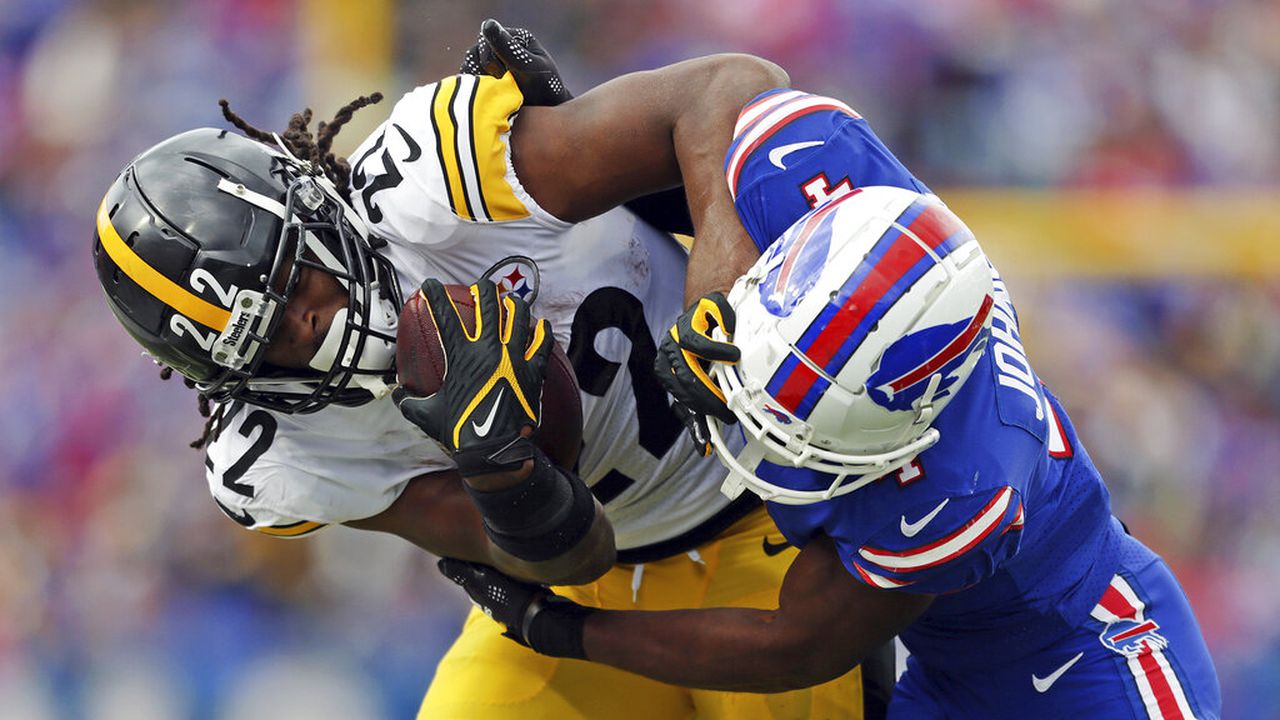 When you look up “compiler” in the dictionary, you’ll find a picture of Najee Harris. Despite ranking near the bottom of the league multiple efficiency metrics in 2021, Harris managed to plod his way to almost 1,700 scrimmage yards on the back of the highest opportunity share in the NFL.

As a rookie, Harris banked $0.159 Mojo Value per game, but that has plummeted to only $.088 Mojo Value per game so far this season. To be fair, I do expect improvement in that regard, but not to the level that he was as a rookie. Part of that is that his plodding ways seem to have caught up to him with his opportunity share dropping from highest in the NFL to 12th this season.

Even with his career-average Mojo Value per game being buoyed by rookie production that he may never hit again in his career, Harris would need 67 more games to reach his future value- which would take him until he is 28 years old. RBs are notoriously risky with short shelf lifes and lots of injuries. I would happily Go Short with his Multiplier.

When Smith-Schuster signed with the Chiefs, people were hoping he could recapture some of the production he had earlier in his career. The Chiefs were undoubtedly one of them but they had their trepidations as shown by Smith-Schuster’s 1-year contract worth only around $3M guaranteed.

Through five games, Smith-Schuster has an iffy role with only a 20% target share. He’s converted his 35 targets into only 51 receiving yards per game (a 17 game pace of less than 900 yards).

On the season, Smith-Schuster currently only has $0.072 Mojo Value per game- only 70% of his full career Mojo Value per game of $0.102. However, even if we use his full career average, he would need to play 92 more games in his career to hit his future value- or almost five and half more years until his age 30 season. If we use his Kansas City production to calculate this, it would take seven and half more years and would result in him needing to chug along at his mediocre pace until his age 32 season. Go Short with this Multiplier to make this investment count.

Noah Fant has been very disappointing to start the season with only 3.2 targets per game and 21 receiving yards per game, but the market has not responded appropriately at all. He hasn’t fallen behind Will Dissly in routes yet, but he is only running a route on 52% of the Seahawks’ dropbacks. Despite this, he is still 7th in future value on Mojo behind TJ Hockenson. The market will eventually adjust to lower expectations around Fant. If you agree, I would definitely add his Short Multiplier.

Chase’s start to his sophomore season has not lived up to the lofty standards that he set during his rookie season with “only” 69 receiving yards per game.

Chase, a big play machine, can easily turn this around and is a great investment on Mojo, especially with a free 10x Long Multiplier, which could turn a 2%-3% return into a 20%-30% return when he does eventually cash in on his volume plus ability.

The Atlanta Falcons are currently “outkicking their coverage” as an NFL team sitting at 2-3 with a point differential of only minus four through five weeks. There are multiple factors to this, but I would not give a ton of credit to Marcus Mariota.

Among quarterbacks who have played five games, Mariota ranks 3rd last in passing yards. He’s been relatively efficient when passing so far this year with 7.5 yards per attempt and a middling 0.097 EPA/play, but we can derive a lot of signal from his volume so far. The Falcons’ desire for Mariota not to throw tells us what we need to about what they think about him

Sooner or later, the Falcons will want to get Ridder some game action, and when they do, his price will jump as we’ve seen it jump for other rookie QBs who have been thrust into action such as Kenny Pickett, Bailey Zappe, and Skylar Thompson. Just yesterday, Sam Howell’s price spiked after a poor Thursday Night performance by Carson Wentz.

Out of sight, out of mind. Prescott’s absence as a result of his thumb injury could be ending in the next couple of weeks and now is the perfect time to Go Long. Prescott is down 8.4% since the beginning of the season and currently sits with a Share Price of $62.86 with $26.11 in future value.

Prescott’s $0.408 Mojo value per game ranks 9th amongst active QBs and his $0.482 Mojo value per game since 2019 would rank in the top five. Despite this history of production and Prescott being only 29 years old, his future value has fallen to a point that makes him a very easy buy.

Prescott only needs 64 more career average games to reach his future value, which would only take him until his age-32 season. If we’re being aggressive, he could reach his future value in 52 games if he produces to his 2019-2021 levels. Right now, Prescott is clearly mispriced and when he returns his market will rebound, Go Long with his Multiplier to see more significant returns faster.

My stance on these four rookie WRs has not changed from the beginning of the season. I really liked all of them as prospects as a result of their college production. You can read more in my previous articles which are linked above, but I would definitely invest in the upside.

Prices are current as of 10/13/22 at 2:10 pm EST
Akash Patel is a contributing writer on Mojo. All trades you make are with Mojo, which sets the lines as the “house”. Recommendations are for entertainment purposes only. Please use your own judgment and data to make trades. 21+. Must be in NJ to trade. Gambling Problem? 1-800-GAMBLER
About the Author: