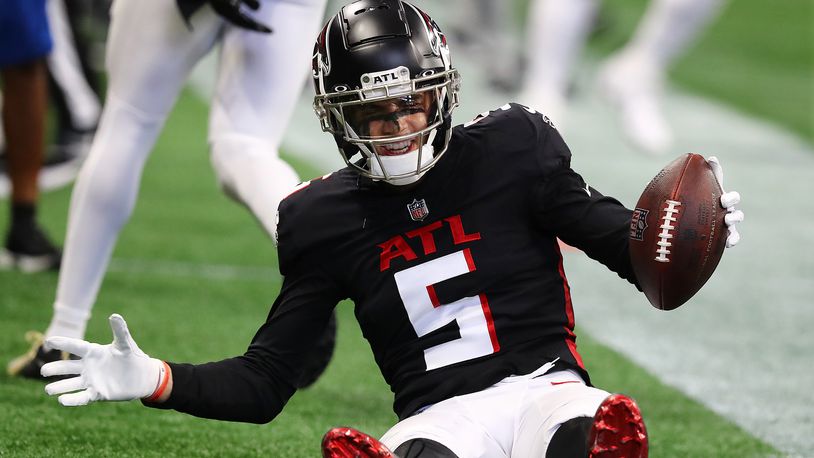 It’s hard to find a cooler name in football than Drake London. It’s also hard to find a rookie wide receiver who has more long-term potential than the former Trojan. London was the first offensive skill player to come off the board in the 2022 NFL Draft, as the Falcons selected him eighth overall. In his final season at USC – playing in eight games – London reeled in 88 catches for 1,084 yards and seven touchdowns. Impressively, he racked up at least 130 receiving yards in six of those eight games. In other words, he was simply dominant, and the Falcons’ early selection of him in the 2022 NFL Draft was absolutely warranted.

At 6-foot-5, 210-pounds, London profiles as a big-bodied wideout who knows how to use his size to his advantage. His route-running abilities are more than acceptable, his hands don’t raise many questions, and there’s little stopping him from becoming an above-average threat on the outside. To start his NFL career (seven games), he’s caught 26 of his 44 targets for 315 receiving yards and two touchdowns. According to PFF, he’s been playing primarily on the outside (as expected) while seeing plenty of short, intermediate, and deep targets. The more experience he garners, the more dangerous he’ll become on the field. It’s worth noting that Arthur Smith’s reluctance to draw up more passing plays has put a cap on London’s ceiling early on.

London's share price is depressed by the fact that the Falcons want to run at an absurd rate. In his latest performance he caught just one pass for nine yards despite trailing by double digits for most of the game.

Fortunately, this won’t be the norm long term and the short term passing volume should regress slightly closer to average.  You need to make sure you’re going Long on London. As long as he stays healthy, he could bank close to $1.50 in Mojo Value by season’s end, as he’s already accumulated $0.53 in Mojo Value. London is a star in the making; don’t be afraid to Go Long on the young wideout with his 5x Long Multiplier.

Betting on a fifth-round wide receiver isn’t for the faint of heart, but the last few years have shown us that being selected in the fifth round isn’t a death sentence. Here are most of the notable wideouts who’ve been taken in the fifth round or later over the past few years: Tyreek Hill, Marquez Valdes-Scantling, Hunter Renfrow, Darnell Mooney, and Donovan Peoples-Jones. It ultimately doesn’t matter when, or if, you were drafted – talent is talent. And Khalil Shakir could be the next late-round wide receiver to work their way into a regular role in an NFL offense. Besides, day three NFL picks are where the biggest potential gains come from.

In his senior year at Boise State, the 6-foot, 190-pound wideout had the most productive campaign of his collegiate career. Operating as their lead receiver, he caught 77 balls for 1,117 yards and seven touchdowns. And when you understand who he is as a player, these numbers make sense. Shakir has plenty of speed (4.43-second 40-yard dash), and can be dangerous when he has the ball in his hands. Moreover, he’s a smart route-runner who showcases his above-average football IQ on a regular basis. Now, it has been reported that concentration drops were an issue in college, but all in all, there really aren’t many glaring negatives to his game.

He only has six catches through four career games, but that’s not surprising considering his draft capital and the Bills’ relatively strong pass-catching corps. We might have to wait some time before he sees consistent opportunities in an NFL offense, but with his share price sitting at a lowly $2.27, he feels like one of the sneakiest buys in the Mojo Market. Based on this share price, it’s clear that the Market doesn’t view Shakir as a player who will make much of an impact at the highest level. I strongly recommend ignoring the Market and going Long on Shakir. You’ll look like a genius if the 22-year-old ends up exceeding expectations – and his chances of doing so seem fairly high.

Believe it or not, at one point in time, there were people who thought that Zamir White was going to take Josh Jacobs’ job. Isn’t the NFL offseason just a jolly of a time? Fast-forward to today and not only is Jacobs the clear-cut lead back in Las Vegas, but he’s also looked like one of the best backs in the league to start the season. Needless to say, this does not bode well for White’s short-term prospects. And his raw abilities – or lack thereof – will likely limit his ability to produce in the NFL long-term.

The Former Georgia Bulldog was efficient with his opportunities in his college days (career 5.3 yards per carry). Unfortunately, he doesn’t have much experience as a pass-catcher, or much experience with pass blocking. And the likelihood of him all of a sudden becoming a capable pass-catcher against the best of the best seems slim. This isn’t me saying that he’ll never showcase the ability to successfully catch passes in the NFL, but I feel confident in saying that that’ll never be a strength of his. If White wants to carve out a regular role in an NFL offense at any point in his career, he’ll need to demonstrate the ability to succeed as a runner while also being a useful pass protector when used on passing downs.

He is fast (4.40-second 40-yard dash), runs hard, and possesses decent vision, but I can’t help but envision him as a future goal-line, short yardage type of runner. This might seem like a bold take to some, but I don’t like his chances of ever reaching his $2.57 share price. In fact, I wouldn’t be surprised if he failed to reach $2.00. And his latest performance just further supports going Short on the young back (one carry for two yards). All in all, White is a competent runner of the football, but in this day and age, that’s just not enough – you need to be able to do more. Go Short on White's stock and profit when his market completely collapses.

10/23/22 at 11:59 pm EST
Micah Henry is a Contributing Writer on Mojo. All trades you make are with Mojo, which sets the lines as the “house”. Recommendations are for entertainment purposes only. Please use your own judgment and data to make trades. 21+. Must be in NJ to trade. Gambling Problem? 1-800-GAMBLER
About the Author: