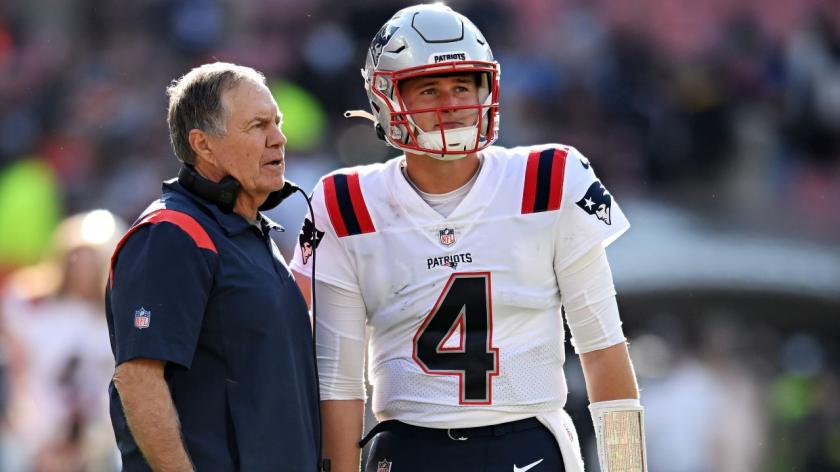 It’s officially Zappe Hour in New England. The fourth round rookie won his second consecutive game on Sunday after dicing the Browns’ secondary up for 300 yards and 2 TDs.

Cleveland stacked the box to tried to force Zappe to beat them, and he did just that, completing six different passes of more than 15 yards (and to six different receivers). He now leads the entire NFL in completion percentage of throws that traveled at least 15 yards at 66.7%!

We’re all waiting for the other shoe to drop and it might just not happen. It’s hard to find a flaw in Zappe’s game right now and it will be interesting to see how the Patriots handle him when Mac Jones returns from injury.

Case and point of why you should be investing with Multipliers. Smith-Schuster had a strong game Sunday highlighted by a few long catch-and-runs like this TD. A good game after a few poor ones sent the sixth year veteran’s stock up modestly, but his 14x Multiplier made the gains massive.

Juju has received the most targets among Chiefs’ WRs week in and week out, so positive regression was coming. It was weird to see that regression came in the form of a miraculous long TD.

I loved Dulcich coming out of the draft. He worked his way up to a central role in Chip Kelly’s offense at UCLA after coming to campus as a walk-on. He broke out during his Junior and Senior seasons commanding nearly 20% of his team’s targets averaging 19 yards per reception, both high-end numbers.

Fast forward to this week: Dulcich made his season debut after returning from injury, immediately sent Albert Okwuegbunam to the bench as a healthy scratch, caught a long TD to start the game, and dominated the Broncos’ TE snaps.

He’s a plus athlete, produced in college, and already has a legitimate role in Denver’s offense. It looked obvious to some and now Dulcich might take off.

Yet another example of how Multipliers can help boost your portfolio. Not that this type of game was expected of Drake despite him finding weeks like this each year.

Last season was down for Drake, but in 2020 he hammered the Cowboys for 160 yards and two TD one week with Arizona. In 2019 he had a two game stretch with 300 yards and six TDs. Go all the way back to 2017 with Miami and he put up nearly 200 all-purpose yards on Monday Night Football against the Patriots. Drake picks his spots.

He picked another one of those spots on Sunday with 119 yards and a TD for Baltimore. He was far and away their most effective skill player and could take over this backfield in the short term.

Mitchell Trubisky came in for the injured Kenny Pickett on Sunday and immediately had eyes for Claypool. Five of his seven targets, 76 of his 96 yards, and his lone TD came on Trubisky’s four drives.

That is genuine production, but may not sustain with Pickett potentially back on Sunday.

It was mentioned above, but Dulcich’s return relegated Okwuegbunam to the bench and tanked his stock. We should have all listened to what the Broncos were trying to tell us when Albert O played deep into the third quarter of a preseason game and when Tom Trudeau predicted his fall earlier this week.

He is fourth on Denver’s depth chart with little hope for more playing time.

Did someone say Short Multipliers? Moore has long been a darling of the analytics community and is by all accounts still a good player. The issue has been the Panthers’ QB play led by Baker Mayfield, now PJ Walker, and likely Sam Darnold soon.

He’s down 15.5% so far this season in what may be another lost year in Carolina.

It is difficult to trust running backs coming off serious lower-body injuries and Dobbins is proving why. His burst and explosiveness have not returned as he’s plodding to just 3.5 yards per carry so far this season.

Dobbins rumpled to 2.9 yards after contact per rush as a rookie but can’t get that number above 2.0 right now. As you read, Kenyan Drake ran ahead of him last week and looked far superior with the ball in his hands. Perhaps he shouldn’t have rushed back to the field.

Cryptic locker room interviews and poor body language tell us that Gordon has been benched by Denver’s coaching staff without them saying it outright.

He played just nine snaps on Monday night compared to Latavius Murray’s 27 and Mike Boone’s 21. This looks like another veteran RB slipping into obscurity.

We all thought poor play would get Wentz sent to the bench. Well, a broken finger finally finished the job and will have Wentz sidelined for four to six weeks. After that, who knows if Wentz comes back to play another down for the Commanders.

That depends on the play of Taylor Heinecke or eventually (hopefully) Sam Howell, two back-up QBs that have already seen their stocks tick up through Wentz’s poor play.