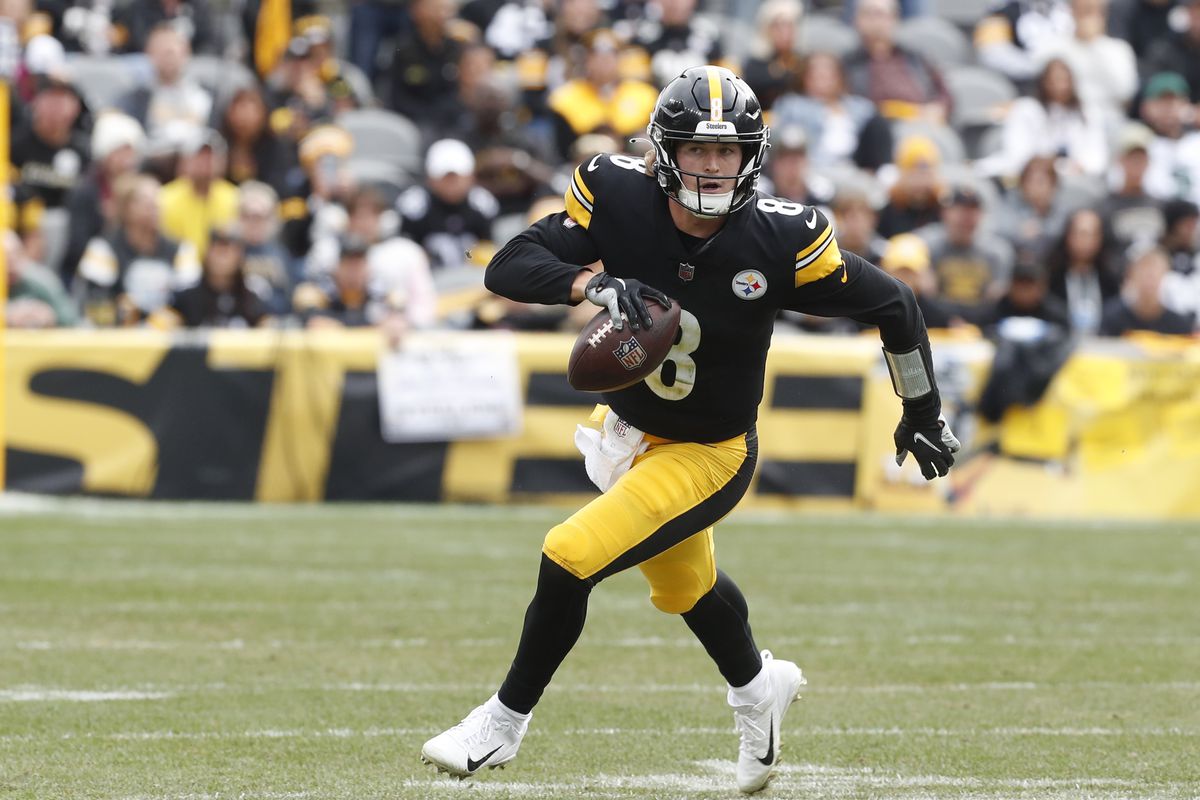 Geno Smith has had a career resurgence so far this season for the Seahawks.

Here is where he ranks so far amongst all quarterbacks:

It has only been four games this year, but his efficiency metrics last year in terms of adjusted yards per attempt are on par with what we are seeing this season.

Last year Geno was 2nd in the NFL in completed pass over expected with 6.1% right behind Joe Burrow. So that metric spanning now over multiple seasons is super promising.

This also has a lot to say about the weapons in Seattle. DK Metcalf and Tyler Lockett are one of the best wide receiver duos in the league and will continue to help elevate Smith’s talent.

Smith’s upcoming schedule is also rather easy. Three of his next five opponents are bottom 10 in Pass D DVOA allowing for continued production.

And it’s not like we haven’t seen this before, Ryan Tannehill saw a big career resurgence when he became a starter for the Titans in the 2019.

Right after Tannehill’s 2018 season and he became a free agent, his Mojo price was around $36. He now has a share price of $59.53 seeing a massive gain in expectations.

Right now Geno’s future Mojo Value is expecting him to start 21 more games with an average per game expectation.

He is only signed til the end of this year, but all indications if he continues to play at this level is he will be extended. The main thing being that if the Seahawks continue to play well they are moving themselves further away from a top pick in next years draft to select a young potential franchise QB to overtake Smith.

I’m buying that Smith can have a career resurgence and has earned himself a starting job somewhere next season.

Pollard is actually a great running back and he will continue to produce given his opportunities right now.

The biggest issue is for a running back already 25 years old and currently in a backup role, 63.8% of his share price is based on future Mojo Value.

We've never seen Pollard at any level - either in college or in the NFL - prove that he can be a workhorse for a sustained period of time. This matters as he is entering free agency next year.

He will likely get an opportunity to be a starter next year, but similar to somebody like Tevin Coleman or Lamar Miller who was great in a limited/backup role early on in his career, was unable to make that leap with a new team as the starter.

Unless something happens to Zeke and Pollard gets the opportunity to be the starter with the Cowboys soon, it’s just unlikely that Pollard hits this number in his career.

Jet fan bias aside, Wilson’s season debut was encouraging. He fought through a poor first half to lead the Jets on consecutive touchdown drives in the final 10 minutes of play to beat the Steelers in Pittsburgh.

He was the Wilson we saw last year at first: nervous against the blitz, sloppy in his progressions, inaccurate, and inconsistent with his footwork in the pocket. The low point was a disastrous interception right before half. The Jets were in field goal range facing 3rd and long before Wilson heaved an ill-advised pass to no one at all.

Then, the fourth quarter happened and he was a completely new player: decisive, clutch, and accurate. He went 10/12 with 133 yards, six first downs (four on third or fourth down), and almost single-handedly won the Jets this game.

Those flashes are enough to keep me buying in and the price is still mostly subdued. The up and down nature of Wilson’s game (and career) have tempered the market’s expectations. So much so that his heroics only produced a 4.8% bump last week.

Wilson and the Jets are matched up with a Dolphins defense that is bottom five in DVOA and have allowed over 1,300 yards over their last three games. Four quarters of strong play will send Wilson’s stock parabolic. Definitely keep an eye out for his Multipliers.

Public perception said that Edmonds, who’s always been a change-of-pace back, would take the starting job in Miami. Through four games, he has only received 28 carries while being out-snapped 134 to 111 by Raheem Mostert. Edmonds still seems to be a change-of-pace back.

That being said, the market is still expecting him to produce at a rate similar to a lead back. More than half of his share price is expected value, $4.75, while he’s banked just $1.08 in each of his first four seasons in a similar role that he has right now. That is likely to come down once everyone realizes he is not and will not be the bell-cow in Miami.

This is a story that is going to tug on all of our heartstrings. Realistically, Brian Robinson was on pace to be the Washington Commanders top back ahead of this season but, as we know, this was unfortunately put to a halt after a carjacking incident where Robinson was shot twice.

The most important thing is that he survived the attack and is okay but it is remarkable the amount of effort that he put into rehabbing his injuries in order to make his NFL debut. As of October 5th his hard work has begun to pay off as he was cleared to start practicing with his team.

A return for Week 5 is still uncertain, but we have seen the talent that Robinson is able to produce, and now we are witnessing the heart and grit he has for the game. The moment he touches the field, whenever that may be, he has immediately won Comeback Player of the Year in my eyes, and this is someone I want to root for, for years to come.

Hunter Henry is a guy I was uncertain about coming into this season and he has proved to me that this was rightfully so. Now with the New England Patriots quarterback uncertainties I am even less inclined to hold onto Hunter Henry.

He is still currently the 15th highest priced NFL tight end between Austin Hooper and David Njoku and there is talk of him getting more touches this week considering Jonnu Smith has been ruled out with an ankle injury however, I am still not convinced.

It’s time to get out on Hunter Henry.

As LaQuan Jones pointed out earlier this week, Olave has more receptions and yards through four games than did Ja’Marr Chase. Whether it be Andy Dalton or Jameis Winston under center, the Saints are already comfortable chucking it up to Olave. I think Olave gets to $17+ by the end of the month, which means surpassing Robert Woods, Tyler Boyd, Christian Kirk and Jarvis Landry. Unlike some other rookies, Olave has a Free 3x Multiplier if you Go Long.

The market expects Dobbins to have the fifth most future value of all running backs in the league right now. Some of that is due to the fact that other proven RBs are getting older, Travis Etienne is not getting the usage most of us expected, and Javonte Williams just tore his ACL. Still, I will happily fade Dobbins who has yet to command more than 50% of the Ravens RB snaps. Go Short on Dobbins with his Multiplier until he’s at least under $9.

The 3-1 Giants are coming off a win against the Bears where Daniel Jones was the leading scorer. Kenny Golladay and Kadarius Toney have YET to score a touchdown for this team (nice money and draft pick spending there, I’m looking at you Dave Gettleman). Rookie tight end Daniel Bellinger might be in the cards to get targeted in the red zone more often. He completed all three of his targets last week and seems to be a reliable guy for Danny Dimes. His share price at $2.74 is nice and low to get yourself started on the Mojo train.

This is a tricky one, but Herbert only rushed for 77 yards against the Giants, who’s run defense was not the strongest last season. David Montgomery is day-to-day with his injury, and he may be returning to the field this weekend, so Khalil Herbert is the guy to sell right now. While he’s stepped up to the plate while Montgomery is out, his return will decrease Herbert’s field time. Plus, he’s only banked $1.45 of Mojo Value. I would go short on Herbert, especially with Montgomery on the fast track.

Pickett is being thrown right into the fire as an NFL starter facing Buffalo on the road this week, but I think he’s still 100% a Buy. He looked head and shoulders better than Mitch Trbuisky against the Jets, regardless of the quality of his play I think his price is bound to increase just simply due to playing time. If you look at other young QBs around the NFL, there’s only room to improve. The cheapest starting QB in his 2nd season is Justin Fields at $24.93, and he’s been a massive disappointment. Pickett is an excellent buy, with plenty of upside.

Stafford is off to a rocky start to the year, leading the NFL in INTs. He’s down over $5 in the last month, and I believe that trend is going to continue.This offense is missing a piece, Allen Robinson has been extremely disappointing, and the Rams RBs for been horrid. Stafford is being forced into a tough situation. He’s a great short candidate with a free 7.5x Multiplier.

Prices are current as of 10/06/22 at 1:30 pm EST
All trades you make are with Mojo, which sets the lines as the “house”. Recommendations are for entertainment purposes only. Please use your own judgment and data to make trades. 21+. Must be in NJ to trade. Gambling Problem? 1-800-GAMBLER
About the Author: