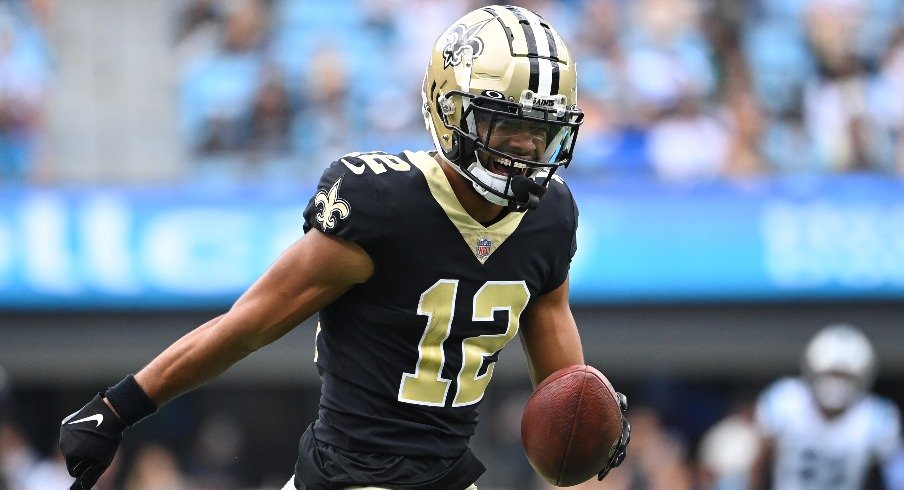 We have hit the halfway point in the NFL season. Who does the Mojo team like this week to Go Long and Go Short? As always, the best way to juice volatility is to use Multipliers when you trade. A 5% gain on Sunday for a $500 bet made on a player with 10x Long Multiplier would be worth $750, instead of $525 without the Multiplier.

McLaurin and Taylor Heinicke have some sort of bond. They connected for the game winning score last Sunday and shared an embrace after the victory.

Each emotional players, they seemed to feed off one another. Playing with a litany of QBs during his career, Heinicke has been responsible for more of McLaurin’s touchdowns than any other signal-caller.

The duo will welcome the 6-1 Vikings to DC this week and while winning six out of seven, Minnesota’s pass rating has been bad. They’ve allowed the fourth most passing yards per game and have the fifth worst PFF coverage grade as a unit.

Whether Heinicke keeps the Commanders in this one or falls far behind, McLaurin should rack up stats.

Word came down Friday that Kadarius Toney will make his Chiefs debut this Sunday night against the Titans. While not necessarily performing the same duties as Valdes-Scantling, Toney is another mouth to feed in an already crowded offense.

More importantly, MVS is both not good and never has been good. Already 28 years old and fully reliant on straight line speed, the market expects him to earn more Future Value ($5.12) than banked ($4.31). Do you think he’s better than double the 2,500 yards and 13 TD he’s already accumulated in his career?

If not, then it’s time to Go Short!

Is it risky to Go Long on Chris Olave coming off of his first poor game this season? That’s going to be a hard no from me.

I honestly wish I could make a joke about Andy Dalton being his quarterback but Dalton looks dare I say… good? This Saints offense has been electric and Olave is up 21% on the year.

He is also averaging a higher target share and is stacking up more air yards then both Ja’Marr Chase and Jaylen Waddle were at this point of their rookie seasons.

Only future superstars priced way ahead of Olave have done what he has to start his rookie season. Now Michael Thomas is out for the season, too? Please utilize that 3X Multiplier and hold him until he’s priced closer to Waddle and Chase.

Shorting Damien Harris ahead of Week 9 is a good idea on its own, but this 10x Short Multiplier makes it irresistible.

Harris has not been practicing with the team this week as he deals with an illness. I doubt he plays on Sunday, but whatever the case, I will be Going Short on a guy who is increasingly being phased out by the team that drafted him.

After the incredible performance of Likely in the Thursday night game against the Bucs, Rashod Bateman out, Mark Andrew and Gus Edwards not practicing, this is a no brainer Long opportunity.

Likely is a tight end – that is being used as a wide receiver – who can block. Only 13 of his offensive snaps came in as a traditional tight end. He caught six of his seven targets in the game vs. the Buccaneers and scored his first career touchdown. He’s already gone up 4% mid-week (so with his multiplier it would be 12%) and he hasn’t even played yet!

Zach Wilson stock has been falling lately, but he is still a Short candidate. He’s the league’s worst QB while pressured. His 19% completion rate is by far the lowest, as is his 22.0 PFF Grade. He also has the second-most interceptions and turnover-worthy plays, five and nine respectively, despite missing the first three games of the season.

Wilson’s future value on Mojo is higher than Tua Tagovailoa’s, who is currently undefeated when he finishes a game and leads the league in almost every key efficiency stat. It just isn’t looking like Wilson will be living up the hype, and the Jets are starting to fall apart all over again.

Listen, I don’t want to keep putting Tua in here every week. However, it feels like I have to at this point.

He’s by FAR my favorite buy right now, because he is still unbelievably underpriced.

He currently leads the league in Rating, QBR, ANY/A, Y/A. He gets to throw to Tyreek Hill and Jaylen Waddle. Yet the Mojo market expects less future value from him than Zach Wilson, Dak Prescott, and Trey Lance. He is still several dollars below his peak price this season despite proving he is for real and healthy. Go Long now with his Multiplier and hold until he’s priced closer to Kirk Cousins ($68).

While Goff has been playing fairly well this season, his 93 passer rating is perfectly average and right around his career mark, but the Lions have now had back to back putrid seasons with him under center.

I believe that his time as a starting QB in the NFL is coming to an end. The Lions are currently in position to pick either Bryce Young or CJ Stroud, both of whom are cheaper than Goff’s on Mojo if you’re into investing in college QBs, in April’s draft.

Goff’s share price has yet to experience a serious dip, perhaps the market assumes he’ll find a home somewhere else next year. But if both the Rams and Lions dump him in a span of three seasons, why would anyone else want him?

Prices are current as of 11/04/22
All trades you make are with Mojo, which sets the lines as the “house”. Recommendations are for entertainment purposes only. Please use your own judgment and data to make trades. 21+. Must be in NJ to trade. Gambling Problem? 1-800-GAMBLER
About the Author: