One Breakout Player from each Division 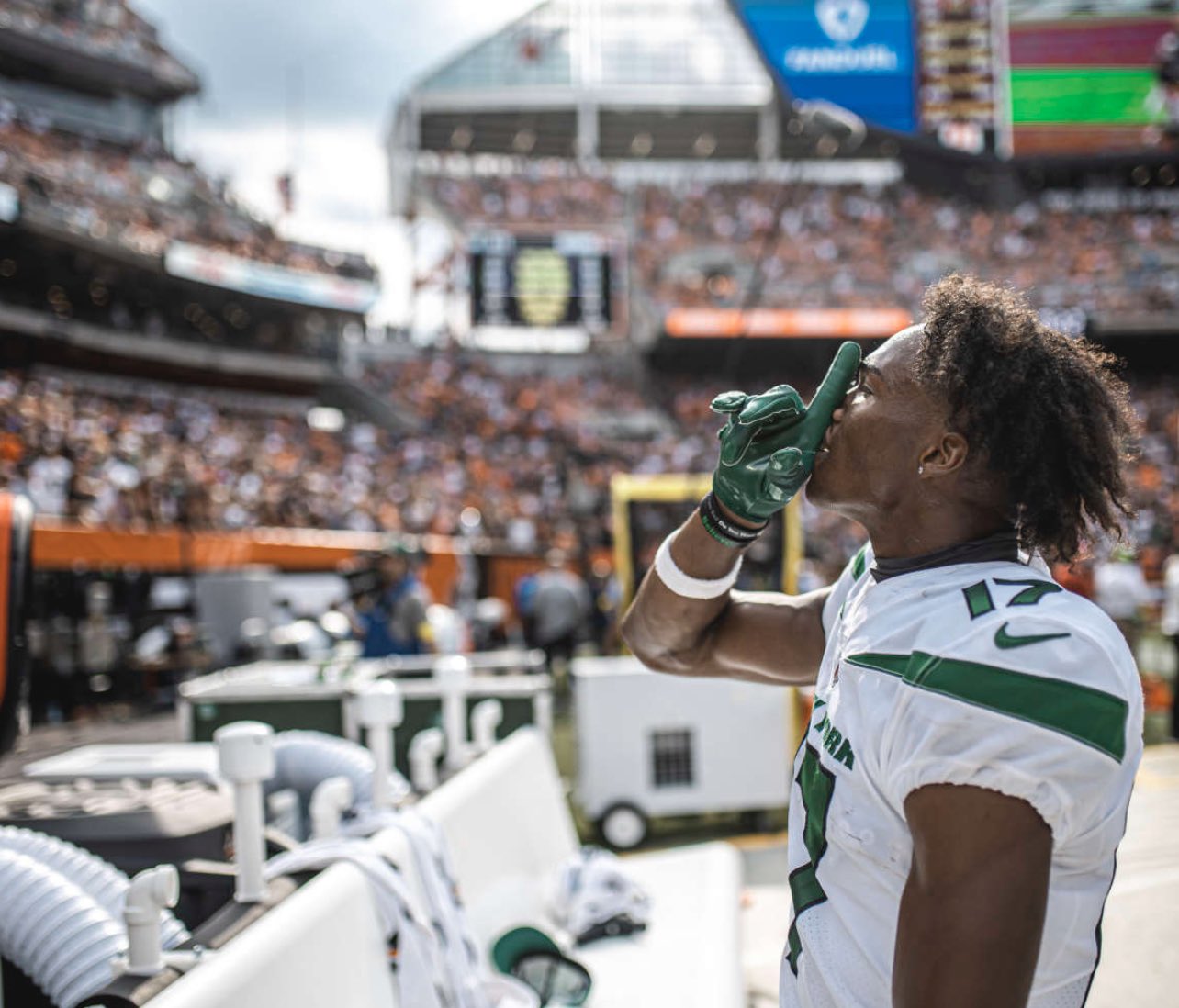 It’s hard to remember a non-quarterback rookie changing the vibe around an offense like Wilson has so far. Despite playing less than 70% of the Jets snaps, he’s had a dramatic impact.

We should nickname Wilson ‘Waffle House’ because he is always open. He leads the league in PFF’s Route Success metric, which measures the frequency at which a player can beat single-man coverage, at 54%. League average is 30% and no other player is above 50%.

Being open so often, Wilson is 10th in the league with 39 total targets and second with seven in the end-zone. Again, these high marks are with him being on the field for about two-thirds of the Jets’ plays so far.

His standout eight reception, two TD game against Cleveland in Week 2 single handedly shot his share price up 20% and his stock has risen 26th most in the market overall. There is still plenty of room for growth, too.

This division is, for lack of a better term, putrid, so finding a breakout wasn’t that easy. Alec Pierce (as predicted by Michael Salfino) looks to be mid-break out, but it was technically in the Colts’ fifth game so he was barred from this piece. (Sorry Alec.)

So, might as well go chalk and pick T-Law. The consistency still is not there, but the flashes of brilliance are more consistent than they were during his rookie season. He’s 11th in the league in adjusted yards per attempt (AY/A) and has the Jaguars playing better football overall. This once again looks like someone who could be a top-level QB.

What a whirlwind for Pickens in just a few short months as a professional. First, he drew rave reviews during camp and saw his stock trend up. Then, he was involved in the Steelers’ game plan through the first few games. THEN, he made quite possibly the most difficult catch we’ve ever seen on Thursday night football, reinvigorating his market.

Most importantly, Kenny Pickett’s debut last week signaled a changing of the guard in Pittsburgh. Pickett instantly looked more equipped to run an offense than Mitchell Trubisky, but also peppered Pickens with five targets in the second half alone. He was one of Week 4’s biggest risers and with good reason.

Most of Pickens’ stock growth so far has been due to understanding his immense talent and speculation of an increased role. Now it looks like he’s ready to fill the box score.

Seventh round rookies don’t often make an impact, especially on offense. Pacheco has bucked that trend thus far with 140 yards on 28 carries with a TD in his young career. Of course, most of that production came in a lopsided Chiefs’ victory over the Cardinals in Week 1, but producing in garbage time is better than not producing at all.

Simply put, Pacheco runs differently than the Chiefs' other backs, Clyde Edwards-Helaire and Jerrick McKinnon. He has an appealing level of violence in the open field (and in pass protection) that is earning him more playing time than most ever expected he’d get and possibly more in the future.

He’s one of just three players’ whose share price has risen at least 100% since opening day and there’s a chance this is just the beginning.

Remember like, four months ago when the book on Jalen Hurts was that he couldn’t throw? Well, his 90.7 PFF Deep Passing Grade (throws of 20 or more yards) is fourth in the league only behind Tom Brady, Aaron Rodgers, and Josh Allen and his 9.0 AY/A is second behind Tua Tagovailoa.

Hurts has asserted himself as a skilled passer and surefire MVP candidate. He is still priced around middling starting QBs such as Andy Dalton, Jared Goff, and Carson Wentz (LOL). We have seen every indication that Hurts can play this position at a high level for a long time and his price could continue to rise if he can sustain anything close to what he’s done so far.

Garrett Wilson isn’t the only rookie WR out of Ohio State who is taking the league by storm. He was just the fourth receiver EVER to record 300+ air yards in a single game, and that was just the second game of his career!

Overall, Olave leads the league in Air Yards with 699 per 33rd Team. Courtland Sutton is second with 510, 510! That is astounding.

The only caveat to Olave’s breakout so far is that he’s been significantly better at beating zone compared to man. That makes sense given his slight frame and lack of experience versus man as a member of Ohio State’s feared receiving corps. It’s not without worry, but also something he could and should improve on with reps.

Aaron Rodgers might have found his new WR1. Doubs had very little expectations as a fifth round rookie out of Nevada drafted well after the more highly touted Christian Watson, but already seems to have a good rapport with Rodgers.

A longtime staple of the Packers’ offense was the patented Rodgers back shoulder throw. Donald Driver used to catch them, then Davante Adams, and now Doubs is proving effective on that route.

Doubs has also found a home in the screen game. He is averaging the most yards per screen reception in the entire league through four weeks per 33rd Team. Deebo Samuel is second and Cooper Kupp is third, just to give a sense of who Doubs is ahead of.

A critical piece of rookie development is finding one or two things that are effective and repeatable to make the game plan seem smaller and not be overwhelmed by the intensity of an NFL playbook. Bill Walsh was famous for giving his rookies access to 5-10% of the 49ers plays. Doubs seems to be passing this test and his role (and share price) should continue to grow with more experience. Can he be the next Amon-Ra St. Brown?

Last but not least, the biggest riser on Mojo’s market thus far this season. Dortch has come on strong in his third year after being a UDFA out of Wake Forest in 2019. He bounced around the Jets’ and Panthers’ practice squads for a few years before finding a home and now role in Arizona.

He’s benefitted from both poor depth and poor health among the Cardinals’ WR corps to carve out a role early. Weeks one through three proved fruitful as Dortch saw 23 targets, caught 20 balls, and amassed 198 yards. He was able to win short, intermediate and long signaling that there could be genuine talent here.

However, his role shrunk dramatically last week with both Hollywood Brown and Rondale Moore back in the fold. I guess there’s a quota on undersized speed-demons in Arizona. Still, Dortch showed enough to prove the talent is real. The Cardinals cut Andy Isabella, paving the way for Dortch to reassert himself.

Like Pacheco, Dortch is a reminder that Mojo is all about exceeding expectations. When expectations are close to zero, that’s when you get “smash” returns!

All price movement shown is from September 7th to October 7th

Prices are current as of 10/07/22 at 3:00 PM EST
James Schiano is a full time employee of Mojo. All trades you make are with Mojo, which sets the lines as the “house”. Recommendations are for entertainment purposes only. Please use your own judgment and data to make trades. 21+. Must be in NJ to trade. Gambling Problem? 1-800-GAMBLER
About the Author: