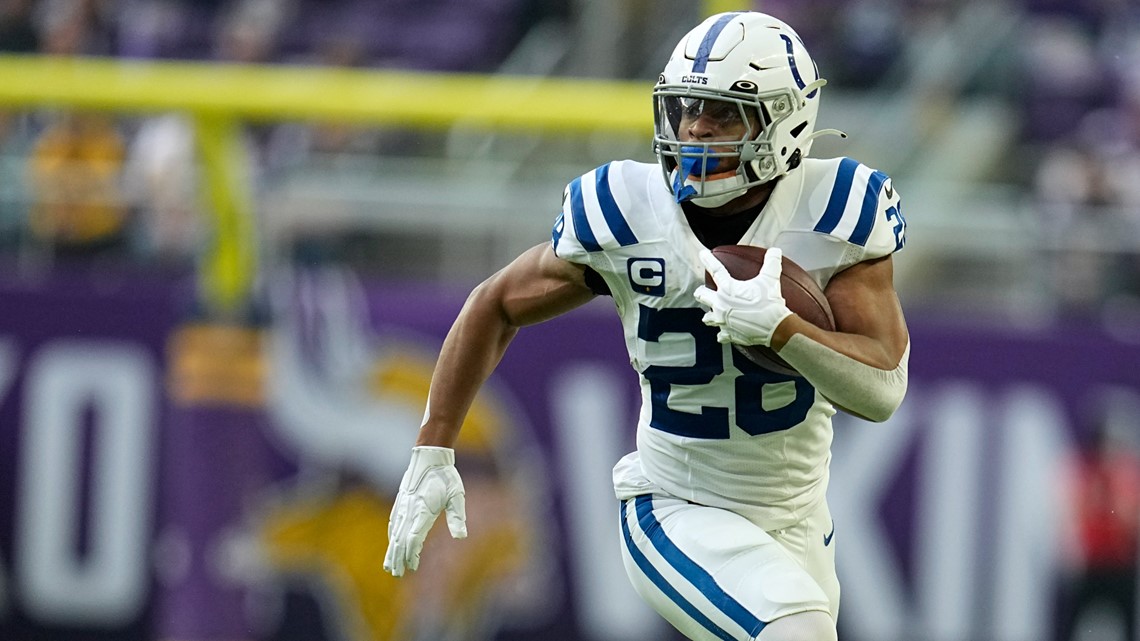 Taylor was placed on IR this week with a high ankle sprain, ending his season. He has dealt with ankle injuries for a majority of the season and ankles are very prone to re-injury, especially for running backs where a lot of cutting is required. In total Taylor will have missed 6 games this year due to various ankle ailments.

His stock is down 5% over the past week and sits at $15.80, 13th highest among RBs. What's even more alarming is that JT's share price is down 23% over the last year. Will he bounce back?

As we all know, running backs can have a very short career in the NFL due to wear and tear on their bodies. Factor in Taylor's physical running style and it's very possible that he doesn't play 17 games in a season again.

Is volume catching up to JT? It's certainly possible. His three years at Wisconsin saw him carry the rock 299, 307, and 320 times. Add in his 232, 332(!), and 192 carries over the course of his NFL career, and one can understand that a serious injury was almost inevitable. When it comes to most RB's, especially Taylor, Going Short is the move.

Goedert is expected to return to the Eagles offense this year after missing the last five games due to a shoulder injury. The injury was most likely a grade II AC joint injury based on the mechanism of injury. The Eagles are one of the more conservative organizations in the league as it pertains to player injuries, and we saw that last week when Goedert was held out even though he already sat the minimum four games for IR.

There should be absolutely no lingering concerns regarding his shoulder and he will likely play a high volume of snaps versus the Cowboys.

In the future, there is a slightly increased risk of reinjury to this shoulder, but not enough to be concerned about. Goedert has a bright future ahead of him and should be considered a top five TE in the league. Coincidentally, he has the fifth highest share price for any TE in the market.

The market expects him to earn $6.42 in Future Value more before he retires. It's important to note that his share price is up 5% over the last year, mainly due to Jalen Hurts' development as a passer.

Hurts is set to sign an extension this offseason and Goedert is already under contract for the foreseeable future. Goedert is a fantastic long-term play as he continues to develop rapport with Hurts. It would not be surprising to see him top $15 in Mojo Value before his career ends (right around Zach Ertz's share price).

Toney finally returned to the Chiefs lineup last week in their OT win against the Texans after missing the last three games with a hamstring strain. He only played five snaps and caught one ball for five yards on his only target. Kansas City was most likely easing him back into their offense and his volume should trend upwards in the coming weeks.

Speed ages really well for most wide receivers. Once Toney gets a handle on his hamstring injuries, similar to how Deebo Samuel has, look for him to produce with a future Hall of Fame quarterback and his own first round pedigree.

So, what do we do with Toney? After fizzling out with the Giants and being traded to KC, his share price is down 29% over the last year. His stock is currently 77th highest among WRs, cheaper than players like Hunter Renfrow, Marquez Valdes-Scantling, and Robbie Anderson.

While Toney may always be susceptible to soft tissue injuries, like hamstring strains, due to his elite speed (think of DeSean Jackson), he is a perfect player to Go Long on. He has Patrick Mahomes as his QB, Andy Reid as his head coach, and will continue to see more volume as long as he walks the line.

Fournette has seen his playing time decrease with the emergence of rookie RB Rachaad White, and both are seeing a near even split in volume at this time. Fournette has stayed mostly healthy this season and has only missed one game with a hip strain. While it was reported that he was dealing with a foot sprain a few weeks back, he has yet to miss any time.

His share price is mostly unchanged over the last week and is 14th highest among NFL RBs. He also has a juicy matchup this week against the spiraling Cardinals.

The bad news? Well, share price is down 9% over the last year as his athleticism has deteriorated, and the market projects just $2.41 in Future Value before he retires.

Similarly to what we advised with Taylor, RBs should be viewed as good options to Go Short on, especially if they are a few years into the league (Fournette was drafted in 2017). Factor in the uncertainty of the QB position in Tampa Bay next year, the emergence of Rachaad White, and the possibility that Fournette becomes a cap casualty next year, it’s almost certain Fournette’s best days are behind him.