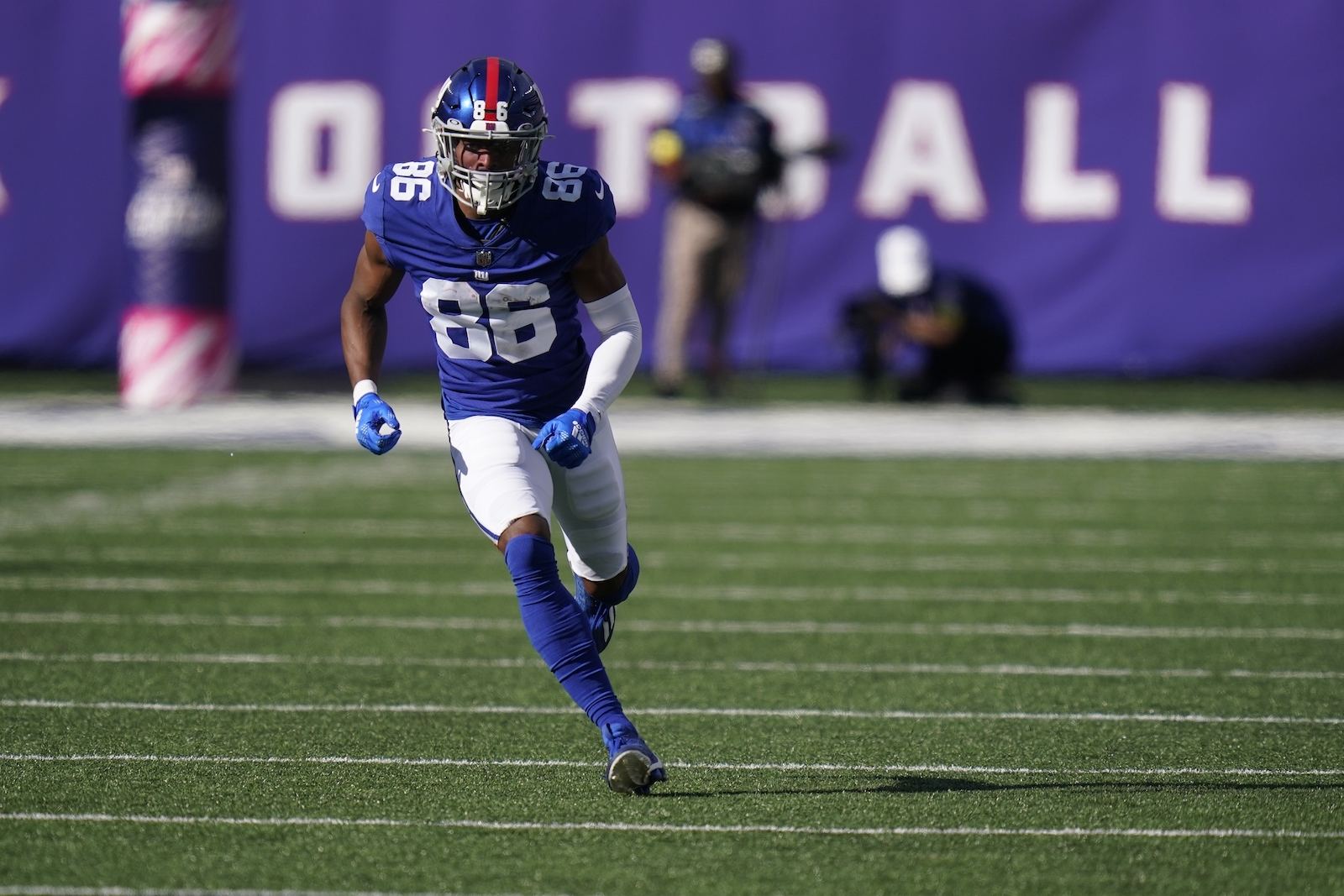 New York Giants WR Darius Slayton once seemed certain to become one of the league’s success stories out of the third day of the NFL Draft. The 2019 fifth-round draft pick had an outstanding rookie season and followed it up with a decent sophomore campaign. (The reason he is +124% all-time on Mojo is that day three draft picks usually don’t do anything in the NFL.)

Beginning in 2021, he started to fall out of favor and seemingly into the doghouse of the new head coach, Brian Daboll, who reportedly was set to cut the fourth-year player before asking him to take a pay cut. A run of injuries first put him on the roster and then into the starting lineup. He’s been the team’s most targeted receiver the past two games, with 13 targets. And on these targets, he’s compiled 183 air yards. Yet the 25-year old Slayton has a paltry $0.80 of future value. (Remember, air yards are a relatively stable statistic and generally convert to receiving yards at an expected league-average rate.)

For context, let’s look at the apple of the eye of investors in Giants receivers: Wan’Dale Robinson, a generally unsuccessful WR prototype. Robinson has a whopping $6.97 of expected future value.

I get that Robinson has second-round draft capital and was drafted by this Giants regime. But Slayton has out-targeted Robinson 13-10 the past two games in addition to the air yards disparity.

What about PFF grading? Slayton for the season is No. 30 WR, according to PFF, with a higher grade than JuJu Smith-Schuster ($17.12 at age 25 with $9.57 of future value), among many others. In receiving grade only, Slayton is 29th, significantly outpacing Robinson (who would be 55th overall and 60th receiving only if he had enough snaps to qualify).

We can quibble with PFF grading of course, but it means something. They do analyze every play. Slayton is also ahead of DeVonta Smith in receiver-only grading, as well as Deebo Samuel, Mike Evans, Chris Godwin, D.J. Moore, Jerry Jeudy and Darnell Moody. Forget about whether he actually is better. Is someone who ranks ahead of these players this year at age 25 worth just $0.80 in future value?

Remember, Mojo value primarily is determined by yards, first downs, touchdowns and big plays (40-plus yards). Let’s model Slayton considering his draft capital and his production his first two seasons when he had 98 targets, 1,451 receiving yards, 11 TDs, 8.3 yards per target. In his rookie year, other Giants WRs averaged 7.0 yards per target vs. 8.8 for him. In 2020, he was still above water at 0.5 yards more per target than all other Giants WRs. We can’t model this stat but we can do 90+ catches, 10+ TDs and 8.0+ yards per target for third-day picks like Slayton in their first two seasons. Here’s the list:

So all these comparable players adjusting for draft capital either had productive careers or were done in by factors we can’t project (injury, substance abuse). Forget about Tyreek Hill, who doesn’t belong on this list because he was only drafted this late due to character issues. So we have Colston, Robinson and Jones as most comparable. That’s an average career value of $12.78.

It’s fair to factor in that Slayton has basically lost a year of his prime due to his team losing faith in him, though that was primarily coaches and executives no longer there. While this has no bearing on future value, it docks expectations of career value significantly, about 15%. If he’s like the least productive receiver on this list (excluding those that suffered major injury or major suspension), that would amount to an expected $6.46 in career earnings, or $3.09 in future earnings, about four times what is in his current price.

Slayton's multiplier is 5X for long (long is when you expect a player to out-perform his market price). Of course, if you’re wrong, and he loses value, you lose that amount times the same multiplier.

Slayton is a very unusual player as someone who burst onto the scene and then basically did very little for over one full season’s worth of games. But he owns that sterling debut and it seems to be completely discounted now by the Mojo market. His performance for the year, according to PFF grading, and over the most recent sample of games are also being ignored. Is that a mistake? Probably so.

Prices are current as of 11/11/22 at 1:00 PM EST
Michael Salfino is a Contributing Writer at Mojo. All trades you make are with Mojo, which sets the lines as the “house”. Recommendations are for entertainment purposes only. Please use your own judgment and data to make trades. 21+. Must be in NJ to trade. Gambling Problem? 1-800-GAMBLER
About the Author: