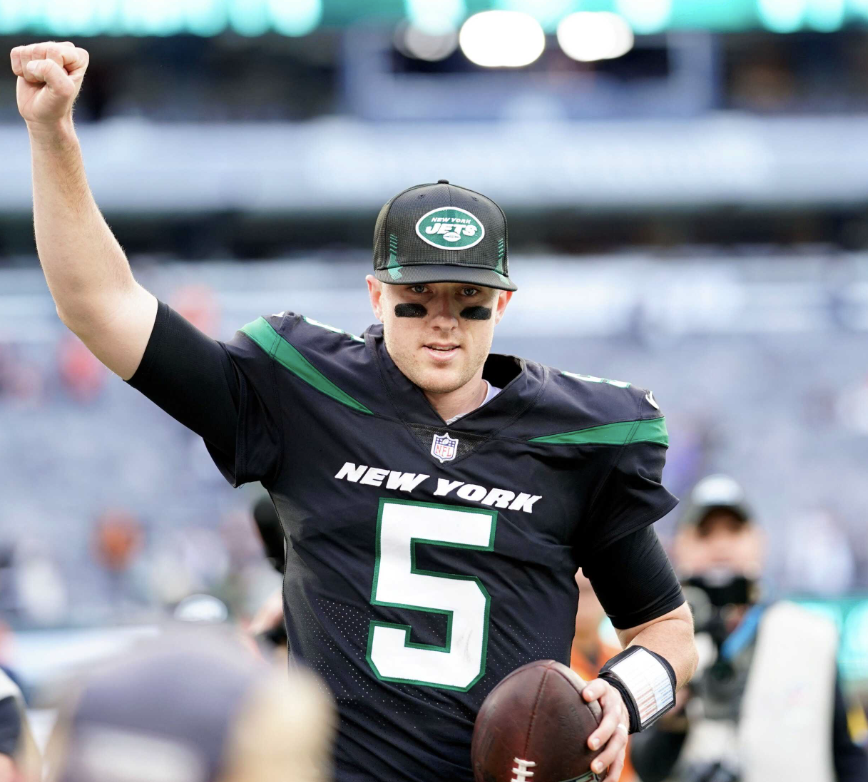 Mike White’s stock price is too low. Way too low.

He may have already had signature significance given that we don’t measure a sample size by just its volume but also its weight. The maestro behind the greatest out-of-nowhere QB success story in NFL history has seen enough, for example. Plus White’s positioned to be a starting QB going forward regardless of what the Jets decide to do with Zach Wilson.

Yes, his price has doubled recently to $3.94 (with $2.18 of Future Value). But he’s trading just fractionally above Cooper Rush who has no path to playing time (sans injury), is nearly two years older, and is viewed as a backup at best given he just drove the bus for the Cowboys while White is driving it for the Jets. (Rush, like White an unrestricted free agent after this season, has $1.74 of future value.)

Remember, expected future playing time is everything for a relatively inexperienced quarterback when it comes to Mojo value.

Furthermore, analytics darling Sam Howell, also a fifth-round pick but five years younger, has $4.65 of Future Value. That is also his share price since he’s yet to appear in a regular season game.

(I would argue that their respective ages do not matter as White is certainly young enough to project a five-year window, about the outer bound for a third-day QB draft pick, especially one like Howell who has never taken a snap.)

White is in his age 27 season, a baby for a QB, especially a pocket passer who doesn’t rely on athleticism.

Of those players, six have started at least 75 games, my somewhat arbitrary cut off for making it. (Rich Gannon was drafted in the last century but won an MVP in this one. So maybe make it 13 of 61, 21.3%.) Conservatively, White right now, back of the napkin, has at least a 21.3% of just massive returns related to playing time.

But he’s not just starting games but dominating them.

While 16 of these 200 third-day picks have had multiple games of 300 yards and three TDs at any point in their careers, White has done it in just four career starts and was on pace to do it a third time before leaving his second career start after the first quarter due to injury.

The only other QBs this century to have this level of success in their first 10 starts as a third-day pick even once: Marc Bulger, A.J. Feeley, Derek Anderson (who did make a Pro Bowl), Jon Skelton, Matt Flynn, Dak Prescott and Matt Barkley. Now we have about a one in three chance that White ends up starting 75 career games.

What if we forget about draft capital and just pick the QBs who have had multiple games of 300+ passing yards and three-plus TD passes in their first four career starts.

One active player did that: Patrick Mahomes. If we lower the bar to just 300+ and multiple TD passes, Joe Burrow also did that inside of four career starts. One player in all of NFL history had more games than White hitting the 300-yard, three-passing-TD mark in his first four starts, Hall of Famer Kurt Warner (three, which again, White was on pace to match if he plays the whole game in his second career start at Indianapolis.)

Speaking of Warner, his rookie year offensive coordinator and subsequent head coach Mike Martz (who in I must note ultimately benched Warner) said: “This feels to me, a little bit, like the Kurt Warner story. When Kurt came in, caught fire and just ignited the whole team.”

Martz later told ESPN Radio’s Bart & Hahn “It’s not a stretch, watching (White). That’s a real QB. The comparison (with Warner) is how quick the ball comes out and how accurate it is. Just watching him in the last game, I was amazed by how sharp everything was and how quickly he saw everything. His footwork is really good. I want to keep watching him. That’s not a fluke. He handles the blitz well. It’s not too big for him and has the physical abilities — a much stronger arm than I thought he had. You want anticipation and the ball out before (the WR) even comes out of his break. He did that. And that’s what you have to do to be successful in this league.You can’t go in and have that kind of success and be a fluke.”

For the record, Martz was a fan of Zach Wilson: "I think when the dust settles, he's going to be an elite player in this league.”

Former Jet and current ESPN analyst Damien Woody said on “Get Up” on Thursday that the team has answered the question of whether White will be the QB for the rest of 2022. “All you have to do is watch (their) reaction (to White) during the game and post-game.”

No matter what the Jets do with Wilson, White is going to determine his own fate as an NFL starter not just in 2022 but beyond. He’s an unrestricted free agent in 2023.

An interesting question for investment purposes is whether White now has a higher probability of starting 75+ career games than Zach Wilson, a second-overall draft pick.

Every highly drafted QB has about a 50% chance of that. How high can Wilson now be off of his second-year benching, after 20 NFL starts? I’d say no higher than 25%. It’s hard to say that White’s chance is less than 33%. Things have gone sideways for Wilson. It’s probably even lower than 25%.

Yet Wilson is trading still at $16.56 in future value versus just $2.18 for White. That is just a crazy gap given what we’ve seen from the two players, irrespective of their ages. (White again is certainly young enough to get 75 career starts.)

Ironically, White’s FA status may give Wilson another chance. White is probably going to cost more than Wilson in 2023 and maybe a whole helluva lot more. But White’s free agent status guarantees him a starting job somewhere if Martz proves prophetic that his starting career to date, on balance, must be real.

If there was ever a time to bet on White, it would be right now. He is set to face the Vikings on Sunday. While their record would indicate they are a good team, their defense (23rd in DVOA) is far from impenetrable. Then comes the Bills in a game where the Jets could legitimately vault themselves into striking distance for the AFC East crown.

Two good games from White will mean he is the unquestioned starter for the Jets and that certainty of role will cause his Future Value and share price to shoot up. Even if they market sees him catch up to Howell in Future Value ($2.18 vs, $4.65), a $1k bet on White would be worth more than $7k with his Multiplier.

Prices are current as of 12/1/2022 at 3:30 PM EST
Michael Salfino is a Contributing Writer at Mojo. All trades you make are with Mojo, which sets the lines as the “house”. Recommendations are for entertainment purposes only. Please use your own judgment and data to make trades. 21+. Must be in NJ to trade. Gambling Problem? 1-800-GAMBLER
About the Author: