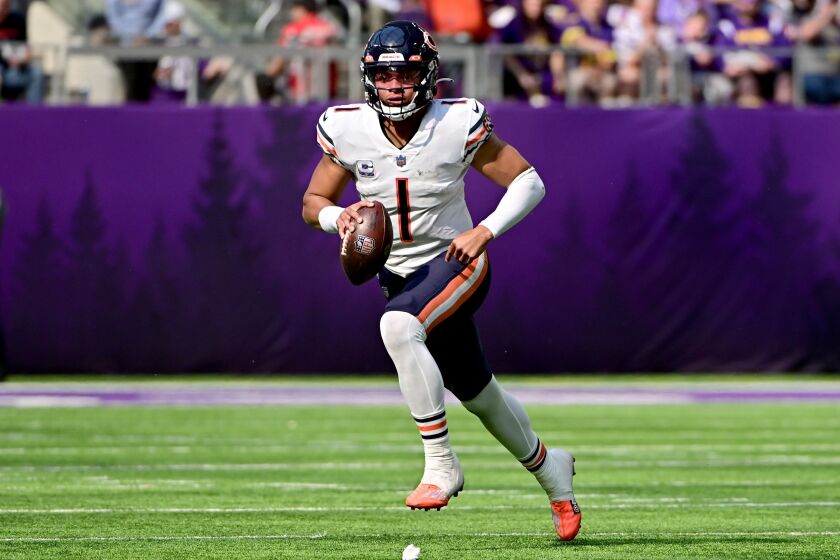 The player with the best chance to spike tonight is Sam Howell. Investing in backup QBs has been a dominant strategy so far this season, with numerous young QBs spiking due to surprise opportunity. What makes Howell so attractive is that, unlike other backup QBs, he's actually down 25% over the last month. Also, Ron Rivera is already turning on Carson Wentz. At $4.27, the upside far exceeds the downside. If he gets into the game, I would expect a minimum 10% spike, if not closer to 20-30%. Howell doesn't even need to step onto the field to go up in value tonight. If the Commanders fall to 1-5, the calls for him to get his shot will become louder, and the market could push his price up on speculation. Don't wait on Howell.

Let's do some quick math. Wentz averages $5.54 Banked Mojo Value per season. The market expects $11.55 in Future Mojo Value. Do you think from this point forward Wentz has over two full seasons of peak performance left in his career? I do not, especially since I don't think it's a given that he lasts the full season as starter this year. Who is going to give him the keys to the franchise next year if he fails on three teams over three years?

He may not lose his job tonight, which we need to see the crash (absent injury), but with his 3x Short Multiplier a 4% drop would mean a 12% return overnight.

There is no young QB on Mojo who is more affordable than Fields with this type of upside. Mac Jones is nearly twice as expensive. The hate hath gone too far on Fields, who is priced below Teddy Bridgewater and just above Mitchell Trubisky currently. Consider Sam Darnold is priced just below $20; which is probably worst case for Fields.

Fields isn't the style of QB we are used to seeing succeed, but as Dalton Kates points out in the latest episode of Risers & Fallers (11:50 mark), his efficiency hasn't been an issue as much as his lack of volume, which may be a scheme choice rather than Fields' fault. He has no games with over 22 passing attempts, which is evidence that the coaching staff may simply be playing towards the team's strengths and away from their weaknesses (terrible O-Line, poor pass catchers outside of Darnell Mooney).

The bet is on Fields long-term and that the Bears will add reinforcements to help support him more next season. However, given his cheap price, I don't mind making that investment today with the multiplier.

Prices are current as of 10/13/2022 2:00 pm EST
Thomas Trudeau is a full time employee of Mojo. All trades you make are with Mojo, which sets the lines as the “house”. Recommendations are for entertainment purposes only. Please use your own judgment and data to make trades. 21+. Must be in NJ to trade. Gambling Problem? 1-800-GAMBLER
About the Author:

Thomas Trudeau
Tom runs content for Mojo, where he is proud to be employee No. 1. He's had a lengthy career in sports, including time with ESPN, the NBA and MLB
You have successfully submitted
Oops! Something went wrong while submitting the form.
Please Enter A Valid 10-Digit Phone Number
By clicking ‘submit’ you agree to the terms of use and privacy policy. Phone numbers may be used for marketing purposes. Message and data rates may apply. Text 'Stop' to opt out.