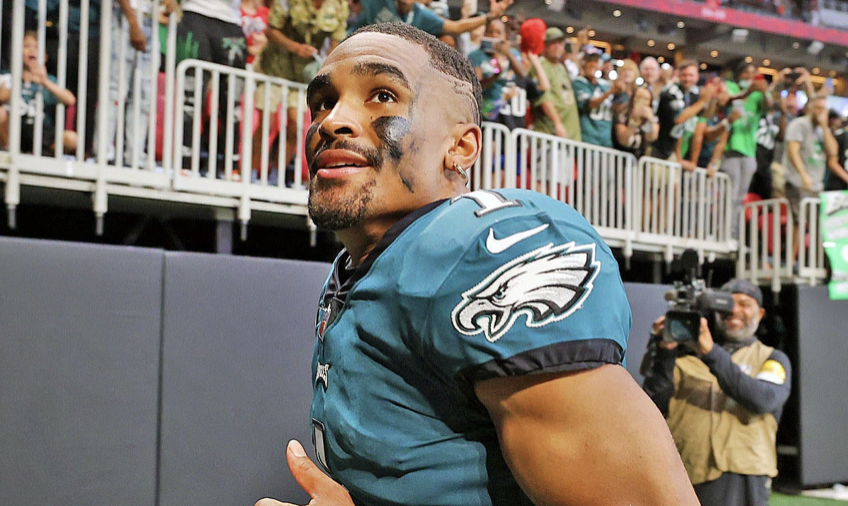 Jalen Hurts ($47.29) is up 46% in the last month, since the start of the season. But it's not too late — he still has room to grow to the Lamar Jackson level of about $70 per share, a rise of about 50% from his current price. And the path to him realizing that gain in the near term is straightforward: He wins the MVP.

There’s nothing tangible about winning the MVP that impacts player value. There’s no "MVP bonus," technically. But winning the award at this stage of his career would cement him as a franchise quarterback on the Eagles, a smart organization with elite skill talent. That would take him out of the “is he going to be a long-term answer” box and give him a guaranteed five-year window given the expected franchise money he would thus command. It’s the imprimatur of winning the Award that virtually guarantees he keeps his starting job for the foreseeable future, thus dramatically increasing his expected future value. And an MVP-worthy season also obviously boosts his Banked Mojo Value, because of the numbers he’s produced.

One of the reasons Hurts is already a top-three favorite for the award is that the Eagles are expected to win a lot of games. They have the best odds currently to be the NFC’s top conference seed and also are the favorite to emerge from the conference as the NFC’s Super Bowl representative. Members of the Super Bowl winning team each get a five-times bonus for that one game; and obviously the QB on the winning team is expected to generate the most stat value in the game.

The expectations all summer were that if the Eagles were to have this kind of team success, Hurts would be riding the bus. He wouldn’t be driving it. The Eagles were expected to be a run-dominant team, with Hurts being a big part of this. Instead, they are the No. 1 yardage team whose trademark thus far is explosive passing plays.

Hurts is running – on pace for 947 rushing yards and 17 rushing TDs. But what’s completely unexpected is that he’s averaging over 300 yards passing per game with the best yards per attempt and yards per completion in football. He’s completing 67% of his passes, by far the highest mark of his career. The Eagles are not playing around Hurts. They’re playing through him. Combine that mindset with the skill-player support of an All-Pro-level receiver in A.J. Brown and an emerging one in DeVonta Smith, who are playing their age 25 and 24 seasons, respectively, and you see that Hurts actually is driving a Lamborghini. Additionally, TE Dallas Goedert (age 27 season) is coming off the best yards per target season of any tight end in NFL history (min. 75 targets).

Hurts also plays behind what’s widely considered a top if not THE top offensive line in football. He merely needs to be good in order to post the great numbers that drive Mojo prices.

Prices are current as of 09/28/22 at 10 pm EST
Michael Salfino is a Contributing Writer at Mojo. All trades you make are with Mojo, which sets the lines as the “house”. Recommendations are for entertainment purposes only. Please use your own judgment and data to make trades. 21+. Must be in NJ to trade. Gambling Problem? 1-800-GAMBLER
About the Author: