Why Julio Jones Can Have a Big Bounce Back Year 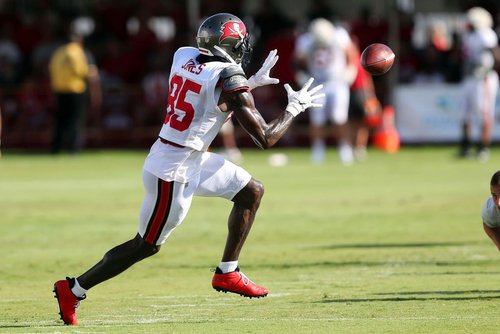 Julio Jones has dealt with hamstring issues dating back to 2020 (14 missed games).

Will that suddenly be a non-issue this season? I don’t know.

There’s a chance that these issues linger and he misses time, but I’m not a doctor.

But we also have to consider the outcomes in which Julio Jones does stay healthy.

Has Julio Actually Been Bad for the Last Two Years?

It seems the football community has written him off after a couple of unproductive, injury-ridden seasons.

If we dive deeper the metrics show a wide receiver who is still elite - or close to it - from an efficiency standpoint.

2020 was the start of Julio Jones’s perceived decline. He only played nine games that season.

Julio Jones was also fourth in the league with 2.6 yards per route run.

Last year he played rather sparingly in 11 games. I’m including his postseason game to add to the sample.

In these 11 games, Jones only saw 55 targets but still had a 20.4% target per route run playing alongside AJ Brown.

Julio’s 1.84 yards per route run last year was 25th in the league - the same as Stefon Diggs.

On a per route and target basis, Julio was still efficient.

It’s clear despite injuries that Julio Jones hasn’t completely fallen off and has been good when on the field.

Julio has been historic on a per-game basis and, most importantly, has been wildly efficient! He’s in the conversation for the best wide receiver of all time up to this point in his career.

These historic wide receivers tend to play and be productive longer in the league than the average wideout.

A few Hall of Fame level players who have had great late career bouncebacks come to mind when finding career comparables for Julio Jones.

One is Brandon Marshall.

He left the Bears and signed with the Jets only to have arguably the best season of his career.

Larry Fitzgerald is another prime example, but his decline lasted for three years.

It was largely assumed that Fitzgerald’s career as an elite WR in the league was over, but the following year at age 32, he bounced back with another elite season.

Fitzgerald had a 25.2% target share and a 2.20 yards per route run that season, which was closer to his career average than the previous three years. All it took was a change of scenery with a new quarterback (Carson Palmer).

The main commonality here with these bouncebacks from these veterans was we saw a shift in talent around them before they bounced back much closer to their career averages.

On a brand new team with the Titans and a run-heavy offense, we saw the sharpest decline in efficiency.

Given a favorable situation change we can see a similar bounce back that Marshall and Fitzgerald had.

There may not be a better situation to be in than with the Bucs as a wide receiver.

The Buccaneers had 731 pass attempts as a team last year - 56 more than any other team - and do not look like they will change any time soon.

Tom Brady supported four players with over 64 receiving yards per game for different parts of the year. No other team had more than two players hit these numbers.

He also threw for a league-leading 5,316 passing yards and 43 passing touchdowns.

Two of those players are off the team and Chris Godwin is recovering from a torn ACL at the end of last season.

To replace those players the Bucs brought in Russell Gage, who hasn’t been overly impressive yet through four years in the league.

We know that players coming off an ACL injury see a decline in production their first year on the field back from the injury. Considering how late in the season that Godwin’s injury happened, it might be a stretch to assume he will produce at the same level he did last season.

As the mainstay of the group, Mike Evans is coming off a season in which he only saw 16.4% of the targets in this offense.

This is the most pass-happy offense in the NFL that now suddenly has questions surrounding their receiving core.

Enter Julio Jones who now has the best situation of his entire career in an offense that can support multiple receiving options at a high level.

A Buccaneers source told Jeff Darlington that “Julio Jones looks like the 2019 version of Julio Jones” in training camp.

While it’s certainly possible that he is about to flame out of the league, there are data points that give us optimism that he can bounce back.

And if he does bounce back, history shows us it will be closer to his career averages.

All the stars are aligning for Julio Jones this season and I’m buying the idea that he could be in for a big year.