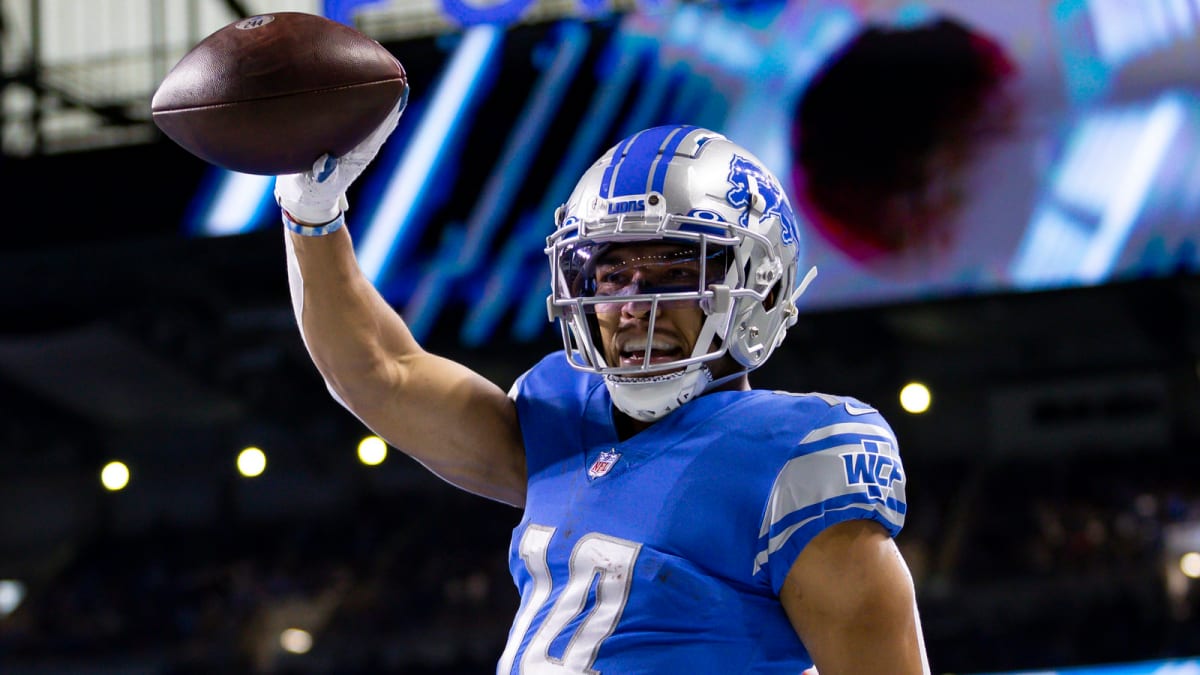 There were plenty of fun interesting tidbits we can gather from week one.

I went game-by-game and dove through all the stats in the early morning games to find out what happened and how we should react.

Allen Robinson ran 48 routes, but saw only two targets. This is extremely concerning and shows that his 2021 down season is probably the start of a trend. I’m not completely out on him just yet, but there’s a decent chance he’s going down the Kenny Golladay career path.

Darrell Henderson saw 81% of the running back carries; he looks to be the clear lead back.

Sean McVay has consistently used one running back as the workhorse in his tenure with the Rams and Henderson looks to be that guy this year.

Donovan Peoples-Jones had an elite .314 targets per route run and 36.7% target share in Week 1. Those are extremely encouraging signs as he was used in both the short (0-9 yards) and intermediate (10-19) routes.

His average depth of target of 8.5 (aDOT) was much lower than his 15.6 aDOT last year, which suggests an encouraging role change.

Before I go all-in, I want to see a few more weeks of this usage as it’s likely this is an outlier performance.

Tyreek Hill saw an elite 38.7% target share in his first game. It’s clear Tyreek’s volume isn’t going to slow down now that he is with the Dolphins. Jaylen Waddle saw only five targets in this contest, but we should see him bounce back next week. This will still likely be a 1A/1B situation with Tyreek likely leading in targets.

Devante Parker and Jakobi Meyers were the clear top two wide receivers as they ran 31 and 33 routes respectively, but it was Nelson Agholor who led the wide receivers in targets per route run with five targets on just 18 routes. This is probably going to be a frustratingly inconsistent group.

Joe Flacco attempted 59 passes. Only one of those attempts traveled 20 or more yards. Flacco checked the ball down constantly all day with 73% of those passes traveling nine yards or less.

This had an effect on Elijah Moore, who thrived on intermediate and deep routes last year, with 58% of his targets coming in those areas. Moore was the one who corralled the sole target over 20 yards.

As this offense starts to open up, Moore should bounce back, but there is slight concern that Flacco is simply going to dink and dunk.

Garrett Wilson saw eight targets in his first game while running 35 routes. He ran as the third wide receiver and was used all over the formation. This is extremely promising for Wilson and his ability to break out as a rookie.

Breece Hall getting 12 touches and seeing 45% of the snaps was about on par with what I would have expected for him in his debut. It’s clear Michael Carter will still have a role, but I fully expect Hall to continue to see his role improved.

The Steelers are running out three wide receivers on 95% of their drop backs and it’s very concentrated between Diontae Johnson, George Pickens and Chase Claypool.

We saw an interesting development with Claypool as he ran 95% of his routes in the slot and also had six carries. He has a chance to bounce back this year as the involvement early on is encouraging.

50% of Trubisky’s pass attempts traveled 0-9 yards down the field. This was right on par with what Ben Roethlisberger showed last year, so this is a bonus for someone like Pat Freirmuth. A 2nd year leap is definitely in the cards, but week to week there’s likely to be variance between guys like Pickens, Claypool and Freiermuth.

There might be a changing of the guard for the Bears’ running backs. David Montgomery had 17 carries for 26 yards while Khalil Herbert had nine carries for 45 yards.

Herbert was also more impressive with 2.22 yards after contact per attempt while Montgomery had 1.41. It’s still likely over the next couple weeks that Montgomery gets more carries than Herbert, but based on offseason chatter and Herbert outplaying Montgomery, it’s trending towards a full committee with the potential for Herbert to be the workhorse.

Jalen Hurts dropped back 42 times in Week 1. This was a massive increase in the 32.7 dropbacks he had per game last year. This offense being more pass heavy with the element for Hurts to scramble on these plays is exciting.

Devonta Smith ran the most routes on the Eagles, but only earned two targets. Smith had a .195 target per route run last year and should positively regress closer to that number this year. This was likely an outlier game. The Eagles are dropping back to pass more and Smith should run more routes, allowing him to potentially increase on his rookie season output.

AJ Brown’s 45.8% target share is otherworldly and shows that he is the alpha in this offense. While we shouldn’t expect that big of a discrepancy in target share every week, it’s extremely encouraging.

D’Andre Swift’s 98 rushing yards after contact were the most in his career so far in a game. With a top offensive line leading the way, he should have a much better year running the ball.

Amon-Ra St. Brown showed last year wasn’t a fluke as he got targeted on 33% of his routes run. He should be in for a monster year.

DJ Chark was targeted on 25% of his routes run. Chark could be a sneaky bounce back candidate this year if we continue to see this usage.

Kylen Granson saw six targets, but most importantly he ran nine more routes than Mo Alie-Cox. This is intriguing as Granson legitimately could be a very under the radar guy this year who puts up production week-to-week.

Michael Pittman dominated the target share with 28% of targets. He looks to be in line for a very big year.

The number two receiving option in this offense looks like a full blown committee between both the running backs, tight ends, and the trio of Parris Campbell, Ashton Dulin, and Alec Pierce.

This was despite the Texans leading by multiple scores. This is concerning for Dameon Pierce both in the short term and long term. He should eventually grow more into his role.

Drake London had an impressive debut with a 23% target share and 2.47 yards per route run. He could easily breakout as a rookie.

Kyle Pitts was used all over the formation, logging 25% of his snaps at each of the three positions between inline, out wide and in the slot. He saw a target on 25% of his routes, so don’t panic.

Chris Olave running 33 routes was encouraging, but he only saw three targets. I’m monitoring whether Olave can get targeted on a higher percentage of his routes.

Michael Thomas and Jarvis Landry both coming back strong was encouraging. Both ran a route on  90% or more of passing plays and saw eight targets each.

Right now they look like 1A/1B just based on usage, but Olave and Kamara could get more work.

Juwan Johnson ran a route on 94% of passing plays! This is extremely encouraging for his chances of seeing an increased role.

Zay Jones commanded nine targets and saw a target on 25% of his routes. Christian Kirk saw ten targets as both looked to be the main options. Between the two, I am more confident Kirk will maintain that volume.

Travis Etienne saw only 51% of the snaps and was out-touched 12 to six by James Robinson. This is a big hit to Etienne’s value, though was efficient with four carries with 30 yards after contact.

Robinson also looked good with 48 yards after contact on 11 rushing attempts. This is quite impressive given he’s returning from an achilles injury. It’s still probable that Etienne works into a bigger role, but we are probably looking at a split similar to what the Lions had with D’Andre Swift and Jamaal Williams last year.

Curtis Samuel got targeted on 28% of his routes and led the team with ten targets. Samuel has always been a fun player, but has dealt with injuries.

It seems there are lots of players fighting for targets in this offense with Terry McLaurin, Samuel, Jahan Dotson and Antonio Gibson all intriguing weapons.

Gibson getting a target on 35% of his routes was positive, but it all came from the backfield, as he saw zero snaps in the slot and one out wide. Ideally we want to see him utilized more in these specific roles, because when Brian Robinson comes back, his total volume will decrease unless they increase his versatility.

Dotson ran the 2nd most routes and is a clear starter in this offense, but he only had one yard per route run, which is below average.

McLaurin had a bad game with only three targets. He still is the best wide receiver on this team and should bounce back, but this is the best target competition he has had in his entire career, so expect inconsistency.

Dalton Kates is a full time employee of Mojo. All trades you make are with Mojo, which sets the lines as the “house”. Recommendations are for entertainment purposes only. Please use your own judgment and data to make trades. 21+. Must be in NJ to trade. Gambling Problem? 1-800-GAMBLER