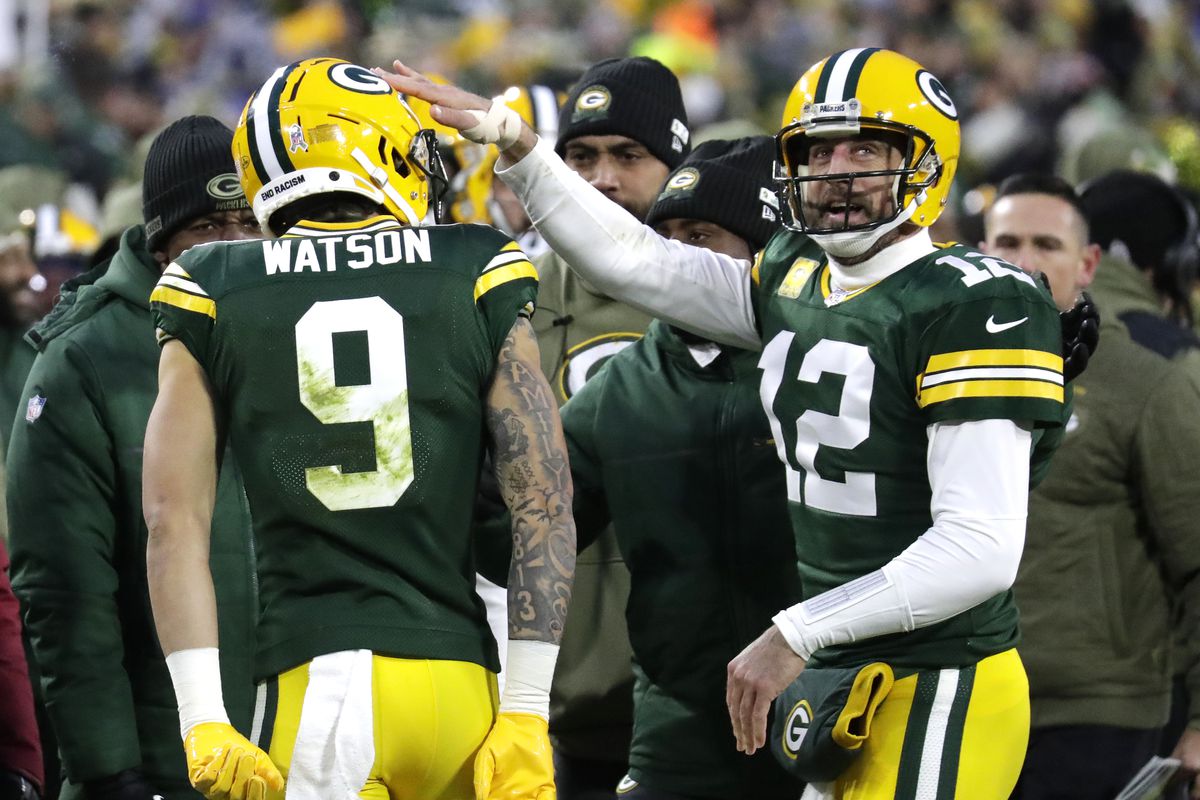 Thursday night feels like a quick turnaround for Aaron Rodgers' Packers after their marathon come-from-behind victory against the Cowboys last week. They are set to do battle with the eternally underrated and always aggravating Titans. Hopefully more exciting than many of Thursday Night's past, I'm keeping my eye on three receivers in this one: two promising and one not so much...

The breakout star of Week 10, Watson took advantage of his opportunity with Romeo Doubs out of the Packers’ lineup and looks to have proven himself as their top target. He was the key difference maker in their comeback win against the Cowboys and this could only be the beginning of his ascension.

He was relegated to a bench role after an up and down training camp that included an injury and then horrible drop during Green Bay’s Week 1 loss in Minnesota. Now out of the dog house, Rodgers found him for three touchdowns last game and targeted him on an absurd 40% of their pass attempts. That was the highest target share for a Packers WR so far this season and just 11 other WRs have achieved that high of a target share this year in any game.

There’s no reason Watson can’t be a marquee player in this league for a very long time. He is a phenomenal athlete, produced well in college (albeit not against top tier competition), and understands the game. He was the first WR drafted in the second round by GB since Davante Adams and they clearly have big plans for the rookie.

Yet, he’s still just the ninth most expensive rookie WR in the market behind players like Alec Pierce and only just ahead of Wan’Dale Robinson. Don’t let his sluggish start dissuade you from investing in someone with mountains of potential.

The Titans traded A.J. Brown this past spring and drafted Burks to more or less replace him. The vision was there with a big bodied, physical freak from the SEC, but Burks hit the IR with turf toe before he could get going.

Ryan Tannehill, Malik Willis and Tennessee’s passing attack has lagged overall, but Burks was heavily involved before going down. He was on the field for 96% of the Titans’ pass attempts, so virtually all of them.

He is 6’2”, 225 lbs, and a force to be reckoned with in the open field. The Titans spent a high draft pick on him for a reason and he still has every chance to be a superstar. His stock is down nearly 8% since being drafted and this could be the perfect time to buy the dip.

Long-term, if he can match Garrett Wilson’s current share price, a $500 Long bet tonight would be worth $1,136 with his 3x Multiplier.

There’s very little keeping Watkins in the NFL at this point. He’s been wildly underwhelming since being drafted out of Clemson. He’s amassed more than 600 yards in a season just once since 2015 and has never been close to matching the production from his first two years.

He signed with Green Bay when it seemed like they wouldn’t have many options at receiver. Suddenly, they could be flush on the outside with Watson and Doubs looking impressive. Randall Cobb is set to return from injury tonight and Doubs will be back soon: there isn't much room for Watkins.

However, he still has $2.31 in Future Value built into his share price. That’s comparable to exciting young players like Parris Campbell and Terrace Marshall while nearly triple that of Darius Slayton! Watkins may catch less than 30 passes for the rest of his career and I intend to Go Short on him with his 5x Short Multiplier.

Prices are current as of 11/17/22 at 4:30 PM EST
James Schiano is a full time employee of Mojo. All trades you make are with Mojo, which sets the lines as the “house”. Recommendations are for entertainment purposes only. Please use your own judgment and data to make trades. 21+. Must be in NJ to trade. Gambling Problem? 1-800-GAMBLER
About the Author: