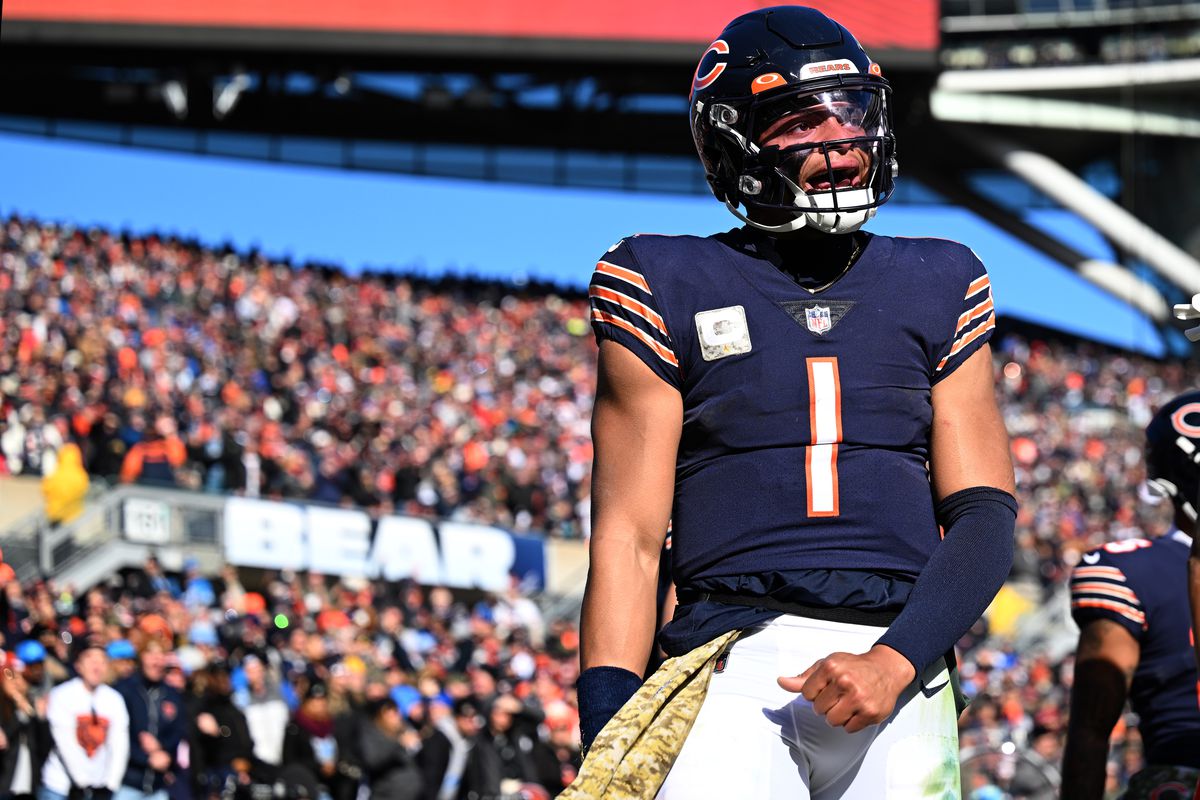 Fields has been on fire over the last month with an increase of 17.55% since October 18th. If you had invested $100 then, your bet would be worth $187.82 with his 5x  multiplier. However, there is still a lot of room for Fields to grow.

His current value of $28.86 is lower than that of Trey Lance and Zach Wilson and similar to players like Daniel Jones and Baker Mayfield.

Fields has been an elite rusher this year and he currently ranks 6th among all players in rushing yards with 749 yards  and 9th in rushing yards per game with 74.9 (16-game pace of 1198 yards)

Fields has not taken a massive leap as a passer, but his dynamism in the rushing game keeps the offense’s floor high anyway. Fields currently ranks 15th in expected points added/play out of 32 QBs with 176+ plays so far this season.

If Fields can match Zach Wilson's share price, a $500 long bet will be worth $769 with his 5x Multiplier.

Smith has taken a sophomore leap this season and currently has a 24% target share on his team despite playing alongside A.J. Brown and Dallas Goedert.

Despite this, his current stock price of $13.90 lies in a range of players who have proven far less than Smith has by his second season such as Mike Williams, Gabriel Davis, Jerry Jeudy, and Courtland Sutton.

Smith is also a good buy-low with his recent slump. Over the past three weeks, he currently has 18 total targets in a top offense in the NFL, yet has only converted that into 84 receiving yards (4.67 yards per target). There are better days ahead of Smith, especially with Dallas Goedert slated to miss a minimum of four games.

Ken Walker was a 21-year-old rookie who became the starter within the first five weeks of his rookie season. As a result, his window to accrue banked value is almost as large as it could possibly be.

Since becoming the RB1 in Seattle in the middle of week 5 when Rashaad Penny broke his leg, Walker has 17.7 carries per game for 88.3 rushing yards per game (five yards per carry) as well as seeing 2.8 targets per game.

Despite being a workhorse as a young rookie, Walker’s current price indicates a career arc much worse than players like Aaron Jones, Dalvin Cook, Joe Mixon, and Leonard Fournette, and more.

With any running back, there is more of a risk of missing time due to injury which would negatively impact share price, but all four of the previous names listed have missed major time due to injuries at some point and/or had less productive years as a result of splitting a backfield.

The case for Etienne is almost a carbon copy of the case for Walker, with a lower price and a better receiving profile. His one disadvantage is that he is a year older than Walker.

However, he has also taken over his backfield to the tune of 19.3 carries per game since taking over as the starter, which has resulted in 106 rushing yards per game (5.5 yards per carry).

Even more outrageous than Walker, Etienne’s share price of $10.93 implies a career arc of a player like Jamaal Williams, Devin Singletary, or Kenyan Drake which is dramatically underrating a first-round RB who has taken over a workhorse role in what is basically his rookie season (and excelled at it in the process).

Prices are current as of 11/18/22 at 4:00 pm EST
Akash Patel is a contributing writer on Mojo. All trades you make are with Mojo, which sets the lines as the “house”. Recommendations are for entertainment purposes only. Please use your own judgment and data to make trades. 21+. Must be in NJ to trade. Gambling Problem? 1-800-GAMBLER
About the Author: