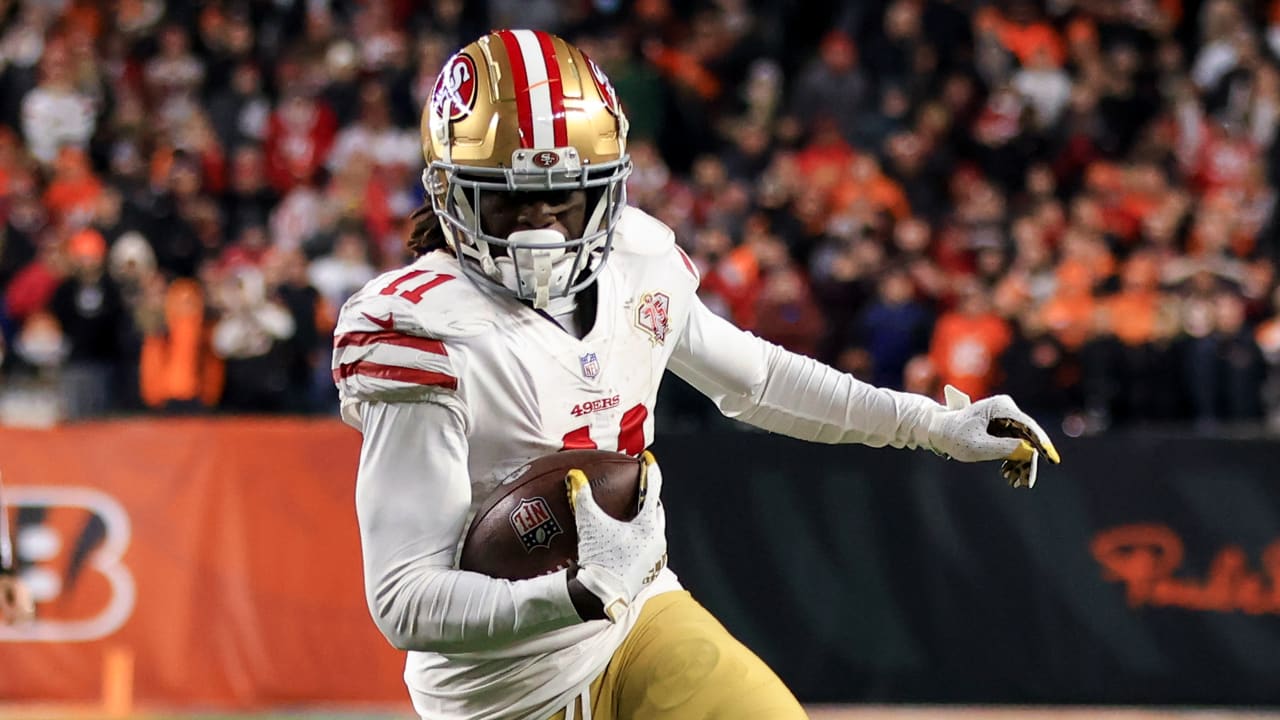 MNF is shaping up to be unpredictable. Vegas has no idea where this game is going to go given that the 49ers are favored by a mere -1.5 points. Perhaps the one thing we can say with certainty is that an NFC West team will get a loss in Week 4. Well… unless they pull a Week 1 Colts-Texans.

I am leaning into the chaos with four fairly unpredictable players to target in your Mojo portfolio going for pure share price upside. I’m feeling positive, so I’ll pick four players I would Go Long on.

Make sure you’re hammering the Multipliers if you have conviction in your trades to make price movement more volatile. (For example, Zach Wilson’s 4.5% gain yesterday was 45% with the free 10x Multiplier selected.)‍

As good as the Rams defense is, they have been notoriously bad at covering receivers through the first three weeks of this season. (The second worst in the league to be exact.)

Deebo Samuel is the more proven name, and his history against the Rams is impressive, but there is a lot of upside to having shares of Brandon Aiyuk for tonight. He is significantly cheaper, and buying low and selling high is always the motto. His poor showing in Week 2 may have been a product of Darius Slay Island.‍

In Week 3, the only time the 49ers passing game had success was when Jimmy G was getting the ball to Aiyuk. We should take note.

Unfortunately for those who want an explosive, high-scoring prime-time game tonight, I highly doubt this will be the case. Remember when I said the Rams defense has been good? Well, the 49ers have also been great allowing just five touchdowns so far this season.

However, given what we saw last season, McVay is not ashamed to try and pound the ground against this team anyway and since his underwhelming performance Week 1 against the Bills, Cam Akers has seen an increased snap count week after week.

Buy Cam Akers as LA’s RB1 while the market still has some concerns about Darrell Henderson stealing into his workload!

Kenny Pickett shot up 8% yesterday in an INSTANT when the Steelers decided to insert him over Mitch Trubisky in the 3rd quarter in their game versus the New York Jets. Injuries SUCK, but we saw both Bailey Zappe and Teddy Bridgewater’s share prices increase 20% over the last week as well when thrust into a starting role.

I am not suggesting that the 49ers, who are currently last in the NFC West with just one win, are going to bench their veteran quarterback for a rookie in a prime-time divisional matchup. But, what I am suggesting is that we never know what could happen.

With the injury to Trey Lance, Brock Purdy is climbing his way right up this San Francisco depth chart, and if anything were to unfortunately happen to Jimmy G, he would be next in line. We want to expect the best but be prepared for the worst and I want to be ready considering he is priced at less than $2.

There is absolutely a valid argument as to why Tyler Higbee could be a risky investment tonight and it all circles back to the 49ers defense.

But with Van Jefferson on the injured reserve and Higbee catching every ball that comes his way it’s hard for me to pass up on him. Everyone knows Cooper Kupp is the star of this show, but having options is never a bad thing!

This tight end has proven to Matthew Stafford that he can be exactly that.

Jordyn Erarde-Coupé is a full time employee of Mojo. All trades you make are with Mojo, which sets the lines as the “house”. Recommendations are for entertainment purposes only. Please use your own judgment and data to make trades. 21+. Must be in NJ to trade. Gambling Problem? 1-800-GAMBLER
About the Author:

Jordyn Erard-Coupé
Better known as SportyJordy from TikTok and YouTube, Jordyn is a proud Philly sports fan which tells you all that you need to know. She is always dropping hot takes and is never afraid to take the underdog. This reputation will continue on with her now as a Content Analyst for Mojo. Keep up with her takes everywhere @thesportyjordy!
You have successfully submitted
Oops! Something went wrong while submitting the form.
Please Enter A Valid 10-Digit Phone Number
By clicking ‘submit’ you agree to the terms of use and privacy policy. Phone numbers may be used for marketing purposes. Message and data rates may apply. Text 'Stop' to opt out.