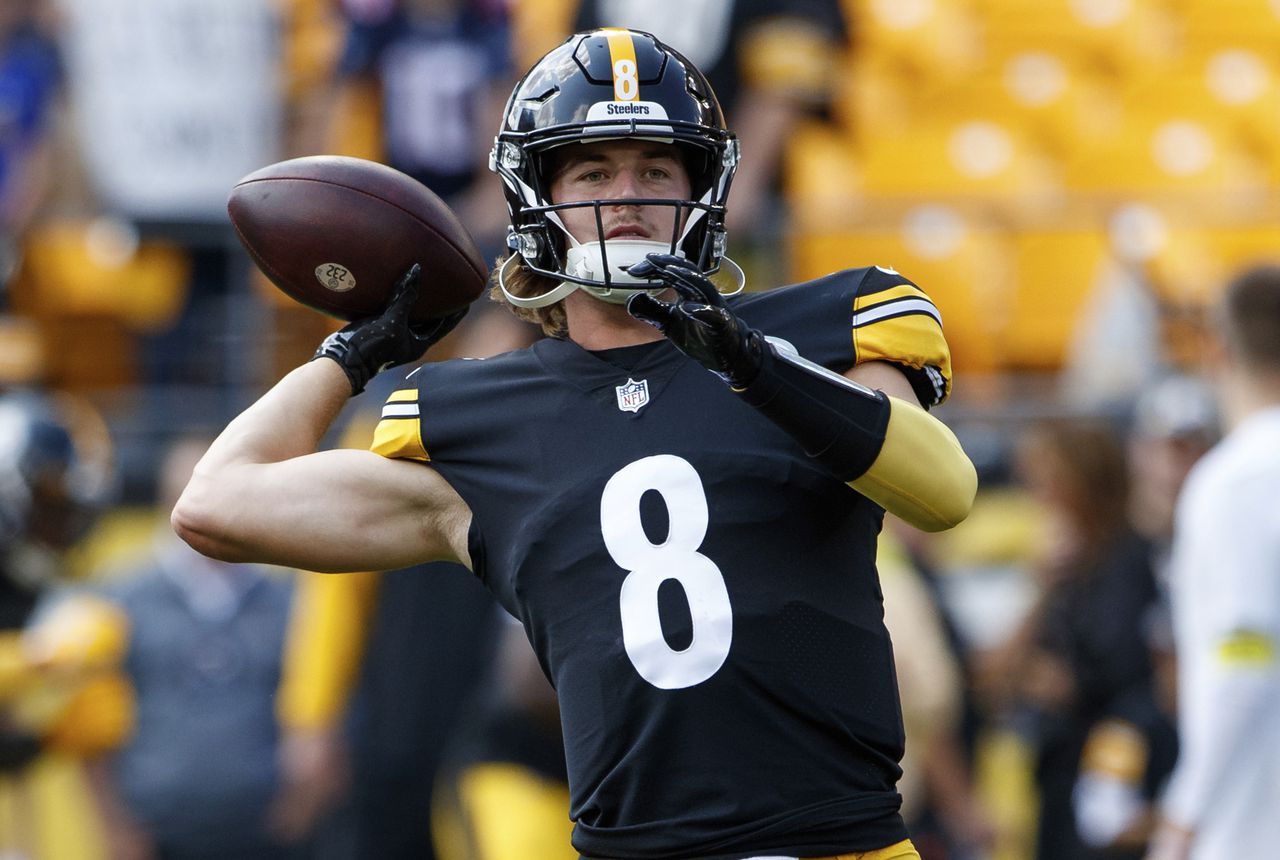 I am an NFL analyst that has been using sports collectibles as a method of investing in athletes for over a decade. A tale of victory I like to tell is the first car I ever bought was paid for from the proceeds of Aaron Rodgers rookie cards. I’ve had some pretty good days in the sports collectibles space, but I’ve been waiting for a sports stock market like Mojo for a very long time.

Even though Mojo share prices are based on expectations for objective career stats, I’m going to pair my ability to analyze players and their situations with my years of sports collectibles experience to help you improve your process on Mojo. That starts with a player that I view as underpriced: Steelers rookie quarterback Kenny Pickett.‍

When mapping out a range of outcomes for an NFL prospect I start with my own evaluations of the player and their landing spot. I love investing in quarterbacks in above average situations. Stable organizations that build smart rosters have a realistic path to being successful even if they don’t have an offense-carrying quarterback. We don’t need to invest in a future Hall of Famer like Rodgers to make money on a quarterback investment.

The Pittsburgh Steelers have been the definition of consistency in professional football for decades. Their head coach, Mike Tomlin, took over the team in 2007 and has never had a losing season. The Steelers are currently in a transitional phase as they move on from franchise icon Ben Roethlisberger, who is a major reason why Tomlin has never had a losing season. So this could realistically be a down year for the remarkably consistent Steelers. But long-term, you’d be hard pressed to find a more reliable football operation than the Pittsburgh Steelers.

I’m probably a little higher than consensus on Pickett as a talent, but I’m primarily interested in him on Mojo because he’s a first-round pick that is going to eventually start for the Steelers. Not only are the Steelers a remarkably stable organization as we’ve discussed, but they are also among the most popular brands in the sport. Performance and news drive share prices, but if there’s enough demand for going on long on Pickett based on the popularity of the Steelers brand, that could also push his price up. That’s the foundation behind any Pickett investment.

I have two core concerns about Pickett long-term. The first is that the AFC North is filled with well-built rosters headlined by dynamic quarterbacks, which could limit the market’s enthusiasm for Pickett and cap the Steelers playoff upside (remember, postseason stats count on Mojo). The second is that Pittsburgh’s offensive line is not very good right now, and that is very abnormal for the Steelers. The offensive line can be improved but the division looks like it will be among the best in the NFL for many years.

When you sift through the “find athletes” section on Mojo you have to get through 31 quarterbacks before you get to the first skill position player. Quarterback is the most valuable position on the field and so they have the most value here on Mojo. While we can potentially invest in a player at any position, if we can find a quarterback at a good value, we should strongly consider that option.

When comparing quarterback values on the platform, a few names really stuck out to me when valuing Pickett:

Can Kenny Pickett have an Andy Dalton level career?

‍Even if Pickett fails to the degree that Jones has, which is close to Pickett’s worst-case scenario, Pickett’s current price has a clear path to nearly tripling based on Jones’ present value.

Failed former second overall pick that threw 30 passes between 2020 and 2021. Mariota is playing well now in Atlanta, but he’s another relative floor case for Pickett.

Current Steelers starter that had his moments in Chicago, but is ultimately inconsistent and is already on his third team.

Second-year quarterback on a rebuilding team with third-round draft capital.

Kenny Pickett is $13.02 on Mojo as of this writing. He’s going to eventually take over at quarterback for the Steelers and, barring significant injury, will likely get between two and four years of slack to show what he can do. Considering how the Pittsburgh Steelers operate, I expect Pickett to get some time this year and at least three years as the opening day starter. In a worst-case scenario, he enters his fourth season in a similar position to Daniel Jones. In a near best-case scenario, Pickett’s Steelers look a lot like Tannehill’s Titans have over the last several years.

If the Steelers lose to the Browns on Thursday Night Football, Week 4’s home matchup with the Jets is a logical insertion point for Pickett. If that happens and Pickett plays well, it’s early enough where he’ll be a factor in the Offensive Rookie of the Year race. The Steelers have their bye in Week 9, making Week 10’s home matchup against New Orleans the next most likely insertion point for Pickett. Even if Pickett doesn’t play at all this season, which is possible as the Steelers are a patient organization, him starting on opening day next year is a near certainty.

Ultimately there are far more paths to Pickett’s value increasing on Mojo over the next couple of years, than there are of his price falling below his current value of thirteen dollars.

Ryan Reynolds is a contributing writer on Mojo. All trades you make are with Mojo, which sets the lines as the “house”. Recommendations are for entertainment purposes only. Please use your own judgment and data to make trades. 21+. Must be in NJ to trade. Gambling Problem? 1-800-GAMBLER
About the Author:

Ryan Reynolds
Ryan Reynolds is the Head of Betting for The 33rd Team and a sports betting/ fantasy football analyst for Establish the Run. Ryan has invested in athletes through the sports collectibles market since the early 2000's.
You have successfully submitted
Oops! Something went wrong while submitting the form.
Please Enter A Valid 10-Digit Phone Number
By clicking ‘submit’ you agree to the terms of use and privacy policy. Phone numbers may be used for marketing purposes. Message and data rates may apply. Text 'Stop' to opt out.