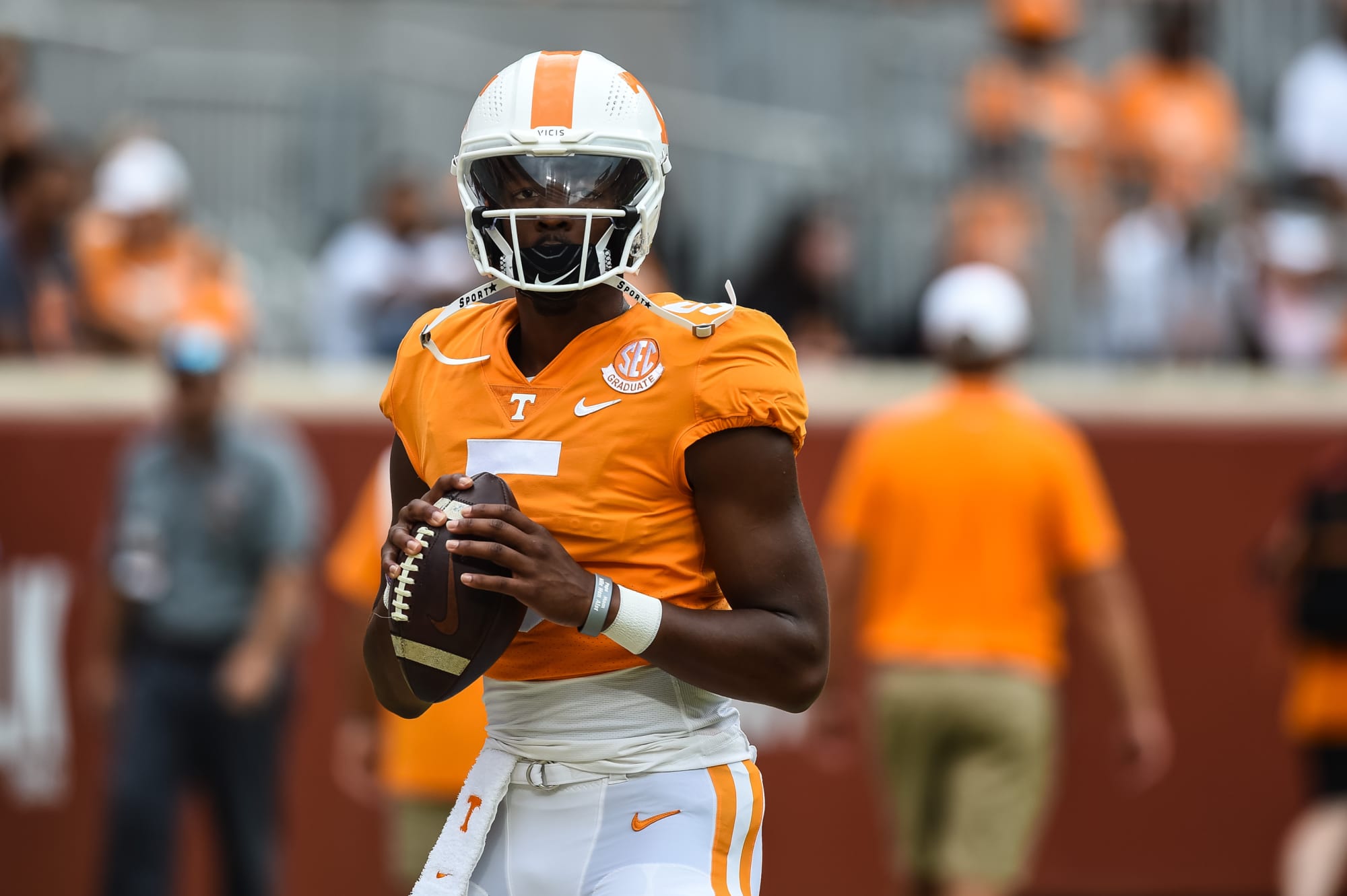 This is officially “Hendon Hooker Week”. The Tennessee QB has a chance to become a legend if he can beat Alabama, something the Vols haven’t done since 2006.

Hooker’s NFL and Heisman status could reach a boiling point with another strong game. He’s thrown for 51 touchdowns versus just three interceptions since taking the starting job midway through last season and has thrown for multiple touchdowns in eight consecutive games.

Now, he finds himself tied with Bryce Young for third in third current Heisman betting odds behind only C.J. Stroud and Caleb Williams.

He’s currently priced like a borderline round two or three prospect with plenty of room to spike into first round range. Win or lose, another strong game against Alabama’s defense and Hooker’s Share Price could explode.

The former five star recruit posted 95th percentile pass efficiency numbers as a true freshman and is at it again this year, throwing 14 touchdowns to just one interception through six weeks.

However, he hasn’t had a true “blow-up” game against a good defense this year. If he puts up huge numbers against Utah, the best defense in the Pac-12, it could go a long way towards cementing his potential superstar resumé.

Uiagalelei finally looks like the five-star stud he was billed as after taking over from Trevor Lawrence. Slowly rising, a date with the Seminoles represents a huge opportunity for the coveted “statement game.”

He’s above the 80th percentile in scheme-adjusted pass efficiency marks and his 19 Big Time Throws (Per PFF) lead the nation. While pushing the ball down field, he’s only thrown three turnover-worthy passes all season.

Add in what he can do with his legs, 300 rushing yards in six games, Uiagalelei could work his way back into first round consideration very soon.

Most draft pundits agree Levis has all the tools to be a first round pick and eventual NFL QB. However, his peak pass-efficiency marks coming into this season barely reached the 60th percentile.

While on pace to beat that mark by a wide margin, he’s set to face Mississippi State defense this week. They immediately become the toughest opponent Levis and UK have faced in terms of defensive efficiency.

He could see a nice bump in share priceif he’s able to maintain 10+ adjusted yards per attempt (AY/A) through the rest of the SEC schedule.

Through six weeks, McCarthy ranks second among all FBS quarterbacks in on-target percentage at 83%. Imagine that, a Michigan QB who can actually pass the rock!

This high pedigree star has first round potential. Expect his share price to climb drastically as his resumé gets a bit more extensive, starting with a game against the talented Penn State secondary this week.

Penny Stock SZN. Duggan has slowly grown into an incredibly draftable quarterback prospect. He dialed back his average depth of target (aDOT) this season for the sake of efficiency. In turn, his adjusted completion percentage (adjusting for aDOT, drops, etc) is over 82%, fourth among all QBs with at least 90 attempts.

He’s also second in adjusted net yards per pass attempt among all FBS passers in the nation! This is a sudden yet real skills improvement that has not yet been reflected in his Mojo Value. A big game against Oklahoma State could grab the national media’s attention.

The stats will not look pretty, but NFL teams want to see traits and McKee has them. It will be interesting to watch him against a Notre Dame defense littered with NFL prospects.

Prices are current as of 10/14/22 at 4:00 PM EST
James Schiano is a full time employee of Mojo. All trades you make are with Mojo, which sets the lines as the “house”. Recommendations are for entertainment purposes only. Please use your own judgment and data to make trades. 21+. Must be in NJ to trade. Gambling Problem? 1-800-GAMBLER
About the Author: