What Did We Learn From Zach Wilson in Week 4? 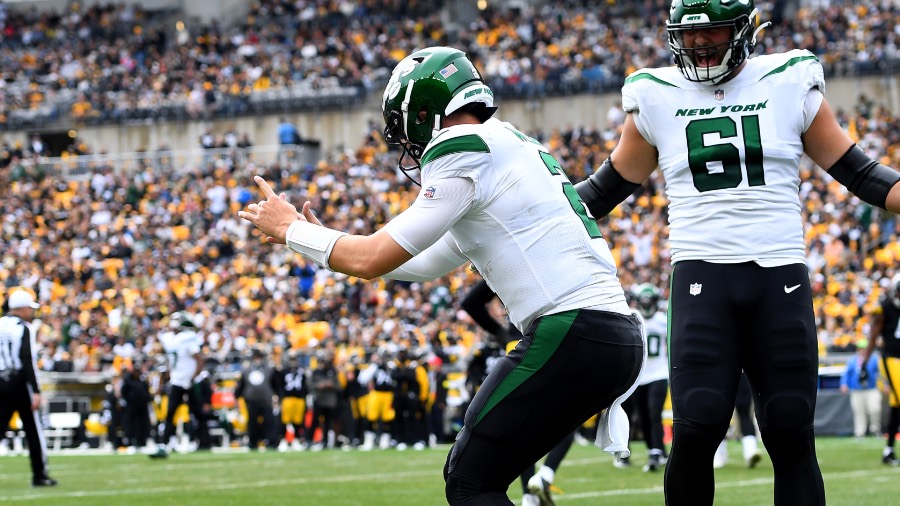 Zach Wilson (+4.82%) had an up and down performance in his season debut, but the market gained confidence in his long-term career prospects overall. Should you Go Long on his stock?

He showed impressive composure in orchestrating a fourth quarter comeback, including a late game-winning drive. He went 5/5 for 57 yards in a two minute drill and had six fourth quarter first downs (first downs are among the stats that count in Mojo Value). His 252 passing yards were the third most in a single game in his young career.

This was achieved against Pittsburgh’s 12th ranked passing defense, according to Football Outsiders.

I’m still not sold. Why? It wasn’t the multiple turnovers or the 59 Passer Rating. No, it’s that I still haven’t forgotten last year, which was one of the worst rookie seasons statistically by a first round pick of all-time.

I wrote up second year quarterbacks and found his past comps statistically based on his rookie year, draft spot, and age included players such as Tua Tagovailoa (encouraging)... but also Mitchell Trubisky, Mark Sanchez, David Carr and Joey Harrington (alarming). None of those players saw or have seen significant playing time after their rookie contract (excluding Tua, who is still on his rookie contract).

I adore his weapons. Wilson gets to throw to a potentially elite young wide receiver duo in Elijah Moore and Garrett Wilson. Coming into Week 4, Garrett Wilson had the most targets for a first round wide receiver in the last 25 seasons. His profile as a prospect is squeaky clean; I like (Garrett) Wilson’s chances of becoming a superstar.

Moore has flashed in his young career... and he’s certainly gotten in a lot of cardio in this year. In fact, he had run the most routes of any wide receiver in the league heading into Week 4. He was a very impressive collegiate prospect and, coupled with an elite five game stretch as a rookie last year, I would be surprised if he does not pan out as well.

Overall, the decision to Go Long or Go Short comes down to whether or not Wilson earns a second guaranteed contract. If he does, then he’s an easy "buy" who could double in value by the end of the season if things break right. If he does not, you should short him. I discussed Wilson with Nick Ercolano at BDGE last week and compared him to Trubisky (who is currently about $23 per share with room to drop further).

His short-term price might move up based on the weapons elevating his play, but I would prefer to Short his stock (with a Multiplier if you are a skeptic like me) due to the unlikelihood that he is a long-term starter.

Prices are current as of 10/02/22 at 11:00 PM EST
Dalton Kates is a full time employee of Mojo. All trades you make are with Mojo, which sets the lines as the “house”. Recommendations are for entertainment purposes only. Please use your own judgment and data to make trades. 21+. Must be in NJ to trade. Gambling Problem? 1-800-GAMBLER
About the Author: