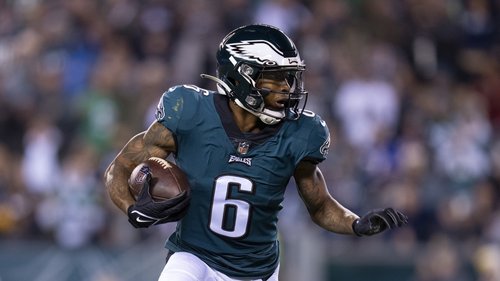 Anytime you can get praise from Bill Belichick it’s usually a good sign.

Bill had this to say about Stevenson in regards to the passing game: “Rhamondre has done a real good job improving his pass-game skills.”

Mark Daniels of Projo said, “It really sounds like Stevenson is the Patriots third-down back.”

We love to hear all these reports on him due to all the flashes he showed as a rookie. He offers full three down capabilities in a workhorse frame.

The biggest roadblock to this is Damien Harris who is still a really good running back, but all signs show that Rhamondre is going to have a roll in this offense. If anything were to happen Harris, there’s a fun upside scenario in which Rhamondre Stevenson is one of the better running back in the league.

Gibson fumbled during preseason week 1 and things at practice haven’t exactly been encouraging since.

According to Sam Fortier of the Washington Post, Gibson was playing special teams snaps today, which is a new development.

Nicki Jhabvala of the Washington Post threw some more fuel on the fire when Gibson was working with the third-string offense today.

Commanders offensive coordinator Scott Turner had this to say about Gibson’s fumbles today: “You can't waste a possession; if you fumble the ball that's a waste of a possession. The first job is to protect the ball. It's something that has to be fixed."

Gibson actually has been decently productive through his first two years, but there has been signs that maybe there has been some writing on the wall with his future. With the Commanders re-signing JD McKissic away from the Bills in free agency and selecting Brian Robinson in the third round of drafts, it’s clear they wanted some competition at the position.

I’m not sure if I’m fully buying that Antonio Gibson is going to be completely fazed out of the offense, but it does seem clear that this backfield is trending towards a committee as the season starts.

Adam Schefter of ESPN said this in regards to Joe Flacco after Zach Wilson’s surgery: “Jets’ QB Joe Flacco is in line to start the regular-season opener vs. his former Ravens team.”

And Joe Flacco also had an incredible day in camp.

Zach Rosenblatt of the Athletic said today was “one of the offenses best days of training camp.”

Joe Flacco threw for 291 passing yards with two touchdowns and no interceptions in his lone start last season. That single game stat line was better than any game Zach Wilson started in last year.

Vegas also only moved the point spread by one point in favor of the Ravens during week one as the drop off in quarterback play is likely to be minimal.

While I’m not sure if I’m willing to go there yet, but there’s a discussion to be had that this might actually be an upgrade to the offense.

After missing training camp early on with an injury, Devonta Smith is back and ready to roll.

He’s picking up right where he left off after an impressive rookie season. Josh Tolentino of the Philly Inquirer had this to say about Smith: “It’s the DeVonta Smith show again today in south Philly. He hauls in another pretty reception along the left sideline. Used his body to box out McPhearson, and leaped to grab the ball from Jalen Hurts. Double coverage too.”

Brandon Lee Gowton of Bleeding Green said a short but profound statement regarding him, “Again, Devonta is good.”

I’m buying all the DeVonta Smith love right now as he had an incredible rookie season and has comparable that include players like Calvin Ridley and CeeDee Lamb  after their rookie season.

Assuming he stays on the field, AJ Brown and DeVonta Smith can quickly become one of the premier wide receiver duos in the league.