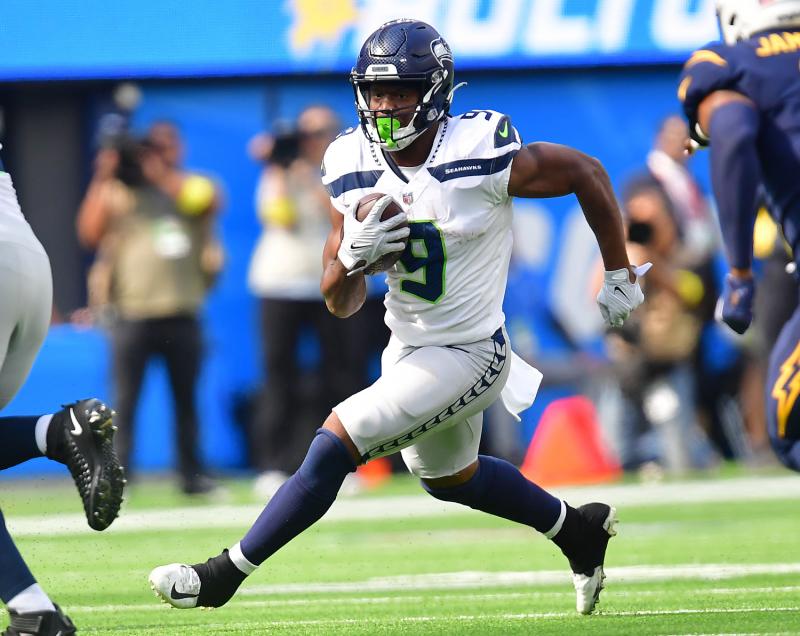 “He’s not a good pass-catcher.” “His route tree is limited.” It’s interesting to observe a running back being critiqued for his limited skill set as a pass-catcher – he’s a running back. Yes, today’s running backs are being asked to do more than ever, but there’s absolutely nothing wrong with simply being an elite runner.

Walker III played for Wake Forest to kick off his collegiate career, and he was a very efficient runner, averaging 5.3 yards per carry on 217 attempts. Then in 2021, he transferred to Michigan State and broke out. He toted the rock 263 times, and rushed for a whopping 1,636 yards while finding the end zone 19 times. He also reeled in 13 catches for 89 yards – but of course, that doesn’t matter to some.

When I turn on his tape, I always come away impressed with his lethal combination of elite lateral agility and pure beast-like ability when contacting defenders. What’s more, his vision and 4.38-second 40-yard dash speed are easy to see. He’s a special talent, and he needs to be treated like such when you’re deciding whether or not to Go Long or Short with his 3x Multiplier. Here’s my advice: Go Long and don’t look back.

Through his first seven games, Walker III has rushed for 461 yards on 85 carries (5.4 yards per carry). He’s already flashed his impressive play-making ability, and he’s quickly climbing running backs rankings for the short term and long. And with Rashaad Penny out for the season, there’s no reason to believe that the Seahawks won’t continue to feed the youngster. I think he'll have a better career than Melvin Gordon ($16.21). He’s only banked $0.83 in Mojo Value, so there's a long way to go to reach $12 in Mojo Value, but all things considered, only serious injury will stop the former Spartan from returning value.

Coming into the season, Albert Okwuegbunam looked like the number one tight end option in Denver. Then comes Greg Dulcich who’s accumulated 182 yards on 12 grabs through his first three career games. The 6-foot-4, 243-lb tight end enjoyed a solid four-year career at UCLA. And in his final season, he caught 42 passes for 725 yards and five touchdowns. Even with ‘Albert O’ around, the Broncos liked him enough to select him 80th overall in this year’s draft, which probably should have been a red flag to all of us that maybe they did not fully trust Okwuegbunam!

He’s an athletic tight end who has a good feel for getting open, especially against zone coverage. On top of that, he’s fearless at the point of the catch, which could make him a go-to target for whoever’s throwing him the ball. Okwuegbunam has been a healthy scratch for a few weeks now, which tells us that the Broncos have no problem  featuring the rookie. With all this being said, Dulcich’s share price is at $2.87 at the time of this writing – and trending up (31% over the past month). The current rookie tight end leader in receiving yards has the tools to be an above-average contributor in the NFL. I think he should be priced closer to Dawson Knox ($7.19) and Cole Kmet ($6.32). Go Long on the 22-year-old, and enjoy what should be a very productive career.

I'm a sucker for a 6-foot-1, 212-lb route-runner technician who knows how to gain separation off the line, display strong body control, block well, and track footballs with ease. I’ve just described for you David Bell, the rookie wide receiver who’s being overlooked by too many. Bell broke out in his freshman year at Purdue (a good indication of future success), hauling in 86 catches for 1,035 yards and seven touchdowns. And in 2021, he enjoyed a 93-1286-6 campaign.

All he’s done is produce big numbers, but his slow start to his NFL career could have some reanalyzing the young wideout. I’m here to tell you that if Bell’s slow start has you concerned, you need to take a deep breath and continue to exercise patience. Not only is he starting his NFL career with Jacoby Brissett as his quarterback, but he also plays in an offense that features Amari Cooper and attacks defenses with a run-first approach. That’s not necessarily a recipe for success for a rookie wide receiver who’s looking to make an immediate impact at the highest level.

Thankfully, players’ situations can improve rather quickly in the NFL. And unless something changes, he’ll likely be catching passes from Deshaun Watson in about six weeks. With all that being said, going Long on Bell today could pay off big time in the future. The aforementioned roadblocks that are in his way will likely cap his ceiling in the short term, but it’s worth noting that his usage has been trending up over the past few weeks. With his share price sitting at just $4.11, there’s clearly plenty of room for growth. The best time to invest in David Bell was as soon as he became available on the Mojo App. The second best time is today.

11/01/22 at 11:59 pm EST
Micah Henry is a Contributing Writer on Mojo. All trades you make are with Mojo, which sets the lines as the “house”. Recommendations are for entertainment purposes only. Please use your own judgment and data to make trades. 21+. Must be in NJ to trade. Gambling Problem? 1-800-GAMBLER
About the Author: