Is Jared Goff the Long-Term Answer for Explosive Lions? 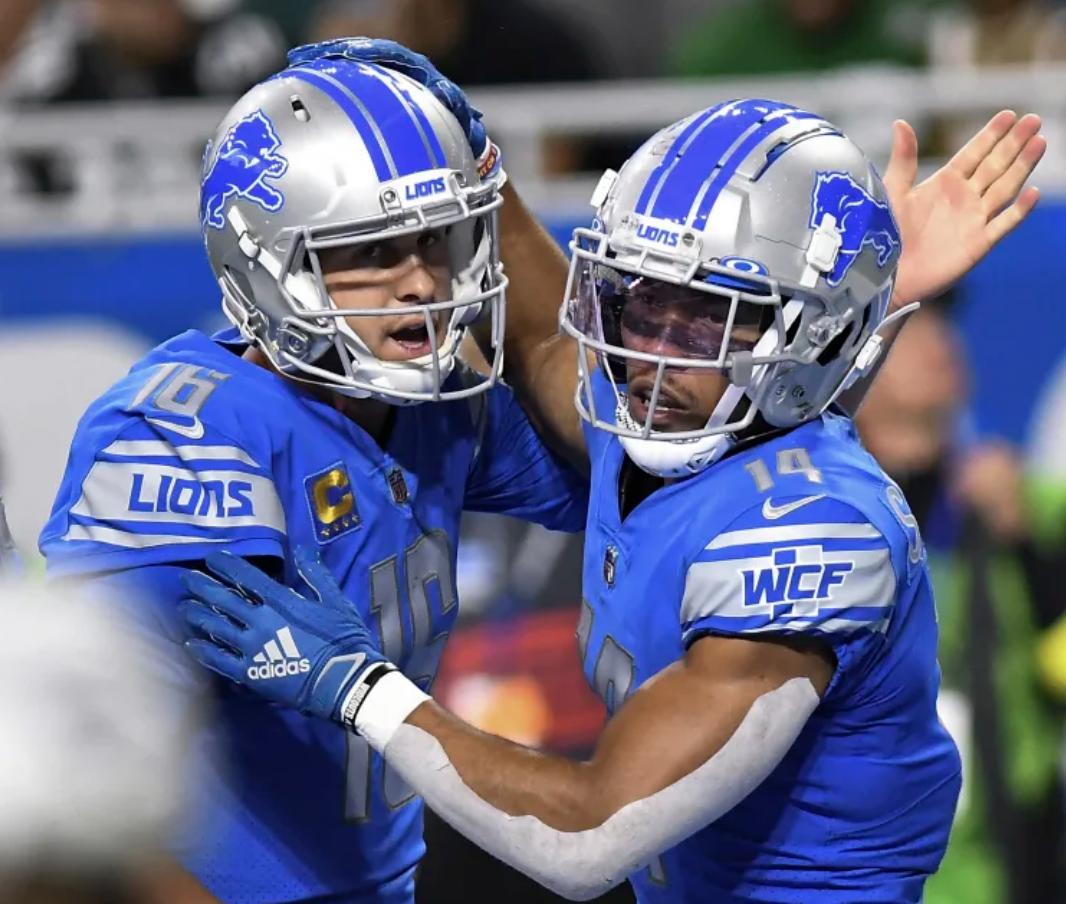 “Jared Goff is a placeholder until the Lions find a real QB,” we’re told. Really? Are we sure about that?

He’s a former first-overall pick who is not yet 28 years old. He’s just two years older than Joe Burrow. “Okay,” you say, “but Goff stinks.” Last year, I hear you. He was well below average with 39.5 QBR (24th). His YPA was 6.6 (27th). Flash forward to this year with significantly upgraded skill talent that was mostly offline last week and with a first-round pick in Jameson Williams who hasn’t even suited up yet: his QBR is eighth and YPA 11th.

In Week 4 versus the Seahawks, Goff had his best QBR of the year (74.8) and averaged nearly 10 yards per attempt — without his alpha WR (Amon-Ra St. Brown) and top receiving threat at RB (D’Andre Swift). His last two games of 2021 were outstanding in QBR at 93.8 and 83.6, respectively. And over his last six games, his QBR is 74.9, third in the NFL and higher than Josh Allen’s (among many).

In the near term , he’s going to be operating an offense with St. Brown and Williams (one of the fastest WRs of the modern era pre-ACL injury), Swift and a top-drafted tight end in T.J. Hockenson, who only went 12-179-2 with a two-point conversion in Week 4. Tell me the other QBs who have anything approaching this level of skill talent. Remember, St. Brown just set an all-time record with eight straight games with at least eight catches (and eight touchdowns). He’s not yet 23. Swift is playing his age 23 season. Williams is 21. Hockenson is the old man playing his age 25 season.

And this is in a Rams-style system that has generally maximized QB value.

Yet, Goff's price this season is up only about 7.6%. And his future value is $13.49 with $33.96 banked. Dak Prescott is over a year older yet has almost twice as much expected future value. In the near term, even when Prescott returns from his thumb injury, Goff is likely to put up better numbers because he’s surrounded by better players and because he will be forced to throw more given the fact that the Lions toothless defense.

I get that the expectation since they traded for him was that the Lions would just cut Goff after this year when the cap savings is about $20 million and move on to draft a QB. But do we think the Lions are going to be in the mix for a top QB in the draft? Or that their record will be that bad? Their expected record now is 2-2, according to Pro-Football Reference. They are probably winning at least six or seven games and have the No. 1 offense.

They also have the last-ranked defense in football (yards and points). So, they obviously need to draft defense. What is the likelihood of a team with even a top-five offense led by a QB in his 20s starting over with a new QB? It would be unprecedented. And you can’t say this can’t be a top-five yardage and scoring offense when it’s No. 1 as we near the quarter turn of the season.

So why isn’t it more likely they extend Goff beyond 2024 than move on from him after 2022? If they do, he has an indefinite future with elite skill talent in a friendly system and should, at a minimum, put up numbers commensurate with Prescott. Giving Goff Prescott's future value results in about a 28% return on investment that can be realized with the stroke of a pen this coming offseason if not sooner.

Prices are current as of 10/5/22 at 2 PM ET
Michael Salfino is a Contributing Writer at Mojo. All trades you make are with Mojo, which sets the lines as the “house”. Recommendations are for entertainment purposes only. Please use your own judgment and data to make trades. 21+. Must be in NJ to trade. Gambling Problem? 1-800-GAMBLER
About the Author: