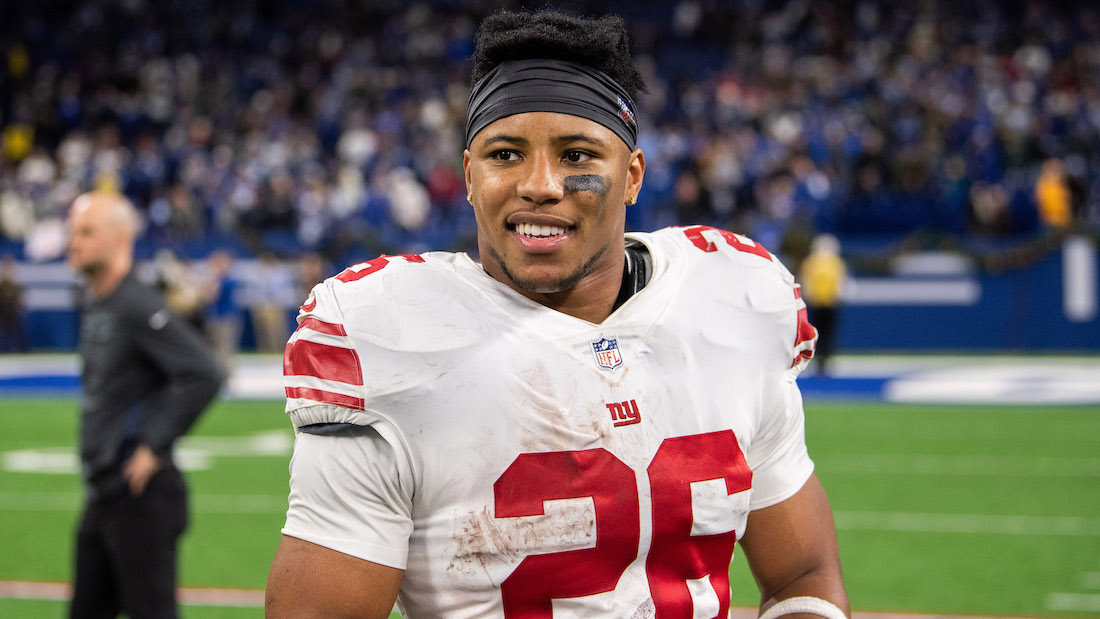 Each year, there are a slew of running backs that become free agents for a variety of reasons. Maybe a team didn’t pick up a fifth-year option, like the Raiders with Josh Jacobs. Or maybe they made other moves to push out a veteran, like the Bills drafting James Cook and trading for Nyheim Hines. Either way, veteran backs often become available on the open market.

Sometimes this can be good for their Future Value. Other times, it can be very bad. Usually, a team is letting their running back go because they are declining and not the same player they were earlier in their career.

Luckily with Mojo, there’s a way for us to bet on the future of these running backs. This particular article highlights three running backs that are set to become free agents ahead of the 2023 season and appear to be declining. Have a read to see if you should be Going Long or Short on these guys before they sign their new contracts. Whatever way you play, use their Multiplier to supercharge your bet.

Barkley is the fifth-highest priced running back on Mojo with a share price of $18.68. He falls in between Nick Chubb (Future Value of $7.62) and Alvin Kamara (Future Value of $3.51). However, with a future value of $9.75, Barkley trails only Breece Hall ($10.02) in that category. That means the market expects him to earn the second most value of all running backs between now and when he retires.

Barkley came into the league and was immediately labeled a “generational talent” by many. This was only exacerbated after his rookie season in which he totaled more than 2,000 yards from scrimmage. Since then, however, he’s battled through multiple injuries and has been relatively inefficient with his opportunities.

Barkley has been healthy this season and gotten a full workload so far. He’s been good at times, but still generally inefficient, averaging just 4.6 yards per touch (compared to 5.8 yards per touch as a rookie).

Despite this, the market expects him to accrue more value between now and the end of his career than he has between his first game and now. The nearly 26-year old is set to become a free agent in 2023 and could find himself in an entirely different situation. While some team could give him a nice payday and big role, it’s unlikely Barkley can perform at a level similar to what he did earlier in his career for another four to five years.

If you’re like me and think Barkley’s share price will decrease over time, you can Go Short on his stock right now. Don’t forget to supercharge your bet with his 3x Short Multiplier! That means, whatever percent he falls, your profits will be multiplied by three. So, looking at the past month, Barkley’s stock has dropped 5.5%. With his Multiplier, you could have profited 16.5%!

There’s even more money to be made if you think his share price will fall even more, which I do.

Singletary has been a relatively consistent producer for the Bills since his rookie season in 2019. He’s averaged over 1,000 total yards each of his first three seasons in the league. Right now, he sits at 872 total yards with four games remaining, so he’ll be close to that 1,000 total yard mark once again.

The difference with Singletary now as opposed to earlier in his career– and even earlier this season– is that he’s fighting with two other backs for touches. Rookie James Cook and newly-acquired Nyheim Hines are taking opportunities from Singletary now more than ever. In fact, Singletary has played less than 50% of the snaps in each of the last two games after playing more than 70% in six straight games beforehand.

Like Barkley, Singletary is set to become a free agent after the 2022 season and it seems highly unlikely the Bills will keep him with Cook and Hines on the roster. That means he will likely find himself on a much worse offense in 2023 and that could hurt his future production.

Speaking of Future Value, the market believes Singletary will accrue $2.78 between now and when he retires. That’s over a full dollar more than Hines’ future value, and I believe Hines will have the better opportunity to carve out a more valuable role for the Bills in 2023 than Singletary will on another team next season.

Go short on Singletary’s stock now and supercharge your bet using the unique 10x Multiplier. If his value falls another 7.1% (like it has over the past month) between now and the end of the season, a $1K bet would be worth $1.7K.

Hunt is yet another running back who is set to become a free agent after the 2022 season. He’s spent seven years in the NFL and will be 28 by next season.

He looked really good in his first two seasons as a complementary back to Nick Chubb in Cleveland averaging over 70 total yards per game across 2020 and 2021, but that number has dropped to 46 YPG in 2022.

Additionally, the lack of interest by other NFL teams around the trade deadline this season should tell you a lot about how other teams feel about Hunt. Many teams would rather roll with a younger, more spry back than pay even a fourth or fifth round pick price for a depreciating asset like Hunt.

He will likely find himself on another team in 2023, but it’s hard to imagine him getting back to his pre-2022 levels of production. Hunt is likely just an inefficient complimentary piece to a backfield at this point in his career. Go Short on his stock and use the 5x Multiplier in order to increase your return on investment.