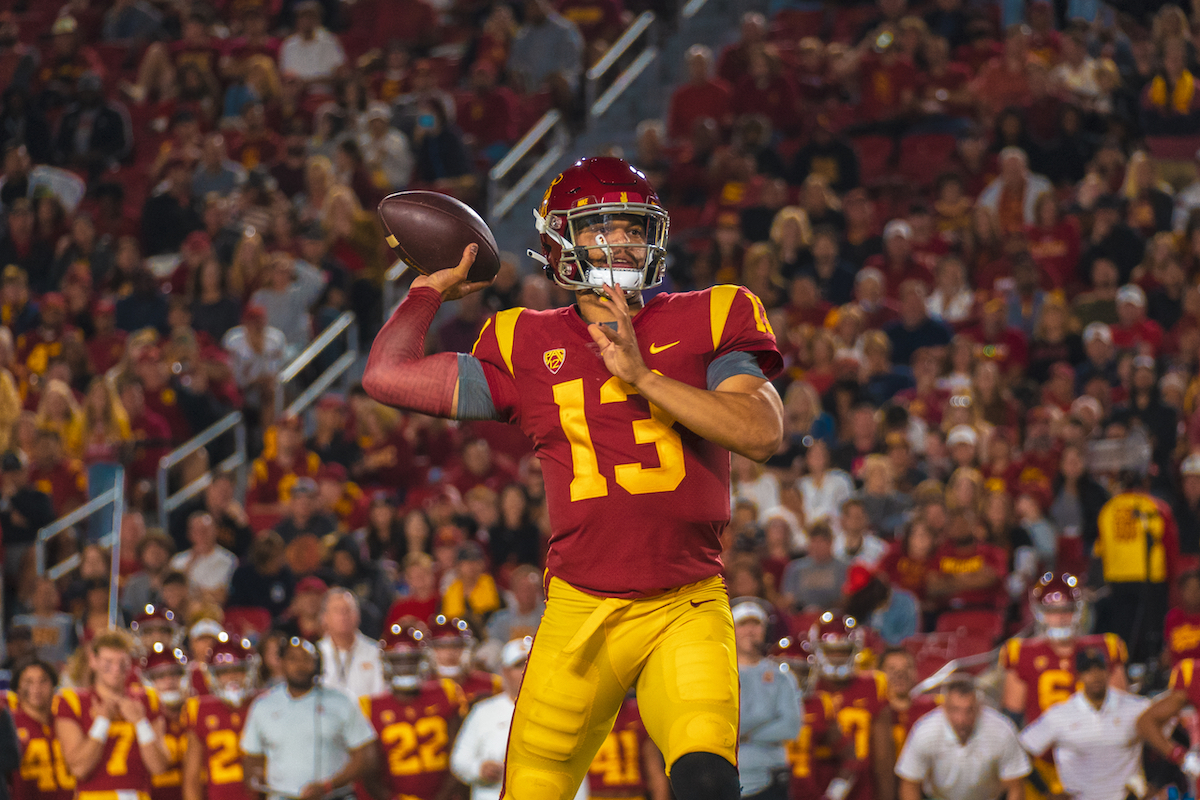 Week 12 of the college football season saw quite a few shocking results. Should our opinions of prospects, and their share prices on Mojo, fluctuate very much game to game? Remember, a player’s share price reflects statistical expectations in their NFL career. For NCAA prospects, college stats only matter if they affect how the Mojo market views their NFL careers, beginning with where they’ll be drafted.

College production is a great indicator of what a player can become in the NFL, but I see some overreactions from last week.
Let’s take a look at two QB prospects whose stock ticked up after tremendous statistical performances in Week 12. (Make sure you tack on their 3x Multipliers if you want a chance for higher returns in a short period of time.)

An uber prospect, Rattler still flashes jaw-dropping arm talent. However, there have always been some nagging questions about his overall makeup. His high school senior season was documented on the show QB1, where off-field antics got him suspended. He’s also been the center of team squabbles while at Oklahoma. In ‘21, between injuries and a decline in production, he was benched for true freshman Caleb Williams (more on him in a moment). Rattler transferred to South Carolina and, while there has not been much drama, his play has been mediocre.

Well… that was until November 19th, 2022. Rattler lit up #5 Tennessee to the tune of 438 yards and SIX touchdowns. (He had just eight TDs in the first ten games.) Some beat writers think he may have redefined his career. His Mojo stock soared over 17%, which I consider an overreaction.

After the Tennessee game Rattler sits with Washington rookie Sam Howell ($4.64). While Howell’s NFL career is yet to be determined, he had a better college career, locked in fifth round draft capital with the Commanders, and even had a great preseason.

On the other hand, Rattler may not be drafted at all. With Saturday’s bump, I think Rattler’s price is too high given the unknowns surrounding how he will fare in the pre-draft process. Howell and Rattler are both likely career backups, but at least with Howell, his standing on an NFL roster is more secure.

A $500 investment in Spencer Rattler on Friday with his 3x Multiplier would be worth $759 by the end of the weekend. Rattler’s gain teaches us that short-term prospecting is a very viable strategy in the Mojo market.

The new face of USC football is already priced as a future first round pick, and deservedly so. In my opinion, I think his stock should have gone up more than Rattler’s. What are we betting on in the Mojo market? Future NFL statistical production. We do not care if a player throws six TDs against a bad defense. We care about what these Saturday games mean for future Sundays.

Williams was 32-43 for 470 yards, two TDs and an INT, while chipping in 33 yards and a touchdown on the ground vs UCLA. The performance boosted his Heisman odds from +1200 to +120 overnight and kept USC in line for a potential playoff berth. Should Williams win the Heisman as a true sophomore, he would join Tim Tebow, Mark Ingram, Johnny Manziel, Jameis Winston, Lamar Jackson and Bryce Young as second year players to hoist the trophy. That’s five first round picks, and it’s a foregone conclusion Young will make it six in 2023. Of that group, only Tebow and Manziel have not had good (if not great) NFL careers.

A Williams Heisman win should reasonably push Williams’ stock on par with Jameis Winston ($37.87) and Bryce Young ($36.17). From where he’s sitting now, Williams has about 16% growth potential to match Young. Zach Wilson, who was taken 2nd overall in ‘21, had an IPO price on Mojo last season of over $40 per share! Williams also has a reasonable ceiling of Lamar Jackson ($69.07), if not higher.

The lesson here? Well, for one, Go Long on Williams with his 3x Multiplier! But more broadly, you can take advantage of quick gains in the Mojo market based on standout college performances on the lower-tiered players facing weak competition. Rattler was primed to be in a smash spot vs. a poor Tennessee defence, and thus get a stock boost in this matchup. Get in, watch the stats blow up, and get out for a quick payday!

Campus2Canton
Campus2Canton covers over 600 college and NFL position rankings, high school recruiting coverage and more.
You have successfully submitted
Oops! Something went wrong while submitting the form.
Please Enter A Valid 10-Digit Phone Number
By clicking ‘submit’ you agree to the terms of use and privacy policy. Phone numbers may be used for marketing purposes. Message and data rates may apply. Text 'Stop' to opt out.