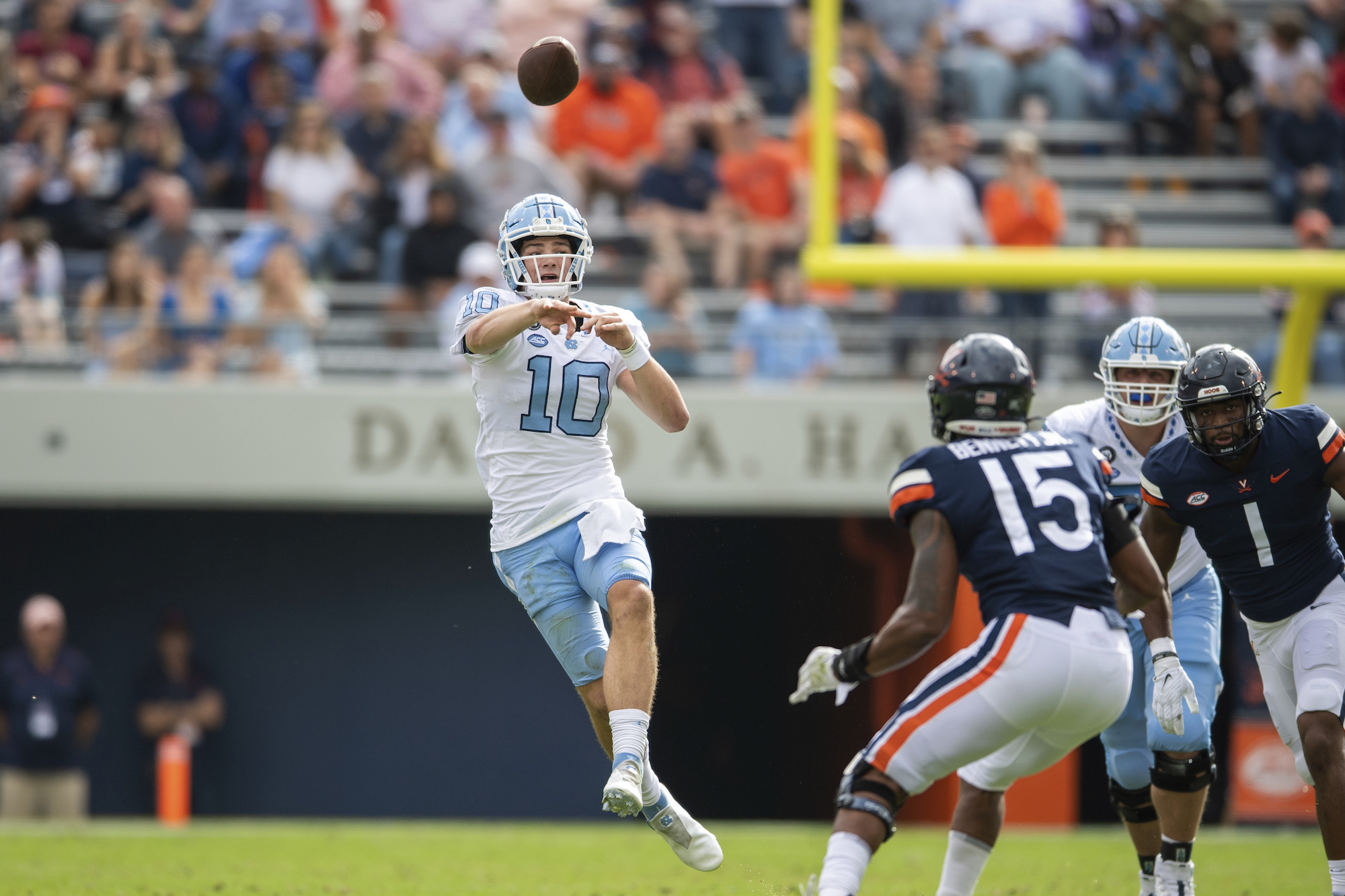 ***NOTE: ALL COLLEGE QBs HAVE A 3x MULTIPLIER AVAILABLE***

It’s hard to remember the last time Alabama played a regular season game where they had no chance to reach the College Football Playoff. Alas, here we are. Such a shame.

Now, the focus of their season shifts to Young and his pursuit of the number one overall draft slot. However, we must ask the question… is he still the obvious QB1?

He’s dropped to the eighth highest PFF grade, fallen outside top 30 in adjusted completion rate and passer rating, and is just 27th in adjusted yards per attempt.

Moreover, only four of his 19 touchdown passes have come on passes of 20+ yards downfield. That’s fewer than Tanner McKee, CJ Stroud, Anthony Richardson, and a whopping 10 20+ yard TD throws than TCU’s Max Duggan.

Young remains an elite mover with top-end accuracy, but hasn’t put out the best tape against his fiercest competition and is just six feet tall and 190 pounds. The market still projects him to go first as he’s more expensive than Stroud. The margins are slim, though.

It’s hard not to call Ewers’ season disappointing to this point. He’s only thrown for more than 300 yards once, has a paltry 57.8 completion percentage, five interceptions in six games, and very few deep completions.

He’s only two years removed from being the highest graded QB recruit ever, which is keeping his price high. That mantle has been snatched by Arch Manning, who’s enrolling to Texas early and on his way to campus just after the new year.

Ewers stock is more expensive than Will Levis and Hendon Hooker, two near first round locks in this coming draft while no longer being a shoe-in for an early first round selection in 2024. His price is in danger of tanking with more subpar play and a potential QB competition looming.

Are you not entertained?! Maye has ascended from exciting freshman to marquee talent and Heisman contender in a very short time this season.

He leads the nation in yards per game and completions greater than 20 yards, second in TD% and 20+ yard TDs, fourth in AY/A, and one of just 11 QBs with an INT% below one. He is a superstar.

Yet, his share price sits well below Caleb Williams and Ewers, the two supposed top QBs in the 2024 draft class. Maye is far, far superior to Ewers and on Williams’ tier. His stock will rise FAST when the world catches up.

The Clemson QB battle wages on. They were throttled by Notre Dame last week and Uiagalelei was benched for the second straight game. Some more deja vu: Klubnik played poorly in relief. So, poor Dabo Swinney actually brought Uiagalelei BACK into the game after a bad Klubnik interception.

As each highly touted QB struggles, it’s becoming clear that this new variation of Clemson is far removed from their reign of terror. The coaches are failing, scheme lagging, and offensive weapons lackluster.

These two are part of just 10 college QBs with a share price over $10. That’s a step above recent mid-round draftees Malik Willis, Desmond Ridder, and recent starter Bailey Zappe. They should be avoided unless you see (at worst) a top three round draft selection in their future.

Tennessee got their revenge on Alabama, then LSU joined in on the fun, could Ole Miss be next in line? If they do, like Tennessee and LSU, the Rebels will need a huge game from their QB.

Dart is capable of such. He’s one of just two QBs (along with Bo Nix) to be averaging over 8.5 yards per attempt and 5.5 yards per carry. That type of run-and-gun style is synonymous with Lane Kiffin’s wide open system and Dart is mostly executing it.

Still, his elite size, athleticism, and arm strength have him creeping up 2024 draft boards. If his price were to rise to where Hendon Hooker’s ($16.72), a likely first round pick who is older and has a worse arm, is right now, your investment would more than double.

So, get in on Dart if you think he’s trending towards first round status.

Jefferson will make his 30th start for the Razorbacks this weekend. One of the most experienced QBs in the nation, he’s also one of the most effective. He’s one of just three QBs with 400+ rushing yards and over 9.5 AY/A so far this season.

It’s unlikely he becomes an NFL star, but his combination of size, experience, and arm strength are certain to get him drafted. His price is almost identical to Malik Willis’ just after the draft, signaling his status as a fringe Day 2 selection.

Once upon a time, Penix was a high-profile QB prospect. Sadly, injuries have partially zapped his athleticism and knocked him down a few pegs. He’s still a fantastic college QB, though.

Second in total yards per game, 16th in yards per play, and the third fewest turnover worthy play rate in the entire country keep Penix on the NFL radar. Just such a shame when three consecutive seasons were cut short due to injury.

Daniels is feeling himself a little bit fresh off his dramatic victory against Alabama. He’s scored 14 TD over his last three games against Bama, Ole Miss, and Florida and is the only QB in the country with over 8 AY/A and more than 600 total rushing yards.

His stock is rising fast and could moon if LSU finds a way to sneak into the Playoff. Daniels stock is almost exactly where Bailey Zappe, a fifth round pick in last spring’s draft, was before he was elevated to a starter.

Rapidly becoming one of my favorite players in the country, Duggan is a throwback. He just drops back and le’s it fly. That’s a good strategy when Quentin Johnston is on the outside, but no QB in the country is more effective deep.

His 14 TD of 20+ yards and 11.5 AY/A are each most in the country. He’s thrown multiple TDs in every full game he’s played and at least three in all but two contests. 24 touchdowns and two interceptions overall, third highest TD percentage, and most importantly, undefeated.

Duggan’s price has risen 21% this season. So, users who knew he would break out and invested $1,000 with his 3x Multiplier would have profited $300 since the beginning of October!

Bo Heisman? Nix continued his strong season last week against Colorado with a rushing, receiving, and passing TD all in the same game. Overall, he’s one of the most statistically impressive players in the country.

He’s the only player in the country averaging over 9 yards per attempt and 6 yards per carry while dragging Oregon to a top 10 ranking and national acclaim. Run the table, and Nix could even get into the Playoff.

Kudos to anyone who saw Nix turning his career around before this season. A $500 investment into Nix with his Multiplier would be worth more than $1,000 today!

Jekyll and Hyde: Hartman has the most negative plays (interceptions, fumbles, and sacks) among all P5 QBs along with the seventh highest TD%.

He will have his work cut out for him against Maye and the Tar Heels on Saturday night, expect a shootout.

Prices are current as of 11/11/22 at 12:00 PM
James Schiano is a full time employee of Mojo. All trades you make are with Mojo, which sets the lines as the “house”. Recommendations are for entertainment purposes only. Please use your own judgment and data to make trades. 21+. Must be in NJ to trade. Gambling Problem? 1-800-GAMBLER
About the Author: