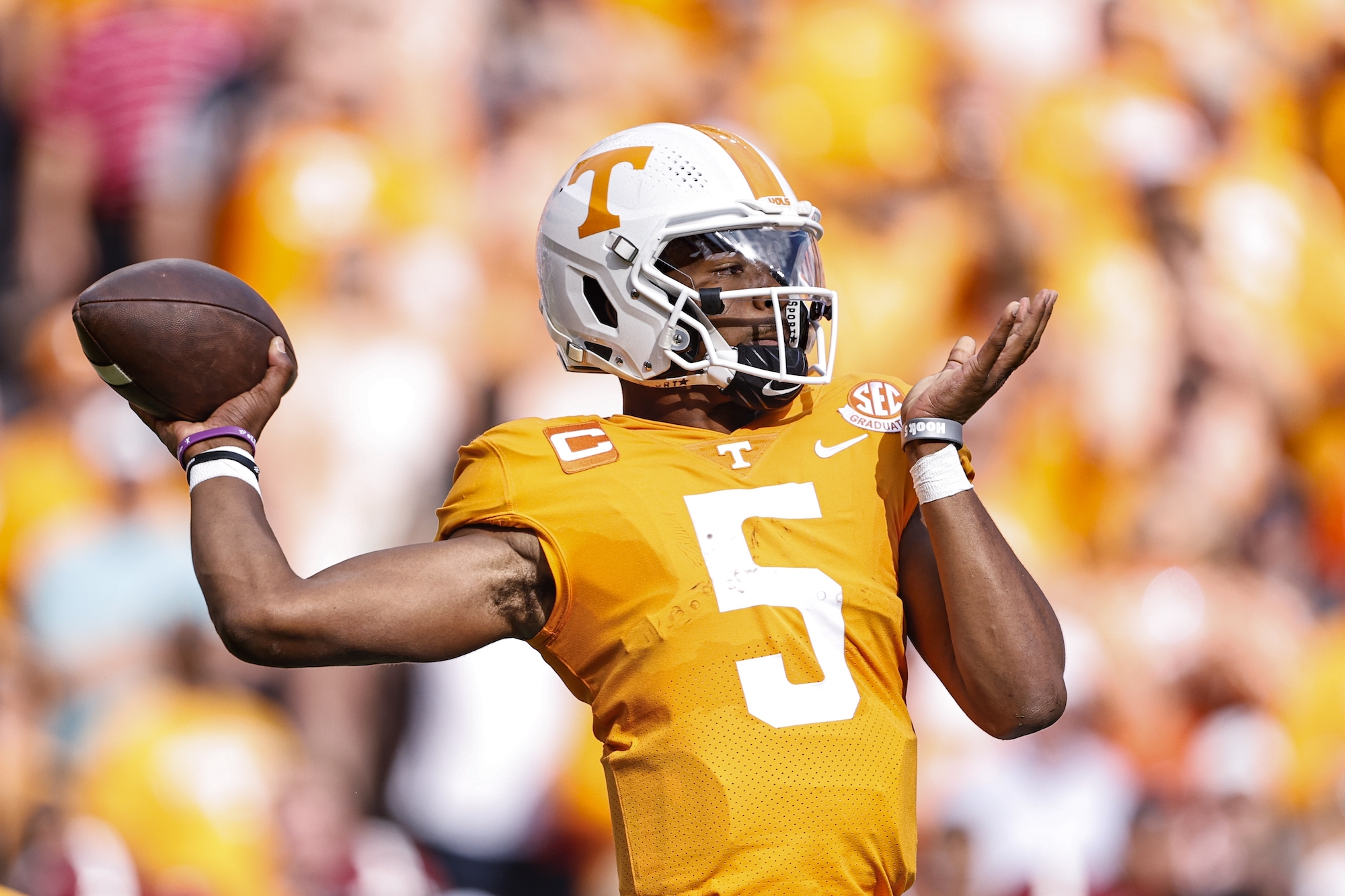 The defending Heisman Trophy winner is visiting Death Valley for the first (and probably only) time in his college career this Sunday. While LSU is trending up, it would be a surprise for Young to struggle with the Tigers.

He’s the highest graded passer in the country per PFF and sixth in adjusted completion percentage among Power Five quarterbacks. Yet, Young’s escapability is likely his best trait.

Pressure to sack rate is a relatively new stat that sets out to determine how well QBs avoid sacks by taking how many times they’ve been sacked and dividing by their total pressures. Young is 13th best by this metric, and that’s against SEC defenders. His mobility and elusiveness will be on display this Saturday.

Without what’s considered prototypical size, Young’s stock is a step below other players who have been drafted number one overall. He’s still cheaper than Jared Goff and half the price of Trevor Lawrence!

A rocky three quarters against Penn State and late deficit melted away in a matter of five minutes for Stroud last week. He dominated the fourth quarter to vault Ohio State past the Nittany Lions for their eighth consecutive victory.

However, these slow starts are becoming somewhat customary for Stroud. There was some uneven footwork and a few missed passes. Perhaps we just expect perfection from the potential number one pick next spring.

Coming off his worst game of the season, Ewers will have to get his act together quickly before heading to Bill Snyder Stadium and a date with Kansas State’s 11th ranked defense.

Ewers threw a remarkable 30 incompletions in Texas’ disappointing loss against Oklahoma State. The wild affair dropped his completion percentage under 60% on the season.

He might be trying to push the ball down the field a little too much. His average depth of target was 13.5 last week and sits at 11.6 on the year. Not saying he can’t make such throws, just that he needs to start acting like the generational QB he was billed as if Texas wants to win this week.

Fresh off his dominant win against Kentucky, Hooker has another huge test this week against Georgia’s vaunted defense. Still, it’s hard to bet against Hooker after the season he’s had.

Beating Alabama and Kentucky are one thing, Hooker is also statistically impressive. He’s thrown multiple TDs in every game this season, has a 21:1 TD to interception ratio, and trails only CJ Stroud in adjusted yards per attempt. He’s a stud

Now the Heisman favorite after opening at +6600, Hooker has been one of the biggest risers in our college football market at +36% since his IPO. A $500 investment on Hooker with his 3x Long Multiplier would be worth $1,045 right now!

Last week was something of his coming out party with five TDs against rival Pitt and three fourth quarter touchdown drives to ice the game.

He leads all freshmen by a country mile in AY/Att and looks like a genuine Heisman contender. Despite significantly better production and rising draft stock, he’s cheaper than Ewers.

Do yourself a favor and watch this kid play on Saturday.

Clemson and Uiagalelei struggled last week against Syracuse. So much so that Dabo Swinney yanked his starter in favor of Klubnik and that move sparked a dramatic comeback victory.

The kicker: Klubnik didn’t play all that well either, putting water on the idea that he could take this job. Swinney also confirmed Uiagalelei would remain the starter after the game.

He built some good will with 17 TD and just two INT through the Tigers’ first seven games, but Klubnik is lurking and the stark regression is troubling.

Uiagalelei's draft stock is highly variable right now and it's fair to question how much he will eventually produce in the NFL. He's priced similarly to Taylor Heinicke and Gardner Minshew: two quirky, underdog types without the physical tools of Uiagalelei but have found success on the field.

A poor start to the season hurt Richardson’s chances of being drafted in the first round. However, a solid five game stretch (seven TD vs 3 INT) is helping him build back some momentum.

There’s still a chance some NFL front office thinks his blend of size, speed (two 100 yard rushing games this year), and arm strength is worthy of a late first round selection. He’s priced more like a fringe second and third round player now, though.

The birth of a STUD. Weigman followed up his encouraging debut against South Carolina with a huge 338 yards, four TD game against Ole Miss last week in his first collegiate start.

The five-star true freshman was a top 25 recruit nationally and looks every bit like a future first round pick. Yet, he’s priced around other QBs who will likely never sniff the top of the draft. Another handful of good games and his stock will rise to or past his recruiting counterpart Klubnik.

The former Arizona State standout is coming on strong at LSU. He has 11 total TDs in his last two games and is averaging 65 rushing yards per contest.

Formerly known as more of a runner, Daniels has made tremendous strides as a passer. He has 12 passing TDs on the year versus one INT, the eighth highest adjusted completion percentage in the Power Five, and 14th best catchable target rate (an accuracy metric).

He has risen from being certainly undrafted to possibly sneaking into the first five rounds. His stock is up 25% since IPO and a $500 investment into Daniels’ career would be worth $918 now with his 3x Long Multiplier.

His comeback against Kansas State two weeks ago put him on the map and three more scores against West Virginia added to his lore. He has the fourth highest AY/Att in the nation: higher than Maye, Young, and Caleb Williams.

He’s all but assured his status as a draftable QB and is working in that same unconventional mold as Bailey Zappe and Minshew.

Prices are current as of 11/4/2022 at 1:00 PM
James Schiano is a full time employee of Mojo. All trades you make are with Mojo, which sets the lines as the “house”. Recommendations are for entertainment purposes only. Please use your own judgment and data to make trades. 21+. Must be in NJ to trade. Gambling Problem? 1-800-GAMBLER
About the Author: