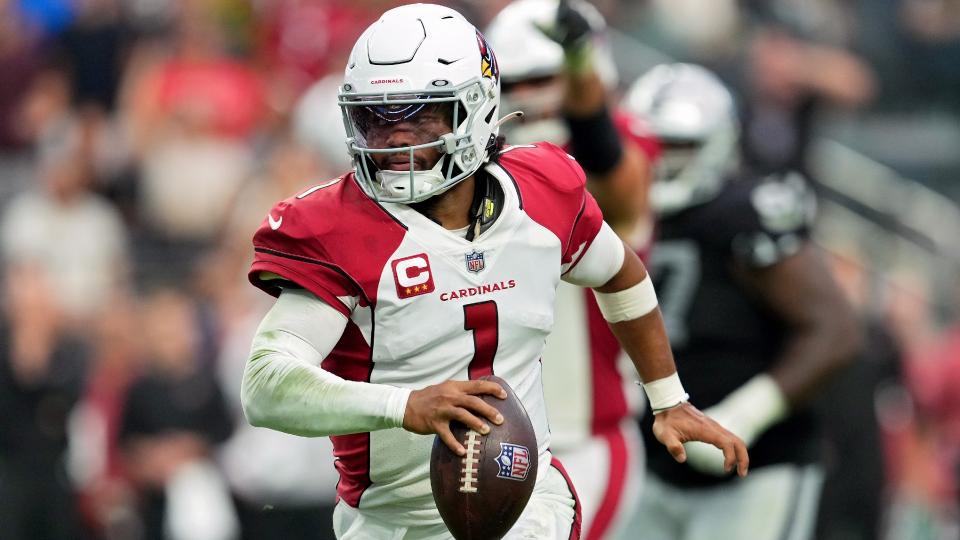 Kyler Murray is a polarizing quarterback, perhaps due to his unique style of play. He just engineered one of the most dramatic fourth-quarter comebacks in history. The Mojo market is not only unimpressed, his stock is actually down the past week. What is going on?

Aside from most of the fourth quarter on Sunday, Murray’s season has been a disaster. He’s averaging just 5.7 yards per attempt — 30th in the NFL. His air yards per completion, according to Next Gen Stats, is essentially tied for last with Aaron Rodgers. For seven of the eight quarters (plus overtime) played this season, the Cardinals have looked like the worst team in football. The offense under head coach Kliff Kingsbury’s design is averaging under 5.0 yards per play (23rd). The major offseason addition, putative field stretcher Marquise Brown, has 111 yards on 17 targets, even worse than his terrible efficiency in 2021 for Baltimore. The Cardinals are allowing a whopping 2.7 more net yards per pass play (including sack yards and sacks as pass plays), next to last (Rams are last). So we’re looking at a young QB who is probably going to be on a losing team and perhaps a terrible team and who will likely have a new coach next season. While he got his money, Murray is hardly primed for takeoff. I’m agreeing with the market here. HOLD.

Let’s stick with the young quarterbacks and look at Joe Burrow. His price is flat the last week and actually up 3.5% over the past month. He is expected to achieve a whopping $58 in future value (out of his $71.30 at the time of this writing). Is anyone watching these games? We figured the Bengals offensive line would be better. It’s not. It actually may be worse. Burrow has no time to throw. He’s been sacked 34 times in his last seven games. That’s a pace for 83 sacks for a full season. But of course Burrow won’t have a full season if he gets sacked 83 times. The constant pressure has crushed his performance, as the Bengals are last in sack-adjusted passing yards per game and 28th in straight YPA that ignores sacks. That’s shocking for a QB who had an 8.9 YPA last year (fourth all-time minimum 500 attempts). In addition, the Bengals are 0-2 and do not seem on track for even a playoff berth, never mind a Super Bowl return. Note the Bengals are 31st in yards per play and are a million miles from being the explosive offense we expected. Granted, they have drawn two solid defensive teams in Pittsburgh and Dallas. SELL.

Let’s look beyond QB at the breakout fantasy wide receiver in 2022, who was also the breakout fantasy wide receiver to end the 2021 season, somehow – Amon-Ra St. Brown. People looked at the lack of pedigree as a fourth-round pick and largely ignored his massive breakout to end the 2021 campaign. But he’s looking like the new Cooper Kupp in this Rams-styled offense with, of course, Kupp’s former QB in Jared Goff. St. Brown on Sunday became the first receiver in NFL history with at least eight catches and a touchdown in eight consecutive games. He also had a 58-yard run on Sunday. Yet at age 23 he only has $12.96 of future value? Should he be so far behind Justin Jefferson in future value ($18.03)? Should DJ Moore be within a buck of St. Brown’s future value when St. Brown is two years younger and when Moore has just nine games of 8+ catches in his career? St. Brown has a current STREAK of eight such games. Bottom Line: Brown should be up well more than 2.3% in the last month. BUY.