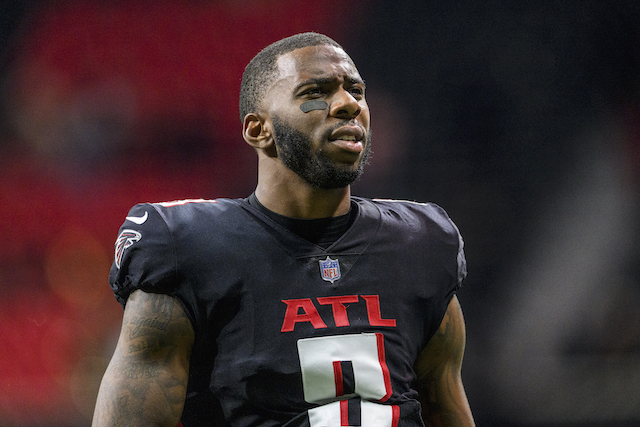 Kyle Pitts is a generational talent. But it might not be his year. He isn’t having the best start to his sophomore season under head coachArthur Smith who is determined to run the ball at a rate that would make 1970's coaches proud. Pitts' share price in the beginning of September was at a high of $16.62. Since then, it’s been in a bit of a free fall. The first-round pick is averaging 2.7 receptions per game after seven weeks of football. Not good. While the Falcons are 3-4 2nd place in the NFC South, it doesn’t look like much is going to change this season when it comes to the offensive game plans. The Falcons trailed by three scores for most of their Week 7 loss to the Bengals... and they still threw it only 28% of the time. The Falcons are currently top five in rushing yards per game and rushing attempts per game. On the season they are running it 58% of the time. I would Go Short on Pitts this season with his multiplier until there is a change of offensive scheme. When that happens, watch out: Pitts is being targeted at the 2nd highest rate on his routes run among tight ends, behind only Mark Andrews.

Dak Prescott is back as the starting quarterback after suffering a broken thumb in Week 1. Gallup also made his return this season in Week 4, but he has been very underwhelming. We all expected Dak to be able to get Gallup going with their previous chemistry together, but he finished Sunday’s game with zero catches on two targets; playing fourth banana among starting pass catchers behind CeeDee Lamb, Noah Brown andDalton Schultz. He only has one game this season where he had more thantwo catches.  Brown in particular may be the cause for his underwhelming performances.

Gallup has banked $5.20 in Mojo value and the market thinks he’ll earn $3.93 more before he retires, but at this rate it's hard to believe. I would Go Short on Gallup with his 7x Multiplier.

Let’s Ride the SHORT train here with Sutton dealing with poor performances from his quarterbacks and the light at the end of the tunnel just seems so far away. Russell Wilson did not play on Sunday due to a hamstring injury. Backup quarterback Brett Rypien did not deliver in Sunday's loss to the New York Jets, nor did he seem inclined to lock on to Sutton the way Wilson had in Weeks 1-6. Sutton did not see his first catch until the 3rd quarter and finished the game with just three catches for 23 yards. If Wilson misses more games this year, it would be a tough blow to Sutton, whose share price dropped about 6% with his multiplier on Sunday. Sutton has more future value than Alec Pierce, Skyy Moore, Davante Adams, Amari Cooper and Darnell Mooney. I think that's too high of expectations, which is why I would Go Short on Sutton with his 3x Short Multiplier.

Learn about Shorting on Mojo here.

Prices are current as of 10/24/22 at 3:45 pm EST
LaQuan Jones is a Contributing Writer on Mojo. All trades you make are with Mojo, which sets the lines as the “house”. Recommendations are for entertainment purposes only. Please use your own judgment and data to make trades. 21+. Must be in NJ to trade. Gambling Problem? 1-800-GAMBLER
About the Author: